ATHENS — Hundreds of migrants gathered in a field next to a refugee camp in northern Greece on Friday, and scores more occupied the tracks of Athens’s central railway station, reacting to what the United Nations and the Greek government said were false rumors that restrictions keeping them from traveling to Northern Europe would be lifted.

Greece restricts migrants’ movements under an agreement reached to stem a Europe-wide refugee crisis in 2016. Tens of thousands remain in camps that often have deplorable conditions, even after a sharp fall in arrivals and a legal judgment that overturned some rules for new migrants. 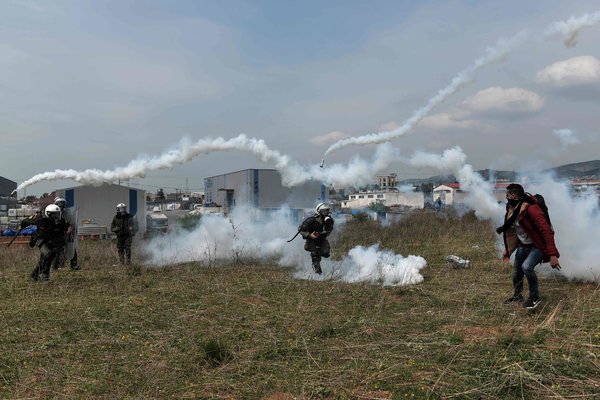 Crowds started gathering next to the Diavata camp near Thessaloniki on Thursday, and by Friday morning more than 1,500 migrants had converged, pitching hundreds of tents. Video footage showed the migrants trying to breach a police cordon and officers firing tear gas to disperse them.

In Athens, about 200 migrants occupied the central Larissis train station, which Trainose, the company operating the Greek railroad service, said would remain closed until further notice.

More than 600 migrants had gathered at the station Thursday night, keen to board trains to Thessaloniki and make their way northward, encouraged by social media reports from a group calling itself Glitter of Hope Caravan declaring that borders would open at noon on Friday.

When they were prevented from boarding trains Friday morning, scores clambered onto the tracks and refused to leave. Some laid down on the tracks in a symbolic protest; others pitched tents on the platforms while children chased each other and played over the tracks.

Their numbers had dwindled by Friday afternoon as representatives of the Greek Migration Ministry and the United Nations refugee agency, the UNHCR, managed to persuade many to leave.

“This is false information, the borders aren’t opening,” said Boris Cheshirkov, a spokesman for the refugee agency. “It’s risky and dangerous for people to try and cross,” he added.

Greece’s migration minister, Dimitris Vitsas, struck a similar note. “It’s a lie that the borders will open,” he said, and urged migrants to return to the state-run camps from which they had come.

Not all those at the station had somewhere to go, however.

Ali Elmishal, 11, from the Syrian city of Raqqa, was there with his parents and five siblings. He said the family slept in parks in central Athens and that he sold tissues at traffic lights. “We want to go to Germany,” he said in English.

Mohamed Ali Al Khalid, 25, who arrived in Greece three months ago, fleeing poverty and strife in Idlib, Syria, also wants to travel to Germany, to join his sister in Frankfurt, he said. “There’s no work for me here, there’s nothing here,” he said, standing on the train tracks with a suitcase at his feet, saying his wife and two children were back in Idlib, awaiting an update.

Others said they did not care where they went, but just wanted to leave Greece. “We don’t want any trouble,” said Mohit Haiar, 29, from Afghanistan. “We just want to go to any country that accepts me and where I can find work.”

Mohamed Osman, 26, from Damascus, said he was fleeing a conviction for deserting the Syrian Army. He said that plainclothes officers had arrested him and dozens of others Thursday night before releasing them on Friday morning. A police spokesman said he had no knowledge of such arrests.

A handful of migrants who had the money hailed taxis to go northward, said Ayman Slidi, a spokesman for the Syrian community in Athens who was at the sit-in. “Some paid 500 euros to get taxis, others have started walking,” he said.

Friday’s gatherings were reminiscent of a larger-scale upheaval in 2016, at the peak of Europe’s refugee crisis, when thousands had gathered in the northern Greek region of Idomeni, creating a makeshift camp and attempting to cross the border.

The flow of migrants along what has since become known as the Balkan route then prompted a series of countries in Central Europe to seal their borders, trapping tens of thousands of people in Greece and increasing the pressure on the country.

A deal signed later that year between Turkey and the European Union lessened the pressure on Greece significantly, though migrants continue to try crossing from both the land and sea borders with Turkey.

Although the rate of the influx is a far cry from the thousands arriving on Greece’s Aegean islands daily in late 2015 and early 2016, the pressure on the Greek camps is high because of a slow asylum application process and the continuing reluctance of other European Union countries to share the burden of hosting refugees.