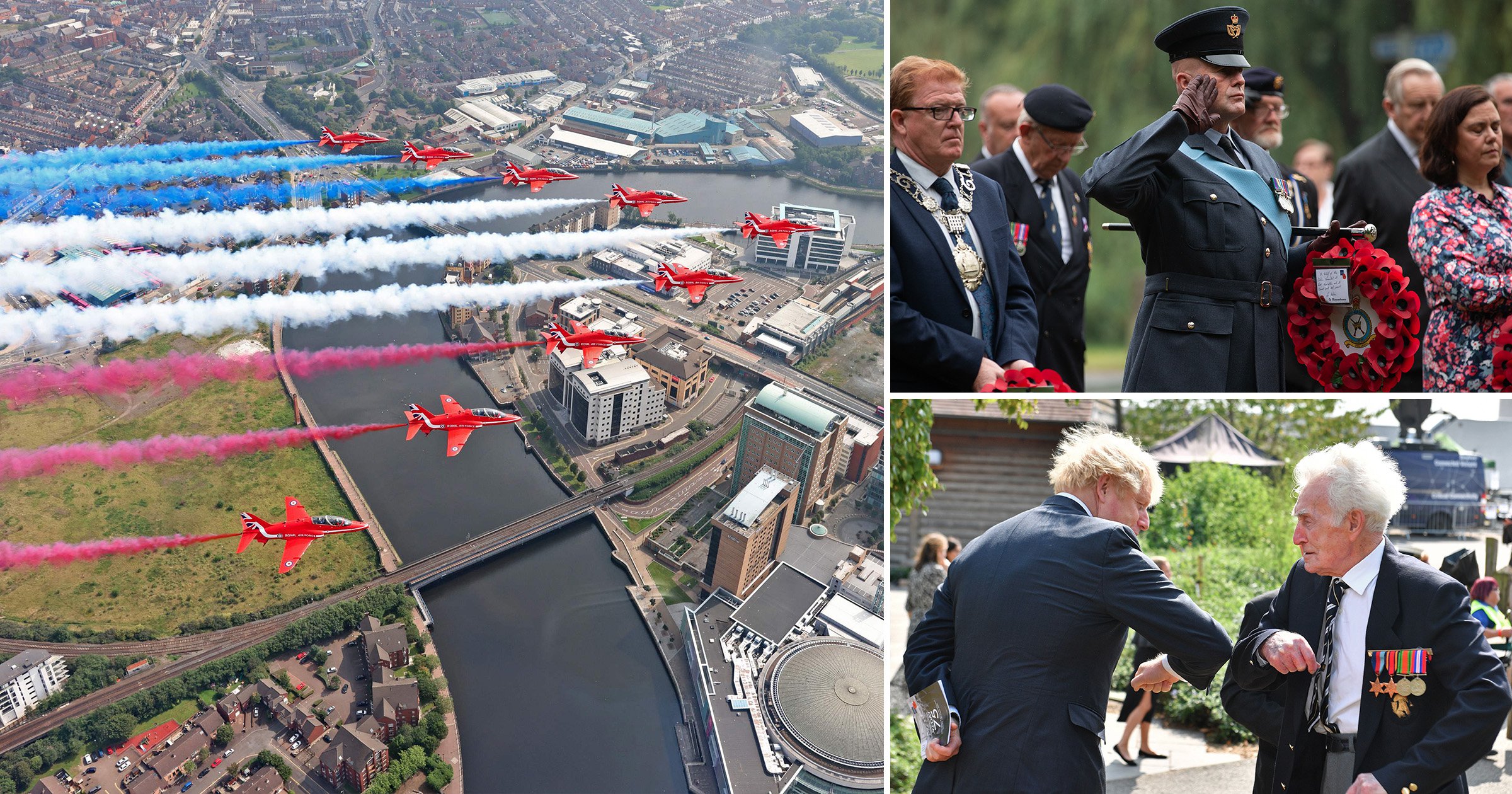 Britons eager to see the world-famous Red Arrows fly over London, Edinburgh and Cardiff commemorating VJ Day were left disappointed after they were cancelled due to cloudy skies.

In what would have been a first since the London 2012 Olympic and Paralympic games, the RAF’s Red Arrows planned to fly over the four nations’ capital cities to commemorate the 75th anniversary of Japan surrendering to the Allied Forces, bringing World War Two to an end.

Sharing the news on Twitter, team leader and Red 1 of the Royal Air Force Aerobatic Team Martin Pert said: ‘Whilst it may be lovely weather in some parts of the UK, we’ve encountered lots of very low cloud across much of the kingdom.

‘This often means we have to fly at higher levels to preserve fuel to counter that same cloud on approach to destination airfields.’

A tweet from the Red Arrows’ account said: ‘Sadly, the appalling weather – as seen here on approach into RAF Brize Norton this afternoon – has forced us to cancel today’s flypast over London for #VJDay75. Very disappointing but safety always our first priority.’

In place of the cancelled Edinburgh flight, the iconic planes flew over Glasgow Prestwick Airport, where the aircraft landed to greet three Second World War veterans.

Whitson Johnson, Albert Lamond and Barney Roberts welcomed the pilots as they stopped to refuel, with the men exchanging stories of serving in the armed forces, three quarters of a century apart.

The flypast carried on to Belfast as scheduled at 2pm, flying over the city centre and cheering crowds.

Pilots passed the landmark Titanic building and the Harland and Wolff shipyard cranes as they flew up Belfast Lough, leaving red, white and blue trails in their wake.

The Red Arrows were due to fly over the Welsh capital at 2.40pm before landing at Cardiff Airport, where crowds had braved the rain to await them.

Ground crew from the flight did meet Second World War RAF veteran Ray Taylor, from Ton Pentre, Rhondda, who saw service from 1942 to 1946 as a gunner and parachutist.

The Red Arrows had planned to fly directly over the Royal Hospital Chelsea in London, home of the Chelsea Pensioners, including three Burma Star recipients, at 5.30pm, before the event was cancelled.

Earlier today the Queen led tributes to those who ‘fought so valiantly’ to defeat the Empire of Japan.

She said: ‘Those of us who remember the conclusion of the Far East campaign, whether on active service overseas, or waiting for news at home, will never forget the jubilant scenes and overwhelming sense of relief.’

Prince Charles and Camilla, Duchess of Cornwall and Prime Minister Boris Johnson all took part in an emotional wreath laying ceremony at the National Memorial Arboretum in Staffordshire and were joined by several veterans.

In a moving speech, the Prince of Wales said: ‘Today, in this hallowed place, and in the presence of all those gathered here, or in their homes, or wherever they may be, let us affirm that they and the surviving veterans are not forgotten.

‘Rather, you are respected, thanked and cherished with all our hearts, and for all time.’