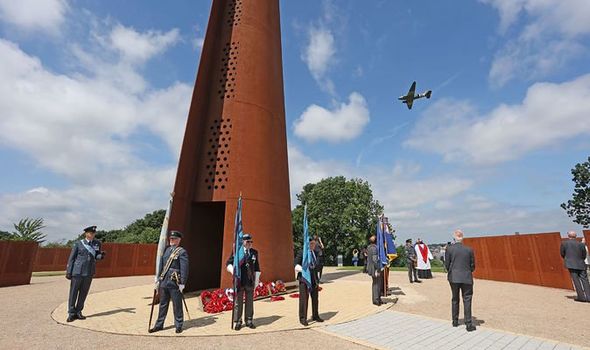 There were a few tears as eyes turned skywards for the flypast by the Dakota paratrooper transport plane of the RAF’s Battle of Britain Memorial Flight, itself a veteran of the Second World War. Bomber Command was key to defeating the Nazis, making frequent bombing raids on targets in Germany – but at a terrible cost: out of 125,000 aircrew, 57,861 lost their lives – at an average age of 23.

But nothing was going to keep survivors from attending yesterday’s ceremony at International Bomber Command Centre in Lincoln.

Daily Express readers donated £140,000 to the building of the complex, which opened three years ago. At its heart is a steel spire – its 101ft height equalling the wingspan of a Lancaster bomber.

It is surrounded by panels with the names of Bomber Command personnel who died in the war.

The £16million centre also has a museum and an archive of more than four million log- items, including crew logbooks and interviews. An emotional 45-minute service yesterday included the laying of wreaths.

Peter Francis, 95 – a Halifax rear gunner on one of the last raids on Germany – travelled from his Cornwall home and said: “It is vital to remember those we lost.”

He said: “I was due to fly on a special operation from Lossiemouth in Scotland but I was on leave…John ‘Jock’ Downie took my place. There was a mid-air collision and he lost his life. His name is now here on the wall.”

One-time Lancaster gunner Bert Hammond, 96, now lives nearby in Leasingham and made the short trip to honour his pals Richard Duffield and George Chapman, whom he had followed into the RAF.

Bert said: “Neither of them made it back. I just wanted to come here and see their names.”

The complex was sited in Lincolnshire because 27 wartime Bomber Command stations – more than a third – were in the county.

Nicky van der Drift, its chief executive, said Bomber Command “defended our freedom, supported humanitarian missions and helped to keep the peace. Without the bravery, service and sacrifice of those who served and supported their work, the war could not have been won.”