Her Majesty had been visiting the Vatican in a symbolic meeting before they discussed hopes on how to progress Christian unity ahead of a summit. The visit came 20 years after they had originally met and was part of a four-day visit to Italy. But it appears that moments after the frail John Paul II had shaken hands with the huge number of people in the Queen’s entourage, the monarch opted to make a joke to break the silence.

She turned to John Paul II, who sat next to her, and said: “We’ve bought a lot of people with us I’m afraid.”

Smiling, the Queen then shared a laugh with John Paul II before photographs of the pair, alongside Prince Philip, were taken.

Discussing the visit, the Queen said “it was a great pleasure to the Pope again”, and both recalled their previous visit – when John Paul II came to Buckingham Palace in 1982.

The pair then exchanged gifts, which included “50 facsimile prints of Canaletto drawings bound in leather for the Pope, and a facsimile copy of a 13th century illuminated New Testament from the papal library for the Queen”. 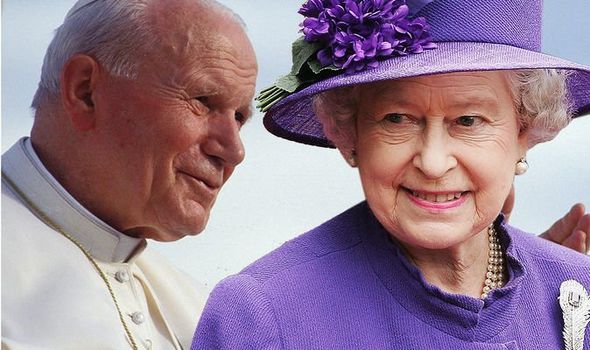 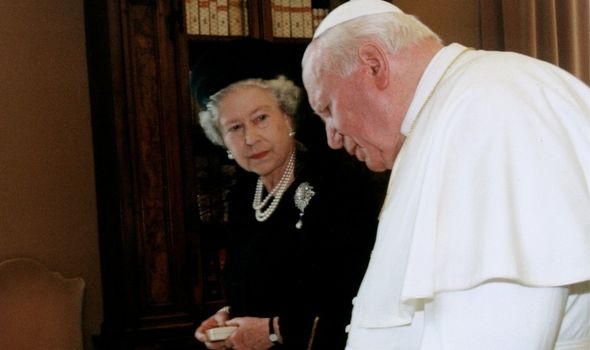 The Queen said: “We have a huge collection of Canalettos and I hope this will be of interest for the library here.”

She concluded upon accepting the Bible: “How very kind, how generous, what wonderful illustrations. These will go back into our library at Windsor.”

They also read speeches when the pair met in 2000, with the Queen thanking the Pope for his help with the Troubles in Northern Ireland, which involved Roman Catholics and Protestants.

Details from her iconic visit also emerged last year after the Queen’s royal dresser Angela Kelly recalled how she nearly made a “fashion faux pas” ahead of her meeting with John Paul II.

JUST IN: Zara Tindall: Why does the Queen’s granddaughter not have a title? 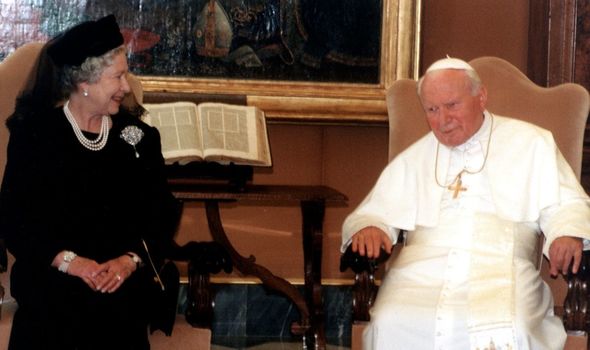 Writing in ‘The Other Side of the Coin, the Queen, the Dressers and the Wardrobe’, Ms Kelly explained that Her Majesty was initially told to wear a “colourful outfit”, something the monarch “knew would be a mistake”.

Before the meeting, Ms Kelly told the Queen that a bright outfit “would not be appropriate for a meeting with his Holiness”.

Despite this intervention, the Queen’s Private Secretaries’ insistence on wearing a bright outfit continued as they wanted the meeting to “look like a fun day out”.

But Ms Kelly said: “I asked her to go back to the Secretaries and ask them to do their homework. 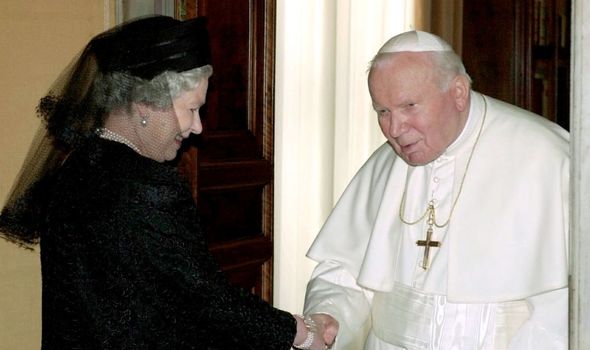 “I considered it to be bad advice. I sensed that Her Majesty was starting to feel torn as to whose advice to take.”

Ms Kelly was adamant that the Vatican would not suggest a day dress “because it would be inappropriate”.

She added: “If the Queen turned up for such an important meeting in a day dress, where would it all end? I felt that standards would start slipping…I insisted once more that the Pope would not expect guests to arrive in such informal dress.

“I simply would not dress the Queen this way and at this point, Her Majesty just wanted the matter to be sorted.”

The Queen eventually opted for a black outfit for the meeting 20 years ago.