Buckingham Palace has released the full details of this year’s Trooping the Colour. The palace confirmed the Queen won’t mark her official birthday in London with a parade surrounded by her family and members of the public.

As it happened in the midst of the first national lockdown last year, the Queen will view a military parade in the Quadrangle of Windsor Castle.

The parade will be held by the Household Division, while King’s Troop Royal Horse Artillery will fire a 41 gun royal salute from East Lawn.

Unlike in 2020, the Queen won’t watch the parade alone in the company only of two trusted aides.

This year, her first cousin and working member of the Royal Family Prince Edward, Duke of Kent, will join her. 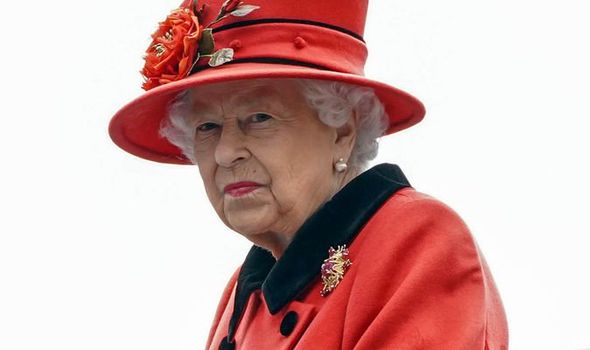 Making previously rumoured plans official, Buckingham Palace said in a statement shared today: “The Queen will view a military parade in the Quadrangle of Windsor Castle to mark Her Majesty’s Official Birthday, on Saturday 12 June.

“The parade will be held by the Household Division, and The Queen’s Colour of F Company Scots Guards will be trooped.

“His Royal Highness The Duke of Kent, Colonel, Scots Guards, will accompany The Queen.”

The statement went on to provide details regarding the parade.

It read: “The parade will be led by the Foot Guards, who will be joined in the Quadrangle by The King’s Troop Royal Horse Artillery and the Household Cavalry Mounted Regiment.

“Music will be played by a Massed Band of the Household Division, which will include the 1st Battalion Scots Guards Pipes and Drums.

“Upon The Queen and The Duke of Kent’s arrival in the Quadrangle, Her Majesty and His Royal Highness will be greeted by a Royal Salute, and the National Anthem.

“The parade will commence with the Musical Troop as the Band plays.

“The Colour will then be trooped through the ranks, and the parade will conclude with a second Royal Salute.

“The King’s Troop Royal Horse Artillery will then fire a 41 Gun Royal Salute, to mark Her Majesty’s official Birthday, from the East Lawn at Windsor Castle.”