Home » Europe » Pubs new rules: What are the new rules in pubs?

Pubs new rules: What are the new rules in pubs?

Pubs only reopened again relatively recently in the UK, and people all over the country have enjoyed drinks once again following months of closure. The UK seemed on the edge of returning to “normal” recently, as declining cases allowed people to gather in groups of 30 at maximum. But the latest measures will reduce group sizes to just six, and has thrown into question the future for pub and restaurant opening times.

What are the new rules in pubs?

The initial measures would include gathering reductions only, but officials are allegedly toying with introducing potential curfews.

They have not confirmed this yet, but if they did it would threaten opening hours for pubs and other hospitality venues. 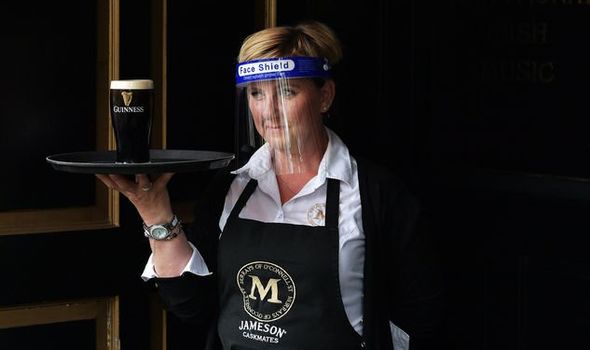 Nevertheless, the possibility remains, and local lockdowns imposed by the Government elsewhere have included soft restrictions on some pubs.

City-wide lockdowns, including those like the most recent in Bolton, have asked pubs and restaurants to return to delivery and takeaway only.

Devolved administrations have also set their own rules on pub-goers, with the Welsh government insisting they check patrons hail from the same household.

Welsh health minister Vaughan Gething put restrictions on both public and private gatherings in Caerphilly but allowed the hospitality sector to remain open.

He has clamped down on the county amid a spike in cases which have made it the second-worst affected area in the UK behind Bolton.

Part of the latest measures have included a warning from Mr Gething for pubs to pay close attention to their customers.

He said they would need to question whether they come from the same household, despite little evidence COVID-19 spreads in the setting.

Mr Gething said: “All pubs and restaurants need to look at their customers coming in and ask themselves, well [is that] really a group of people from a single household.”

DON’T MISS
Martin Lewis: How to get money back from your travel insurance – INSIGHT
Lindsay Hoyle threatens to run Matt Hancock ‘ragged’ after major snub – VIDEO
Coronavirus lessons ‘could help citizens in the event of nuclear bomb’ – ANALYSIS

“If people are taking bookings from a dozen people sitting at the same table, I think people really need to be asking themselves whether those are people following the rules.”

While the rules will likely prove useful in cornering new cases of the disease, publicans have shown mixed reactions.

Speaking to the BBC, Glyn Davies, who runs the Smith Arms in Pengam, said it was an impossible ask to get people to reveal whether or not they come from the household.

He added confirmation would require strict and likely unnecessary checks.

Mr Davies said: “How can you do that? You can’t call people liars.

“You’d have to get people to bring birth certificates in.”

New pub landlord Mikaela Rees-Swindon told the broadcasters adding these rules would make it equally impossible to run their businesses.

She added: “We are being told we have to check tables are being booked for single household groups – well that’s my Saturday cancelled.”