Royal expert Robert Lacey believes Prince Harry is no longer been included among the representatives of his generation of royals alongside his brother and sister-in-law. Speaking to Newsweek, the royal author said: “It looks to me that the machine is moving forward, it’s promoting William and Kate as the face of their royal generation to the exclusion of Harry.”

The Duke of Sussex stepped down alongside his wife Meghan as senior royal at the end of March.

Ever since, the Sussexes have started to work on their charitable platform, Archewell, as well as focused their attention on issues not usually touched by the Royal Family, such as voter registration, the Black Lives Matter movement and social media.

In September, Meghan and Harry appeared in a video filmed for the Time 100 special to discuss the upcoming US election, described by the Duchess as the “most important of our lifetime” and warn against misinformation.

Following their appearance, Buckingham Palace distanced itself from the Duke’s remarks. 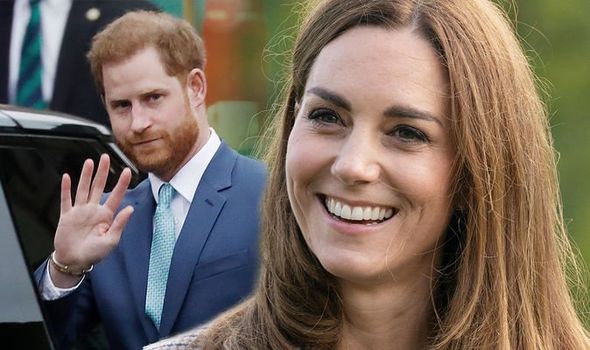 Asked to comment on the Sussexes’ clip, the palace said the Duke is no longer a working royal and senior member of the Royal Family.

“The Duke is not a working member of the royal family and any comments he makes are made in a personal capacity.”

Despite having stepped down, Prince Harry remains sixth-in-line to the throne.

His and Meghan’s son, Archie Harrison, is seventh-in-line.

Mr Lacey, author of Battle of Brothers, also spoke about the feud between Harry and William.

The expert pointed out Harry has been the only one to publicly acknowledge the split during the documentary Harry & Meghan: An African Journey.

“I think he should address it publicly.”

Speaking to ITV broadcaster Bradby, the Duke of Sussex said: “Part of this role, part of this job and this family being under the pressure it is under, inevitably stuff happens.

“But look, we are brothers, we will always be brothers.

“We don’t see as much as we used to because we are so busy but I love him dearly and the majority of stuff is created out of nothing.

The expert deems it necessary for William and Harry to come to an agreement before they meet in public.

Failing to look “genuine” would represent a danger to the Crown, he said.

The brothers are scheduled to attend on July 1 the unveiling of the statue of Princess Diana they commissioned.

They may also appear together at next year’s Trooping the Colour, if it will be resumed in its original form after the palace had to call off the parade this year due to the coronavirus pandemic, and to mark Prince Philip’s 100th birthday.

Speaking to Express.co.uk, Mr Lacey said: “The main players in this dispute will be standing there in the eyes of the public and the world.

“And the world will want to know: are these brothers now reconciled or are we looking at some sort of act, some sort of pretence for the public, something they feel they ought to do?

“Now, once people start suspecting the genuineness of members of the Royal Family and their behaviour, that’s the moment when danger starts.

“If people think it is just acting and not genuine, then that’s when they lose faith in the institution.”

Mr Lacey acknowledged the rift was born out of sensible differences between the brothers, who may never return to be as close as they used to be during their younger years.

However, if it were impossible for them to rekindle their relationship, Harry and William should agree to disagree and return to be at peace.

He said: “Now, I’m not saying that Harry and William have to reconcile by July 1.

“Maybe that’s not possible, they are human beings with profound differences between them.

“But if they have not reconciled, they will have to have reached some sort of civilised agreement to differ that everybody can accept.