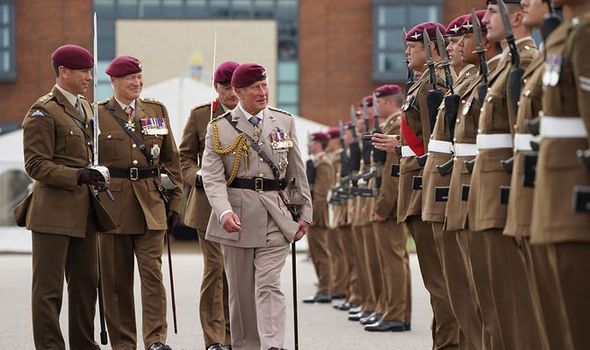 He was 23 and training as a jet pilot during a four-month attachment with the RAF when he leapt from an Andover aircraft on July 29, 1971. Charles said: “I must say, I find it hard to believe that it’s been 44 years since I became your Colonel-in-Chief.

“And nearly 50 years since I made my first parachute drop, initially upside down with my legs in the rigging lines, into Studland Bay, Dorset, where I was pulled out of the water by the Royal Marines.”

He added: “In that time, I have seen 10 Colonels Commandant and some 75 Commanding Officers come and go, at least 16 of which became Generals, some sat among us today.”

Charles – who arrived by helicopter – had the honour of presenting the regiment’s first new colours – ceremonial flags – since 1998. They are expected to last at least 20 years.

He said: “The colours I present today on behalf of the Queen continue to symbolise your loyalty and distinguished pedigree of which you can all be justifiably proud.”

A flypast of three Tiger Moth planes, two Apache helicopters and an A400M transporter plane followed, before the Red Devils parachute display team dropped into the parade square with red smoke trailing from their boots.

They presented Charles with a Denison smock, a type of jacket used by the regiment, that he wore on his first drop.

After the ceremony, the Prince spoke to more veterans at an outdoor reception.
Source: Read Full Article