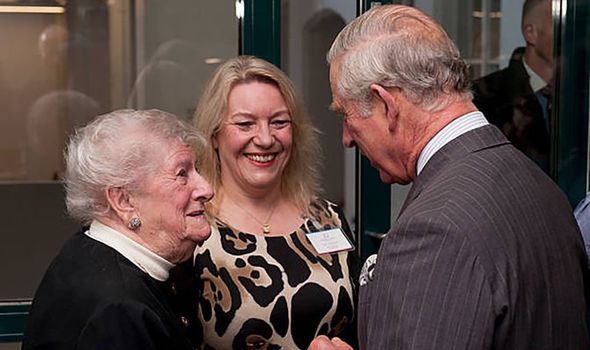 Marie Elizabeth Haddleton campaigned for decades against redevelopment and fought for buildings to be added to English Heritage’s conservation list. Her work was noticed by Prince Charles, who in 2014, met the community hero in Jewellery Quarter, Birmingham, to express his gratitude.

They were pictured talking at Birmingham City University’s School of Jewellery where the royal told her she was “Queen of the quarter”. Prince Charles later bought property in the Jewellery Quarter.

Birmingham Live reports that the pair built an “excellent rapport” during their meeting.

The city’s Jewellery Quarter is still home to Georgian buildings and is the birthplace of many pioneering advancements in industrial technology.

Marie died on Sunday July 18, but her family say her legacy will continue.

“Her main achievement was to fight off the urban village and get the Jewellery Quarter made into one, single conservation area,” said Marie’s son Mark.

“Originally it was divided into three different conservation areas, with strips of land between them known as ‘corridors’. Developers exploited this and built inappropriate housing.

“To further enhance the protection, many buildings were added to the English Heritage conservation list, or listed, making it even more difficult for developers at the time.

“‘Cannot’ was not often in her vocabulary.”

Marie was also the editor of The Hockley Flyer newsletter for almost 40 years, overseeing 432 issues.

Mark said he will continue writing the publication in her memory.

He added: “I have lost my editor, mum, who was my best friend.

“I’ve contributed for over 30 years but rarely had a chance to get a word in; she would let me write the editorial on only a handful of times.

“She would say, ‘what am I going to put in the editorial?’ I’d make a suggestion, but she would ignore it and come up with another one, often controversial.”

Marie, who was the daughter of a policeman, was described as a passionate and determined campaigner.

Andy Munro, who knew her for more than 20 years, said: “Prince Charles wanted to see the Jewellery Quarter’s architecture remain and Marie was passionate about not having boxed apartments.

“Prince Charles bought property in the Jewellery Quarter, which he later sold. There’s still gates in Branston Street with his name on, sort of his watermark, if you like.”

Andy, who is the former operations director for the Jewellery Quarter Regeneration Partnership, added: “Marie was a great defender of the quarter and to say she knew everybody is an understatement.

“She wanted to see the area continue as a working jewellery area. And whilst, like all manufacturing, there has been a substantial shrinkage; the fact you can still get almost anything jewellery related is partly down to Marie.

“She will be sadly missed.”

The trust said: “If Marie approved, then it was green light from the go. If not, forget it.

“She was a huge heritage source of all things JQ and had the ear of Prince Charles who dubbed her ‘Queen of the quarter’.