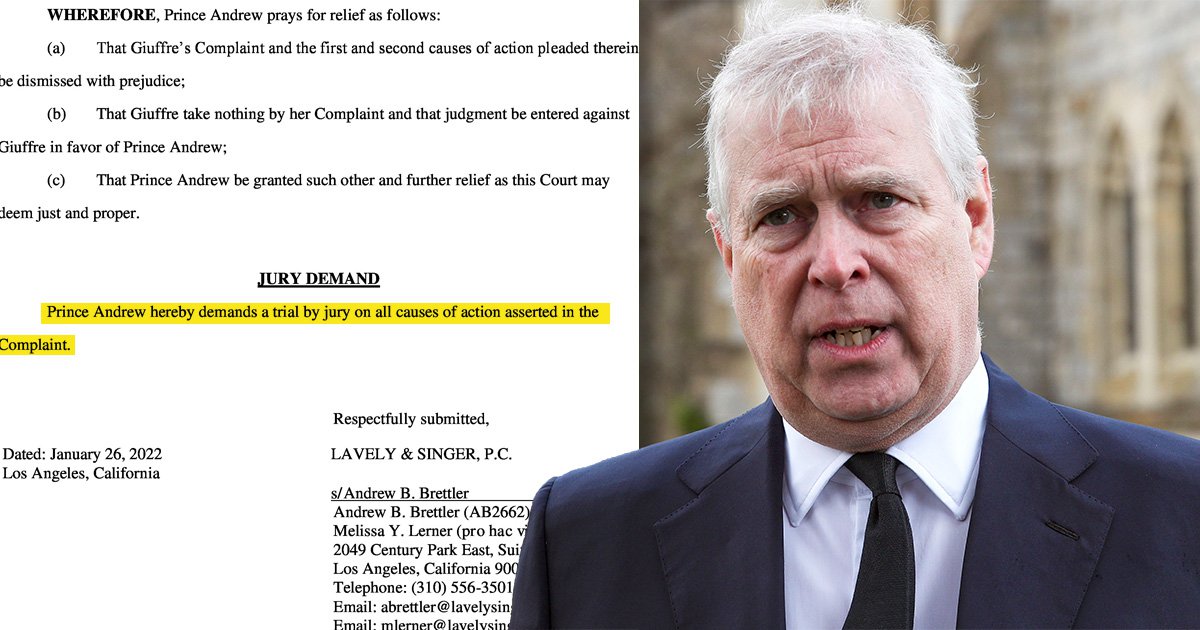 The Duke of York has officially responded to a sex assault civil lawsuit brought by Virginia Giuffre, saying he rejects the accusations and wants to fight them in court.

Documents filed today says he denies sexually assaulting her when she was under 18 and ‘hereby demands a trial by jury on all causes of action asserted in the complaint’.

The duke submitted 11 reasons why the case should be dismissed, including that Ms Giuffre’s claims are ‘barred by the doctrine of consent’ and by ‘her own wrongful conduct’.

Ms Giuffre, also known as Virginia Roberts, accuses Prince Andrew of sexually assaulting her in three different locations between 2000 and 2002.

In an 11 page document, submitted to the United States District Court for the Southern District of New York, lawyers for Andrew set out the duke’s response.

The paper sets out a series of defences ‘without assuming the burden of proof, and expressly denying any and all wrongdoing’.

This includes arguments that the claim should be dismissed because Ms Giuffre is a permanent resident of Australia and that by entering into a 2009 agreement with Jeffrey Epstein she ‘waived the claims now asserted in the complaint’.

Lawyer David Boies, who is representing Virginia Giuffre, said his client and legal team were anticipating ‘confronting’ the royal about his ‘denials’.

Mr Boies said: ‘Prince Andrew’s Answer continues his approach of denying any knowledge or information concerning the claims against him, and purporting to blame the victim of the abuse for somehow bringing it on herself.

‘We look forward to confronting Prince Andrew with his denials and attempts to blame Ms Giuffre for her own abuse at his deposition and at trial.’

Judge Lewis A Kaplan previously denied the duke’s application to dismiss the case.

After the decision, he said he would fight the case as a private citizen.

The Queen stripped him of his remaining patronages and honorary military roles as the monarchy distanced itself from the duke ahead of potentially damaging developments in his lawsuit.

Prince Andrew has consistently denied the accusations and is not facing criminal action either in the UK or US.