Tens of thousands of people took to the streets of Poland’s cities for a nationwide strike on Wednesday to protest a top court’s decision to ban nearly all abortions, even as the nation’s leading politician called on his conservative supporters to “defend Poland.”

The strike, which was mainly led by women, marked the sixth straight day of protest against the court’s action.

“You are smashing Poland to pieces, you’re endangering lots of people, you are criminals,” Jaroslaw Kaczynski, the deputy prime minister and leader of the ruling Law and Justice party, said addressing Parliament on Wednesday. The night before, in a video posted on Facebook and widely viewed by critics as a call to arms, he said it was time to “defend Poland, defend patriotism.”

“This is the only way we can win this war,” he said. 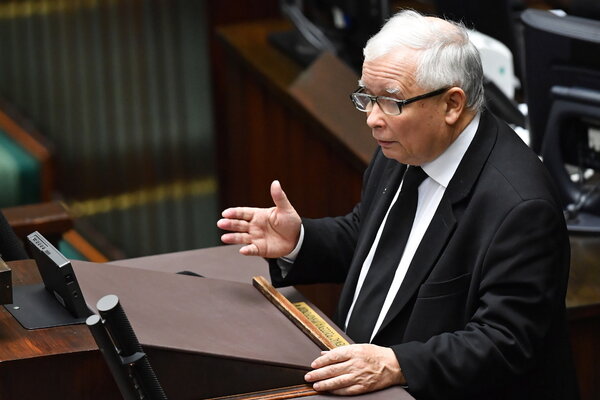 Thousands of women, joined by numerous men, poured from offices for the work stoppage Wednesday in dozens of cities, including Gdansk, Lodz, Warsaw and Wrocław, but also smaller towns, like Siemiatycze in eastern Poland, which used to be the stronghold of the Law and Justice party.

In Warsaw, a large crowd — most of them masked against the coronavirus — marched to Parliament, blocking traffic, and chanting “Come with us!” to the people watching from windows and balconies along the route.

Many of the protesters carried signs bearing anti-government slogans and umbrellas, which became the symbol of protests in 2016 against efforts to ban abortion.

“My uterus is not your playground,” one sign read. “I wish I could abort my government,” said another.

Since the country’s Constitutional Tribunal issued a ruling on Thursday that tightened what were already among the most restrictive abortion laws in Europe, cities and towns across the country have been convulsed by protests. The decision, which cannot be appealed, halted pregnancy terminations for fetal abnormalities, virtually the only type of abortion currently performed in the country. Pregnancies resulting from rape and those threatening the life of women are still formally legal.

Mr. Kaczynski’s call to crush the demonstrations threatened to further inflame an increasingly volatile situation in the country while it wrestles with the largest outbreak of the coronavirus since the pandemic began in the spring.

Women, many adorned with the red lightning bolt that has become the iconic image of the movement, have led the recent demonstrations but they have found support from a wide array of groups opposed to the government, including farmers and miners.

And, for the first time, public anger is also being directed at the Catholic church. Poland remains a deeply religious country and scenes of activists interrupting church services on Sunday

Right-wing extremists have been quick to seize on the protests.

Robert Bakiewicz, the leader of an ultranationalist group, said he would form a “Catholic self-defense” force to confront “neo-Bolshevik revolutionaries.”

“The sword of justice is hanging over them and, if necessary, we will crush them to dust and destroy this revolution,” he told reporters. “If the Polish nation isn’t able to give us this security, we will take action.”

His supporters clashed with demonstrators outside St. Alexander’s Church in the center of Warsaw this week and an image of one of them throwing a young girl from the steps of the church has been shared widely around the country.

Outside the Jasna Gora Monastery in Czestochowa, one of Poland’s holiest Catholic shrines, police deployed tear gas to separate protesters and nationalists, according to local radio reports. In Poznań, where protesters staged a sit-in at a cathedral, one young girl was badly beaten by nationalists who confronted the group, according to the local news website TenPoznan.

At another demonstration in Warsaw on Monday, a car hit two women participating in the protests. Some observers said it looked as if the car was driven into the crowd deliberately. One of the women was treated for injuries in hospital and later released, according to the police.

On Wednesday, Gazeta Wyborcza, the country’s largest daily newspaper, reported that the driver was a 44-year old government security officer from the Internal Security Agency. He was detained by the police, according to the authorities.

The conflagration of public unrest and the pandemic added to the uncertainty of the moment and led to a remarkable series of bitter exchanges in the Polish parliament.

Opposition lawmakers wore black and carried protest signs as they confronted Law and Justice members, and tried to approach Mr. Kaczynski on Tuesday.

Mr. Kaczynski, who was protected by Parliament’s security unit, denounced the opposition as “Russian agents,” while female Law and Justice lawmakers shielded him with their bodies.

Cezary Tomczyk, the parliamentary leader of the main opposition party, Civic Platform, accused Mr. Kaczynski of issuing a “call to lynching” and condemned what he said was the creation of “militias” loyal to the ruling party.

Mr. Kaczynski replied that it was the opposition that was fomenting civil unrest and endangering public health.

“You will be held accountable,” he said.

After they reached Parliament on Wednesday, the demonstrators tried blocking an exit, scuffling with the police guarding the building.

“Let’s do a lockdown for our parliamentarians,” said Marta Lempart, one of the Women’s Strike leaders, through a megaphone. “We will do everything not to let them get out,” she added.

“Until the Middle Ages finish in Poland,” added a voice from the crowd.