PM condemns violence as more than 100 arrested at protests

More than 100 people were arrested during a day of unrest in central London, which was condemned by Prime Minister Boris Johnson as “racist thuggery”.

As Black Lives Matter supporters gathered in Hyde Park, a crowd of people – some of them far-right activists – gathered in Parliament Square, where they were claiming to protect statues. Despite both groups being warned that they must be off the streets by 5pm or risk arrest, footage shows that a significant number of people defied that order.

In Parliament Square, some were accused of “thoroughly unacceptable thuggery” after they threw bottles and cans at police officers. Prime Minister Boris Johnson tweeted: “Racist thuggery has no place on our streets. Anyone attacking the police will be met with full force of the law. These marches & protests have been subverted by violence and breach current guidelines. Racism has no part in the UK and we must work together to make that a reality.”

“That is simply unacceptable and the individuals that are basically putting the safety of our police officers and the safety of the public at risk will expect to face the full force of the law.” 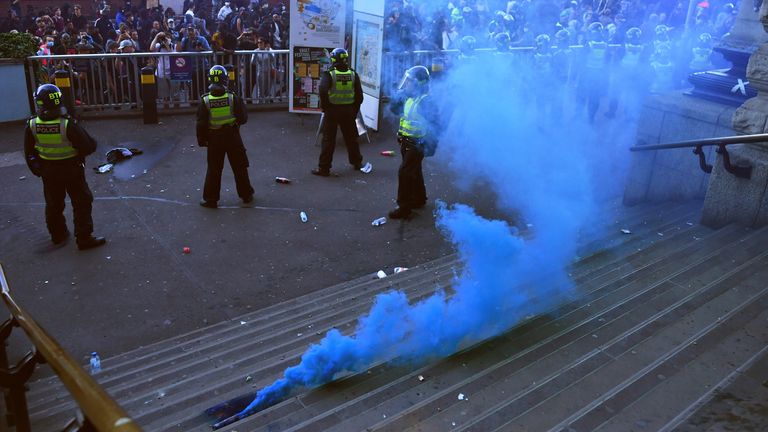 Mayor of London Sadiq Khan condemned the brutality aimed at police, writing on Twitter: “Millions of Londoners will have been disgusted by the shameful scenes of violence, desecration and racism displayed by the right-wing extremists who gathered in our city.”

And Metropolitan Police commander Bas Javid condemned those involved in the “pockets of violence directed towards our officers”. The London Ambulance Service confirmed it has treated 15 patients who were injured during the protests. Six members of the public were taken to hospital.

Those arrested were suspected of offences including breach of the peace, violent disorder, assaulting officers, possession of an offensive weapon, being drunk and disorderly, and possession of Class A drugs.

White said that, on Westminster Bridge, there were “quite ugly” scenes as some anti-racism protesters shouted and punched out at demonstrators attempting to reach Parliament Square.

“There were some Black Lives Matter protesters who were in there trying their best to stop their fellow protesters from attacking them,” he added.

Although there have been pockets of violence, White said the police had managed to prevent “widespread and sustained disorder”.

He described the demonstrators as a “disparate group” consisting of far-right activists from the English Defence League and the Football Lads Alliance, as well as members of the public and ex-servicemen and women who were genuinely concerned about statues being vandalised.

“There were some who were spoiling for trouble – just as there was on the other side among the Black Lives Matter protests last week and today,” White added.

At one point, “about 150 to 200” demonstrators ran into Hyde Park, despite officers trying to keep them separate from anti-racism protesters.

Sky correspondent Noel Phillips said a convoy of police tried to catch up with them – and said it appeared they were “intent on causing chaos and havoc”.

“There was a small altercation we witnessed when they entered the park – they were fighting with a young person,” he reported.

One 16-year-old who was attacked by those protesters told Sky News: “Nothing was really happening, there was no violence – and then I saw this big group of white men.

“I just went towards them and I was like ‘I don’t like you, you guys are racist’.

“One of the guys threw a bottle at me, some guy tripped me up, they all just ran towards me.

“I didn’t care though, I kept going. They were just reckless… disgusting.”

The violent scenes in Westminster contrasted with peaceful demonstrations that took place in Belfast, Glasgow and Bristol with crowds massing around monuments.

Avon and Somerset Police said around 300 people attended the demonstration in Bristol city centre, with two arrests made. 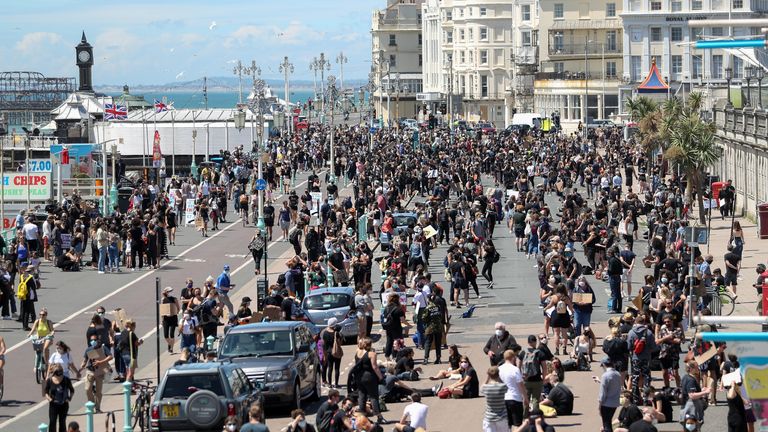 Meanwhile, in Brighton, more than 10,000 protesters attended a Black Lives Matter event in the city centre.

A Sussex Police spokesman said the demonstration was peaceful and no arrests were made. 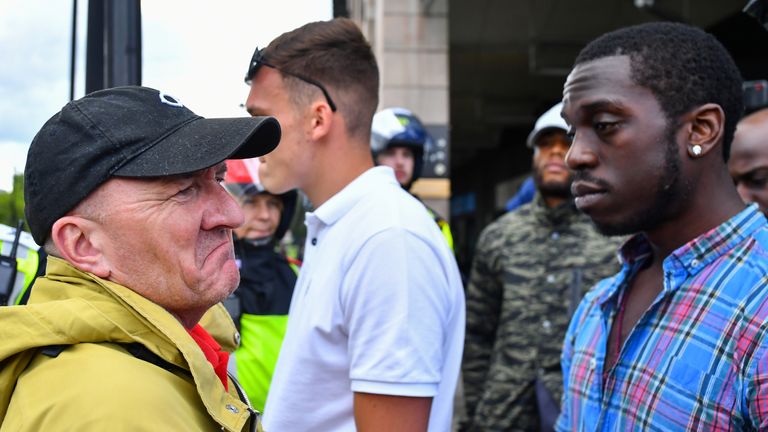 Race and Revolution: Is Change Going to Come?

Sky News will broadcast a global debate show on Tuesday night at 8pm – looking at the issues raised by the Black Lives Matter protests, and examining institutional racism and how we fix it.

If you would like to be part of our virtual audience, and have a chance of putting a question to our panel, please send your name, location and question to [email protected]