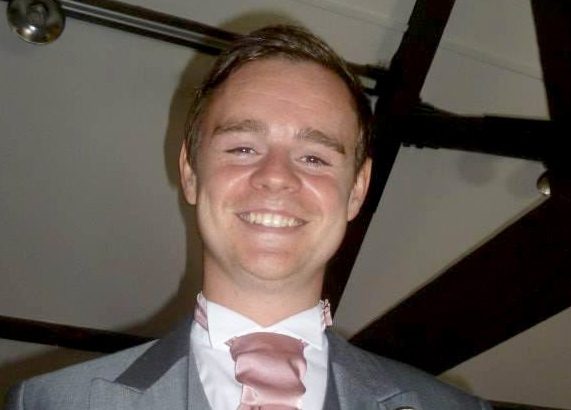 A father-of-two who was beaten to death while allegedly trying to fend off a gang of muggers from his girlfriend has been pictured.

Danny Humble, 35, was attacked in an underpass in Cramlington, Northumberland, as he walked home with his partner at 1am on Saturday.

He suffered serious head injuries, leaving his girlfriend to desperately knock on doors ‘screaming for help’.

The ‘devoted dad’ died in hospital the next day, and eight teenage boys, aged 16 to 18, were arrested on suspicion of murder. They have since been released under investigation.

Mr Humble, a welder who lived in the town, leaves behind two young children, his parents, a girlfriend, two brothers, and many friends, his family said.

Paying tribute, his mother Deb Humble said: ‘Danny was a devoted dad. He was a welder by trade and took great pride in his work but his first priority and most important job was always being a father.

‘He was a family man and very close to his two brothers, the Humble brothers – the ‘Three Musketeers’, as they were known to us.

‘He was also a great son, someone to be proud of, and a very loving boyfriend.’

She added: ‘We are lost without him – we are broken. Compassionate, hilarious and a good friend, he will be missed by so, so many, and his absence leaves a hole in so many lives.

‘If anyone has any information about what happened that night, please come forward and speak to police.’

Detective Inspector Joanne Brooks, leading the inquiry, said: ‘This was a tragic incident that has sadly resulted in the death of a much-loved father, family man and friend.

‘Our thoughts go out to Danny’s loved ones at this incredibly difficult time and they will continue to be supported by a team of specialist officers.

‘The family have requested that their privacy is respected and we urge everyone to allow them space to grieve.’

She added: ‘We know this incident has shocked the community of Cramlington.

‘As our investigation continues, there will be extra patrols in the area and I would urge anyone with concerns to speak to an officer.

‘We are absolutely committed to finding out the circumstances that led to Danny’s death, and I’d like to thank members of the public who have already been in touch passing on information that could assist detectives with this investigation.’

Anyone with information is asked to call Northumbria Police on 101 or call Crimestoppers on 0800 555111.