The widow of PC Andrew Harper has written a heartfelt poem paying tribute to her late husband, as his colleagues held memorials ahead of the first anniversary of his killing.

The 28-year-old officer was dragged to his death as he tried to stop three thieves fleeing after they stole a quad bike in Stanford Dingley, Berkshire, on 15 August last year. 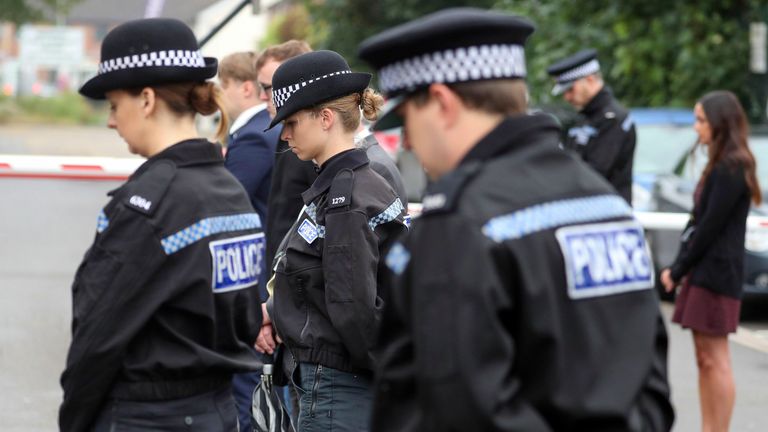 On Friday, 20 officers gathered outside Newbury Police Station in Berkshire to pay tribute to PC Harper.

Inspector Al Hawkett said: “We have all been deeply affected by Andrew’s death, whether we knew him personally or not.

“The senseless loss of a colleague is hard enough, but being newly married, made his death all the more heart-breaking.

“Andrew was a brave young police officer, killed whilst doing the job that he loved.” Insp Hawkett said there would be “no sense of closure” for the officer’s family and friends, and that his “tragic death is something that will stay with all of us forever”.

He later read out a poem written by PC Harper’s widow Lissie, before placing a wreath at the base of a half-mast flag outside of the station.

In the poem, Mrs Harper described her husband – who she had only married a month before his death – as “kind and strong without venom or greed”, and said she was lucky to be his wife.

“They will remember you now, so honest and true,” she wrote.

“You’re a hero now my boy don’t you see.

“The truth is my love, you always were to me, Lissie.”

Simultaneous services were also held in Abingdon, Oxfordshire, and at a police training centre in Sulhamstead, Berkshire, attended by members of PC Harper’s family.

Officers across the Thames Valley region also held a minute’s silence at 11am in his memory.

The attorney general has been asked to consider whether the sentences of PC Harper’s killers are unduly lenient and Mrs Harper has written to the prime minister to ask for a retrial after her husband’s killers were cleared of murder.

Ms Adlam says she wants those who injure or kill police officers to serve a minimum 20 year term as part of “Andrew’s Law”.