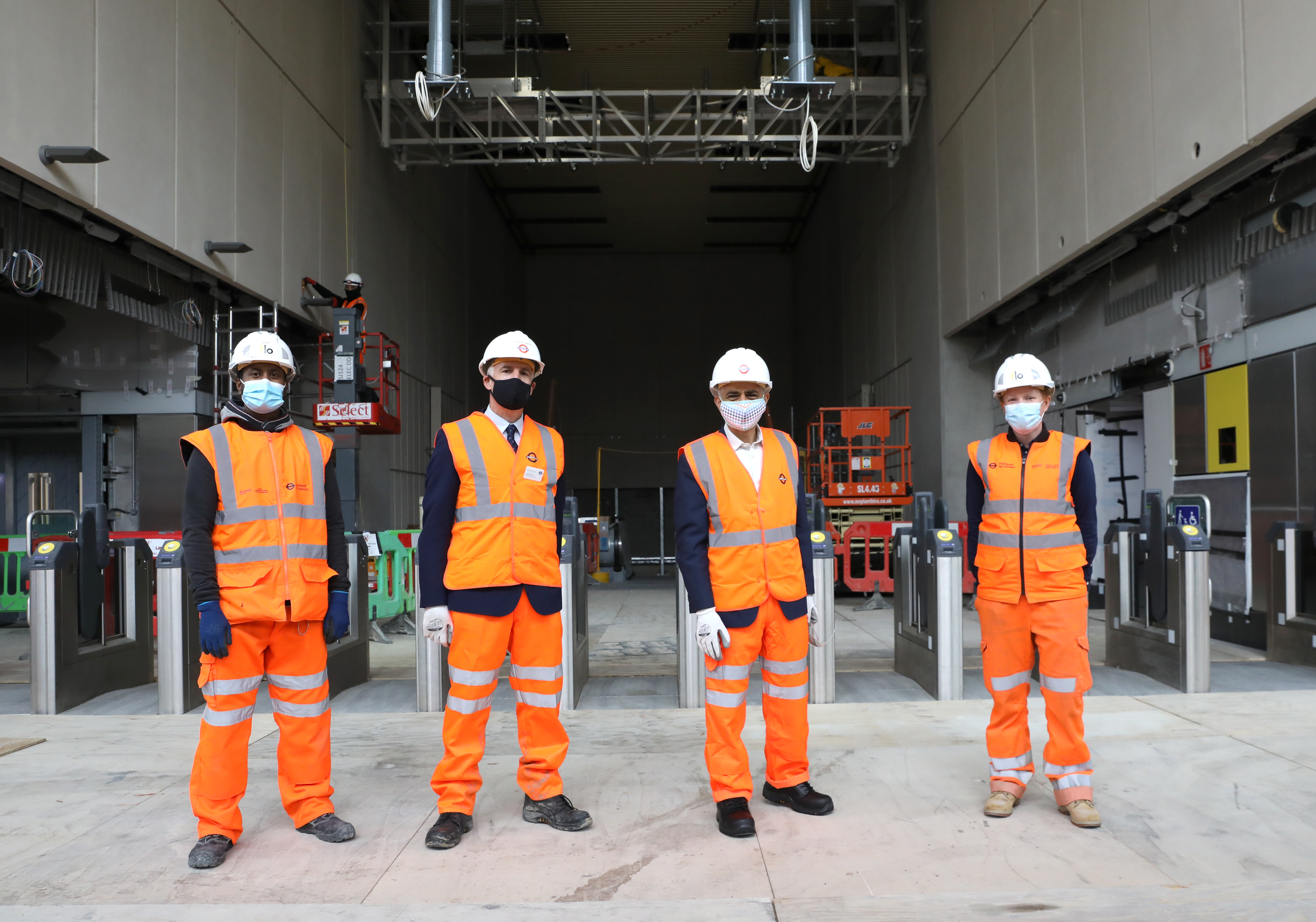 The Northern Line Extension project is on track for trial operations this summer, in time to support London’s recovery from the pandemic, with two new step-free stations expected to open in the autumn.

Mayor Sadiq Khan visited Nine Elms station recently to check out the progress of the project, which is the first major Tube extension to take place this century and will bring Battersea and the surrounding areas to within 15 minutes of the West End and the City.

Two new tunnels around 3km long have been built, and two step-free access stations have been created, Nine Elms and Battersea Power Station, which are both undergoing final fit-out.

All the essential services have been installed and traction power has been activated. Lifts, escalators and ticket machines are all in place, and final testing and commissioning are due to be completed in the coming weeks.

The Northern Line Extension is a key driver for regeneration and will support around 25,000 new jobs and more than 20,000 new homes. The project itself has also boosted the UK economy, supporting around 1,000 new jobs, including 79 apprenticeship positions.

TfL has been successfully running test Northern line trains through the extension since last December and expects to move into the trial operations phase this summer.

The Mayor said: ‘The extension will support tens of thousands of much-needed new homes and jobs, and make these parts of London a more attractive destination for people to work, live and visit. It’s a key example of how new transport projects drive regeneration and shows how central a reliable, joined-up network is for our city, both now and in the future.’

Stuart Harvey, TfL’s director of major projects, said: ‘The Northern Line Extension will bring vital sustainable transport links to thousands of residents and businesses in this swathe of south London for the very first time.

‘It has been a very challenging year for construction projects around the world but with extensive physical changes made to our construction sites we ensured they could reopen safely. Thanks to the commitment of brilliant teams at both Nine Elms and Battersea, we remain on target to welcome our first customers to these two new Northern line stations in the autumn.’

During the consultation, the vast majority of respondents supported the plans, with 87% agreeing it would benefit the area.

Ahead of the opening of the new Northern Line Extension, Kennington Tube station recently changed from a Zone 2 station to a Zone 1/2 station. As more Londoners return to the transport network, this will ensure passengers get the best value fare no matter which direction they are travelling in.

The fare zone change also means that customers travelling from Kennington Tube station towards Balham, Tooting and Morden will not have to pay any extra as a result of the extension.

To find out more about the project, including the latest updates, visit the TfL website.

Bus passengers in west and northwest London, and parts of Hertfordshire, are advised to check before they travel tomorrow as bus drivers working for Metroline have proposed industrial action. Strike action is also planned for Wednesday and June 7 and 9.

Passengers should consider other transport options, allow extra time for their journey and travel during our quieter times, which are between 8.15am and 4pm and after 5.30pm.

Where possible, customers are encouraged to walk or cycle to complete local journeys.

Bus services run by other operators, and other transport services, are expected to run as normal.

For more information and for help planning your journey, including downloading the TfL Go app, visit the TfL website.