The Woodland Trust says it expects virtually all native ash trees to succumb to a fatal tree disease.

It has been surveying its sites for ash dieback and has found it in numerous places.

It is estimated that it could claim 90% of the species – by far the most abundant – making up 60% of trees in our hedgerows.

The disease inhibits the uptake of water, weakening the tree and leaving it susceptible to secondary infections. 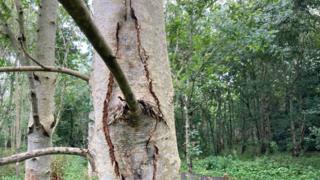 Indicators include major loss of leaf cover in the crown of the tree and diamond-shaped lesions on the bark.

Gregor Fulton, operations manager with the Woodland Trust in Northern Ireland, said once the disease takes full hold it will have a “huge effect on our landscape”.

“Ireland is a hedgerow nation,” he said.

At Monkstown Wood on the outskirts of Belfast one-in-five of the trees are ash.

At other sites managed by the trust, ash can make up as many as half all the trees.

The disease also presents practical problems for the trust, which encourages public access.

It will now have to monitor and make safe ash trees where they could pose a potential risk.

The same holds for agencies which look after roads, railways and housing.

It has been estimated the safety cost of dealing with ash dieback across the UK could be £15bn in the future.

The disease has been making its way across Europe for decades.

It is believed to have arrived in Northern Ireland in 2012 through imported saplings which were infected.

But Mr Fulton said people should not lose hope.

In Britain, where the disease has been established for longer, between 4% and 20% of ash trees have shown some resistance to the disease.

And where they have been lost, other species have regenerated the woodlands.

He said it was key for Northern Ireland to begin planting many more trees and increase woodland cover to well above its current level of 8%.