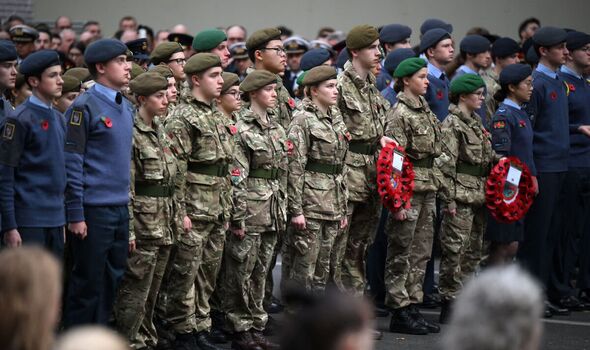 Analysis of Ministry of Defence figures showed more female service personnel left – 1,530 – than joined – 1,420. This is the first time this has happened since 2017 and it comes amid a series of sex scandals which have engulfed the military.

Labour said the number of service police investigations into sexual offences has rocketed by a third.

Defence chiefs were yesterday warned it could take 51 years to hit their target of 30 percent of personnel being women.

In October last year, the Royal Navy was forced to launch an investigation into allegations of rape threats and sexual assault on board Britain’s nuclear submarines, whilst two Red Arrows pilots were sacked after evidence emerged of a “toxic” culture.

Labour said the number of women leaving the Armed Forces is up from 1,360 in the year to September 2021.

Women, who account for 11 percent of service personnel, make up 81 percent of victims of military police investigations into sexual offences.

Around almost half (46 percent) hold the rank of private or other entry ranks.

Labour analysis of MoD data has revealed that six in ten sex offences tried through the military courts martial system failed to secure a conviction between 2019 and 2021.

A total of 324 charges for sex offences were brought before courts martial between 2019 and 2021. Just 141 convictions were secured.

The latest figures also revealed that the Service Justice System failed to secure a conviction in 8 in 10 rape cases, and 6 in 10 sexual assault cases.

Shadow Defence Secretary John Healey said: “These figures are an indictment of the Conservative’s treatment of women in our armed forces, and many are now voting with their feet.

“Week after week there is fresh evidence of the need for an overhaul in culture and standards, but Ministers continue to resist reform and allow problems to be swept under the rug.

“In government Labour would ensure serious offences are investigated and tried through civilian courts when committed in the UK, to provide the support and justice those who serve in our armed forces deserve.”

Tobias Ellwood, the Chairman of the Defence Select Committee, urged the Ministry of Defence to “prioritise fixing this”.

“Given the rise of deplorable stories of how some women have been treated, it’s not surprising to learn that more are leaving than joining,” Mr Ellwood said.

“Whilst the majority of women who serve enjoy their time in uniform and would recommend others to serve their country too, perception and reputation matters.”

A Ministry of Defence Spokesman said: “Following an increase in recruiting during the Covid pandemic, Armed Forces recruiting numbers have returned to pre-pandemic levels for all our personnel and are sufficient for Defence to meet its operational requirements.

“No form of unacceptable behaviour is tolerated in our Armed Forces, which is why we have introduced zero tolerance policies, implemented the Defence Serious Crime Unit to investigate serious crimes across our services that is independent of the chain of command, and have continued to improve reporting mechanisms.”