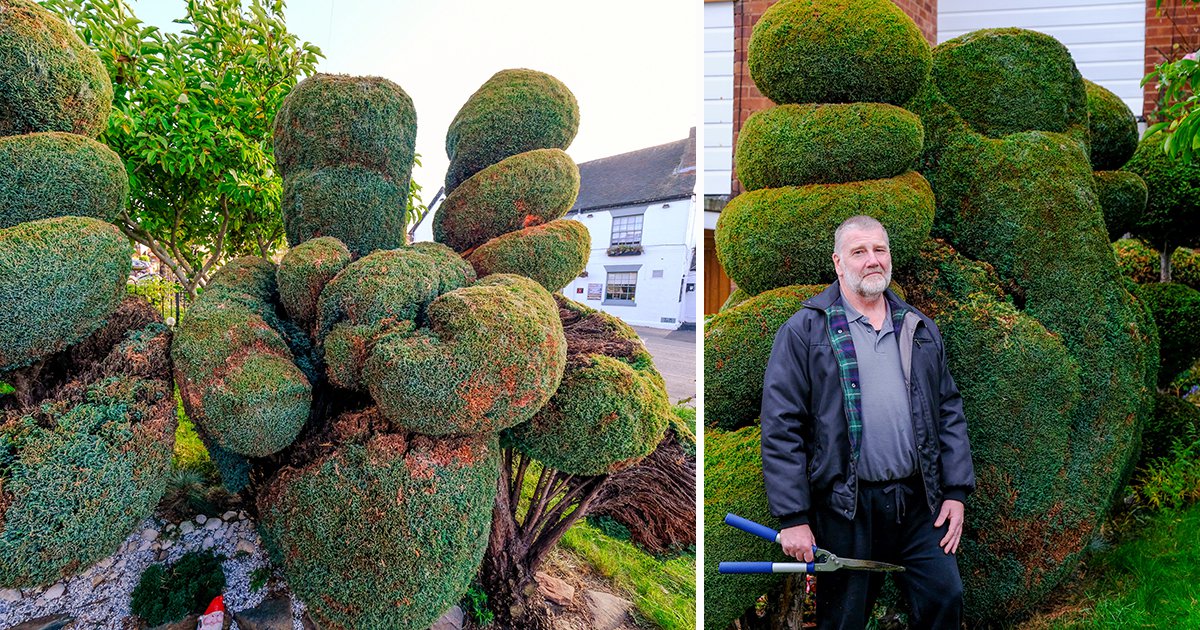 A gardener who has lovingly cultivated his ‘obscene’ bush for nearly 20 years has been left devastated after being told to cut it down.

Richard Jenkins, 63, has proudly flipped a green middle finger at passers-by in the front garden of his home in Warton, Warwickshire since the early 2000s.

The 10ft hedge was first pruned into the shape of the offensive gesture to get revenge on drinkers at the pub opposite who had teased him.

It’s since become something of a local landmark which attracts hundreds of visitors who take pictures for their TikTok and Instagram pages.

But Richard, who has two grown-up children and four grandchildren, has now been threatened with legal action after an unnamed neighbour complained.

He even had a visit from a police officer who suggested he should cut it into the shape of a fist or face a fine.

Richard has remained defiant and locals who love the hedge have even launched a ‘Save the Warton Bush’ campaign.

He said: ‘It all started years ago as a bit of a laugh with the locals in the nearby pub.

‘I used to do the hedges over there and they’d give me a bit of a tease when they came out.

‘One day I thought I’d get my own back so cut the hedge into a giant middle finger.

‘The pub locals thought it was hilarious and it just went from there. It became a permanent fixture in the village.

‘Everything was fine until I got a letter from the council saying someone had complained, saying the hedge was obscene.

‘I was told I’d have to cut it down or modify it so it didn’t look rude anymore. I refused so they got the police involved.

‘A policeman came out and said if they received any more complaints then I’d be instantly fined.

‘He even suggested I turn it into a fist but I told him no way.

‘I still didn’t do anything about the hedge apart from let it grow out a bit but there’s no way I’d chop it down. It was all for a laugh.’

Richard and his wife of 22 years, Linda, 69, live opposite The Office Pub in the village with the hedge pointing towards the entrance.

He added: ‘Many people quite like it, often you see you people stopping in their cars, getting out and having a picture with it.

‘One local lad even has it as his screensaver on his phone. I have had it up for nearly 20 years now, it is staying.’

Warwickshire Police confirmed an officer was sent to investigate although they had not received a direct complaint.