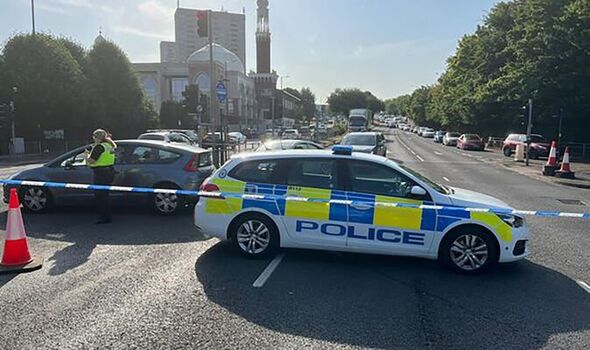 The man in his 20s was rushed to hospital but, despite the best efforts of medics, has died of his injuries. A Hyundai Ioniq smashed into railings on Belgrave Middleway in the city centre at around 10.40pm.

Emergency services found multiple patients at the scene and paramedics also took four other men, all occupants of the car, to hospital.

They remain at a different hospital with injuries not thought to be serious, Birmingham Live reports.

A spokesperson for West Midlands Police said: “We’re appealing for witnesses and information after a man has sadly died following a collision in Birmingham last night, July 17. A Hyundai Ioniq struck railings on Belgrave Middleway, near the underpass with Lee Bank Middleway, at around 10.40pm.

“The driver – a man in his 20s – was taken to hospital with serious injuries but he passed away this morning. Our thoughts are with his family and friends during this awful time.

“Four passengers in the vehicle suffered minor injuries. We’ve carried out enquiries at the scene and it’s not currently believed any other vehicle was involved.

“We’re keen to hear from anyone with information – and particular dash cam footage – to assist our investigation into the collision. Please contact us via Live Chat on our website west-midlands.police.uk or by calling 101. Quote log 3835 of 17 July.”

A West Midlands Ambulance Service spokeswoman said: “Crews arrived at the scene to find multiple patients involved in the collision, with one man having suffered life-threatening injuries.

“Staff worked quickly to administer advanced trauma care to the patient, before conveying him on blue lights and sirens to the Major Trauma Centre at Birmingham’s Queen Elizabeth Hospital. However, despite everyone’s best efforts, the man sadly passed away in hospital this morning.

“Four other patients involved in the incident were treated for injuries not believed to be serious and were conveyed to Sandwell Hospital for further treatment.”