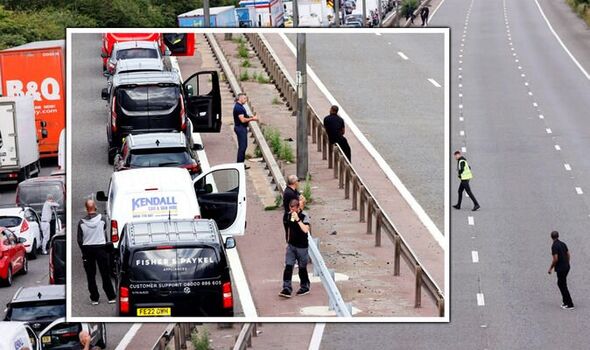 The Prince of Wales Bridge has been closed in both directions. Motorists have been warned by police to expect severe disruption as planned protests against soaring fuel prices take place. The protest got underway just after 7am with heavy traffic on the busy bridge within an hour. A traffic camera at Junction 23 Magor shows the full scale of the chaos, with several vehicles at a standstill.

Avon and Somerset Police advised motorists to plan ahead, with several key routes likely to be affected, including the M4 Severn Bridge between England and Wales in both directions, ahead of the morning rush-hour.

The force also warned a “slow-moving roadblock” is also planned on the M5 between Bridgwater and the Almondsbury Interchange from about 8.30am, which is likely to head east towards Bristol via the M4 and M32.

There is also the possibility of the same protest being carried out along the same route towards Somerset.

The protests are also expected to have a knock-on effect on various other roads.

Superintendent Paul Wigginton said: “Working alongside Gwent Police, we are engaging with the various organisers of these protests.

“People have a right to peaceful protest and liaison teams from both Gwent and Avon and Somerset have been working to understand campaigners’ plans so public safety is maintained and to reduce disruption to others.

“Nevertheless, drivers can expect journey times will likely be longer than normal, especially on motorways and main roads during the busiest times of the day.

“We advise motorists consider any alternative travel plans available and ensure they are suitably prepared in case they are delayed.”