London mayor candidates on their best ideas for London 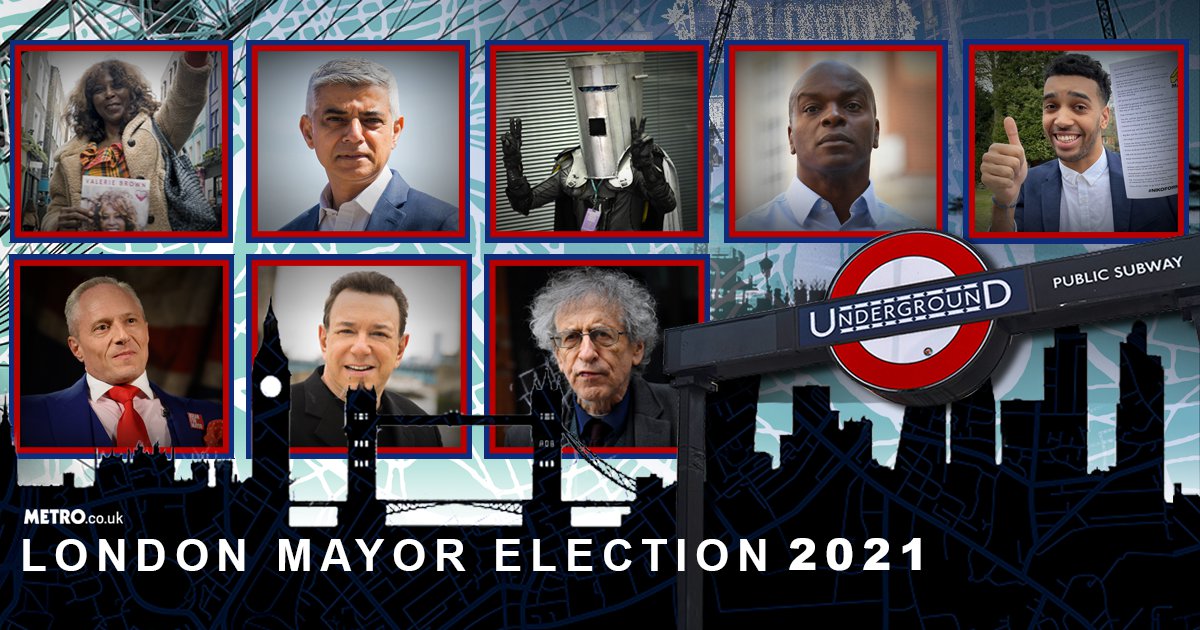 A record number of candidates are vying to win Thursday’s London Mayoral election on policy platforms ranging from the bizarre to the revolutionary.

As part of our ‘Ideas for London’ series, Metro.co.uk has interviewed six prominent candidates, focusing on eye-catching policies that each says would improve the capital.

In the final instalment of the series, we take a look at the remaining candidates and some of their policies – including Citizens Assemblies running London, giving Professor Chris Whitty a clicker, making gangs sign a ‘peace treaty’ and promoting veganism.

Previously, heavy favourite and current Mayor Sadiq Khan told Metro.co.uk about his plan for a ‘menopause policy’ which could see sufferers given time off. In a bid to reduce crime, Conservative Shaun Bailey’s backed opening 32 new youth zones, while Laurence Fox said he wanted to introduce ‘broken windows policing’.

The other 14 candidates – ranging from UKIP’s Dr Peter Gammons to a radical environmentalist grandmother, via YouTubers, a pastor and Count Binface – are listed alphabetically below.

The Renew Party candidate moved to London as a student and now describes himself as a ‘cross-cultural professional with experience in international law, cybersecurity, data and digital economy’.

He says he wants to ‘level up London for ordinary citizens’, and support local businesses and communities while protecting the environment.

Mr Balayev backs regulating Silicon Valley firms to ensure they pay a ‘fair share’ for Londoners’ personal information and would attempt to ensure residents are never more than 15 minutes away from essential services.

He also wants to incentivise green start-ups and give all Londoners a support payment through a ‘London Supplementary Income’ scheme.

The satirical candidate has caused quite the online stir in the latter stages of the campaign, after tying with Laurence Fox and UKIP’s Dr Gammons on 1% in a poll.

Binface – a veteran political campaigner who claims to be an alien, and morphed from Lord Buckethead in 2019 – launched an eccentric 21-point manifesto in March.

It includes a plan to rename London Bridge ‘Phoebe Waller’ (Bridge) and Hammersmith Bridge Wayne (Bridge), after the actor and former England footballer.

He would also prioritise moving a hand dryer at an Uxbridge pub ‘to a more sensible position’ and introduce a £1 price cap on croissants.

The radical environmentalist and grandmother says she has only one policy: ‘To give power to the people.’

A diverse cross section of society would be randomly picked like a jury, given ‘balanced viewpoints’ by a range of experts on various issues and then asked to make informed decisions. As mayor, Ms Brown says she would then merely implement their plans.

But her core issue is the climate crisis, which has seen her take a prominent role in various environmental protests. She describes the world as on a ‘road to hell’, with time running out, and backs revolutionary solutions, while also being happy to risk imprisonment for ‘our children’s survival’.

Ex-Labour leader Jeremy Corbyn’s older brother has become a controversial figure during the coronavirus crisis, owing to his backing for conspiracy theories and anti-vaccine views.

The former weather forecaster backs an ‘end all lockdowns’, blocking vaccine passports and spending more on ‘serious illnesses’.  He would convert the Nightingale hospitals into wards for cancer surveillance.

Mr Corbyn did not respond to Metro.co.uk’s request for comment.

YouTuber Mr Fosh says he is running to ‘beat Laurence Fox’ and admits he would be a ‘terrible’ mayor.

The former radio presenter wants to put his rival on the call back list for ‘every single acting job in London’ and change police sirens to Mr Fox’s song ‘The Distance’. He claims this would make people move out of the way 23% faster.

Away from his controversial rival, Mr Fosh backs giving Professor Chris Whitty a clicker so he does not have to say ‘next slide please’ anymore and wants London to have ‘fast’ and ‘slow’ walking lanes.

The UKIP candidate considers himself on the left of his party, which has taken an increasingly hard line on immigration in recent times, after losing votes to former leader Nigel Farage’s renamed Reform UK.

But Dr Gammons told Metro.co.uk that he is fighting for all ‘working class, ordinary’ Londoners, name checking university students and black cab drivers.

A self-described motivational speaker, broadcaster and author, he highlighted reopening roads shut to cars amid the coronavirus crisis as a key campaign issue.

Dr Gammons also says he would end the ‘corruption and cronyism’ he claims is on display at City Hall and prioritise housing and knife crime.

Mr Hewison says the mayor should try to limit Brexit’s negative impacts, via initiatives like working against deporting EU residents from London, ‘Erasmus style bursaries’ for students and a ‘Brexit Bureaucracy Busters office’ to help businesses overcome challenges linked to the UK’s departure.

A Londoner for 28 years, he originally arrived as an LGBTQ+ rights activist with the National Union of Students.

The chartered accountant has worked in finance for 25 years and is the openly gay biological father of 12 children, as part of the UK’s IVF programme.

The Animal Welfare Party’s leader of 11 years wants to make London a ‘world-leading city for people, animals and the environment’.

Ms Hudson would promote vegan diets across the capital, partly to help prevent future pandemics. She also backs improving the NHS and a number of green policies.

But her key campaign issue is speciesism – which rejects the idea that animals and humans should be treated differently.

She would like to see London stop selling foie gras and fur products, end the restaurant practice of boiling lobsters alive, and exhibiting captive animals in London’s zoos and aquariums.

The media producer and founder of Vegan Runners UK would also champion the phasing out of animal testing at London’s universities.

Recruitment worker and cricket coach Mr Kelleher wants to build 50,000 new council houses by 2024 – with priority going to people who were born and raised in the borough where they apply.

The former Brexit Party candidate backs increasing policing patrols with 100,000 more officers on the streets and a reduction in social media monitoring.

He would also introduce a ‘London Citizen Card’, giving residents the chance to buy digital ‘tokens’ linked to travel fares. It comes alongside the ‘Dad rocker’ and father-of-five’s plan to make public transport free for under-25s in the three years before their 25th birthday.

A former UKIP spokesperson for education, the Heritage Party leader has been a London Assembly Member since 2016.

The former Chemistry teacher, who taught in Botswana, Bosnia–Herzegovina, the USA and Bermuda, also wants to ‘celebrate British history and culture’.

The pro-Brexit politician, who has questioned vaccine safety, has also been a vocal opponent of lockdowns.

Independent Ms London changed her surname in February 2020 but insists she had ‘no intention’ to run for Mayor at the time.

In an effort to reduce knife crime, the former Conservative party member would make London’s gangs sign a ‘peace treaty’, pilot the legalisation of cannabis and open art, creative and sporting centres for young people.

Elsewhere, Ms London has pledged to put micro algae installations on buildings across the city to combat poor air quality in ‘days not years’ and provide 100 days of free public transport.

The CEO of The Peace Alliance and director of fin-tech company, he backs implementing ‘modern methods of construction to build better, faster and cost effective homes.’

Mr Obunge did not respond to Metro.co.uk’s request for comment.

The YouTuber known for prank videos surprised political observers when a recent poll put him in fifth place, albeit on just 5%.

The 23-year-old, who boasts more than 3.4 million YouTube subscribers, would champion banning VAR from the Premier League and reducing the price of Freddo’s back to 5p.

He claims that under his mayoralty, Boris Johnson would ‘be forced to shush’, and the River Thames would be frozen, so people can ice skate across while Hammersmith Bridge is being repaired.

The ‘supreme leader’ of the NDL (Niko Defense League) says he has spent ‘years actively campaigning against the EDL and far-right racism in this country’.

YouTuber Brian Rose has run an eye-catching campaign involving one of the biggest billboard adverts ever seen, quirky social media content and the re-emergence of a video of him drinking his own urine.

The American is promising to put an extra 10,000 police officers on London’s streets, abolish the congestion charge until 2022 and deliver 50,000 new homes by Christmas.

He also wants to organise an enormous August street festival and raise £100 million from businesses to fund after-school programmes for teenagers.

But the former banker is a controversial figure, owing to his London Real channel’s links to conspiracy theories, misinformation on Covid-19 and accusations of ‘scamming’ his followers, which he categorically denies.

Check out our story on how to vote in the London Mayoral election.