Saturday’s match against Burnley at the King Power stadium was the first home fixture since Vichai Srivaddhanaprabha was killed in a helicopter crash two weeks before. 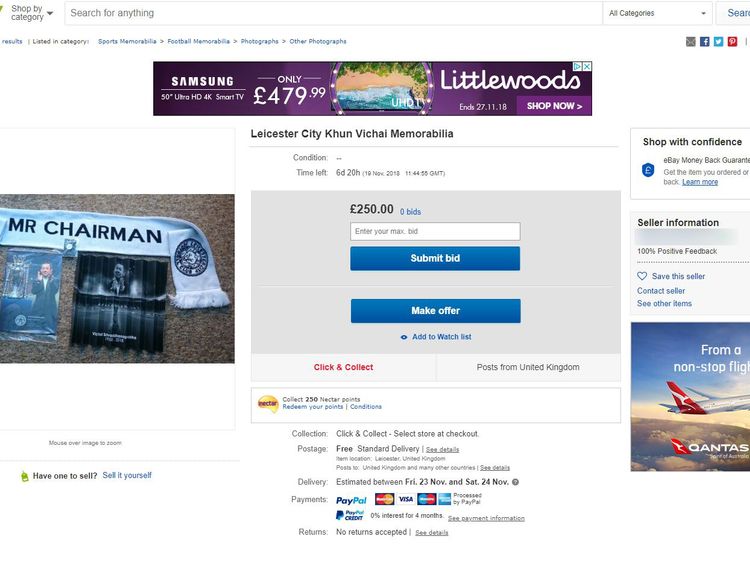 Bags containing scarves inscribed “Mr Chairman”, pin badges, programmes and clappers were left on more than 30,000 seats prior to kick off.

The commemorative programme, running to a hundred pages, includes tributes to the Thai billionaire from figures including former manager Claudio Ranieri, who led the Foxes to the Premier League title in 2015-16.

Less than 48 hours after Saturday’s 3pm kick off, the items were being offered on eBay for hundreds of pounds.

Leanne McCaffrey tweeted that such actions were “disgusting and disrespectful” and that those advertising the memorabilia were trying to “make money off tragedy”.

Michael J Topley said that anyone trying to sell the collection was “no fan”, adding that they should be “absolutely ashamed of yourselves trying to cash in”.

Before the game, which ended goalless, about 10,000 supporters walked from the city centre to the ground, led by injured player Harry Maguire, waving Leicester FC banners and Thai flags along the route in memory of Mr Srivaddhanaprabha.

Inside the stadium, Leicester fans and players bowed their heads in an emotional two-minute silence before kick off, and then during the 60th minute of the match, in tribute to their 60-year-old former chairman. Mr Srivaddhanaprabha’s son, Aiyawatt, was openly emotional as he walked around the pitch at the end of the game.

He wrote in the souvenir programme: “We will never be able to repay what (my father) did for us – for me as his son, us as his family, everyone connected to Leicester City and beyond – but we are committed to honouring his memory and upholding his legacy.

“I plan to commission a statue of my father, for outside King Power Stadium, as a permanent and fitting tribute to the man that made it all possible.

“He will forever be in our hearts. He will never be forgotten.”

Mr Srivaddhanaprabha was killed in the crash along with other four people; his employees Nursara Suknamai and Kaveporn Punpare, pilot Eric Swaffer and his partner, Izabela Roza Lechowicz, who was also a professional pilot.

Leicester City declined to comment on the sale of the memorabilia.