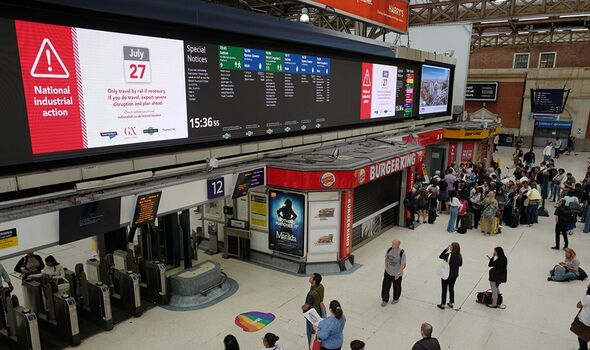 A rail passenger said they were “mugged off” by a homeless woman at a busy train station.

When the commuter didn’t have any change, the woman asked for a burrito, to which they agreed. It’s claimed the homeless woman then “demanded the most expensive option, barking orders for extra beans, rice, cheese, the lot,” which came to a total of £10.50 at an eatery at London Victoria station.

She then walked off with “her mother of all burritos” after “barely” muttering a thank you, My London reports.

Writing on forum Reddit, the rail commuter read: “I was in Victoria train station and a homeless lady goes up to me and asks for change, giving me the sob story about how she’s sleeping in her car tonight…

“I don’t know why but I felt bad and said although I don’t have change I’d be happy to buy her something to eat. She asks for a burrito, I said sure. Bad shout. (I promise I’m not actually dense I’ve just been travelling for four hours and I’m knackered). She then marches to the burrito stall and demands the most expensive option, barking orders for extra beans, rice, cheese, the lot. It came to £10.50. I was just planning on a few quid for a sandwich! She barely muttered a thank you and strode off with her mother of all burritos.

“FYI (for your information) I really don’t make much, I have definitely never spent that kind of money on myself just for a burrito, and £10.50 is quite a bit for me. I’m writing this on my train home feeling like an idiot wishing I’d just kept walking.

“I’m telling myself that it may have been the first decent meal she’d had in a while and that I did a good thing, although the way she was speaking to the workers it was clear she’d been there before…If anyone has any words of sympathy or a similar story , let me know lol.

“Also quick add on, this sounds ridiculous but she looked really similar to my best friend’s mum (just similar features) who’s the loveliest woman I know so I think that’s also why I let myself get mugged off.”

Web users shared their sympathy with them over the good deed while also revealing some of their own stories.

One person wrote: “S***** situation and nobody wants to feel mugged off but on the flip side £10 is cheap for a life lesson (some people are conned out of thousands). Chin up chap.”

Another said: “I fell for the ring scam when I was 15, but being a broke teenager I only had 5 euros on me. I consider it cheap for an important lesson and I keep the ring as a reminder.”

A third encouraged: “You acted charitably and were taken somewhat for a ride – if it’s any small consolation she’s at least well fed tonight!”

A fourth commented: “This isn’t about her; it’s about you. You did this because you are a decent human being. She is responsible for her own actions and you are responsible for yours.”