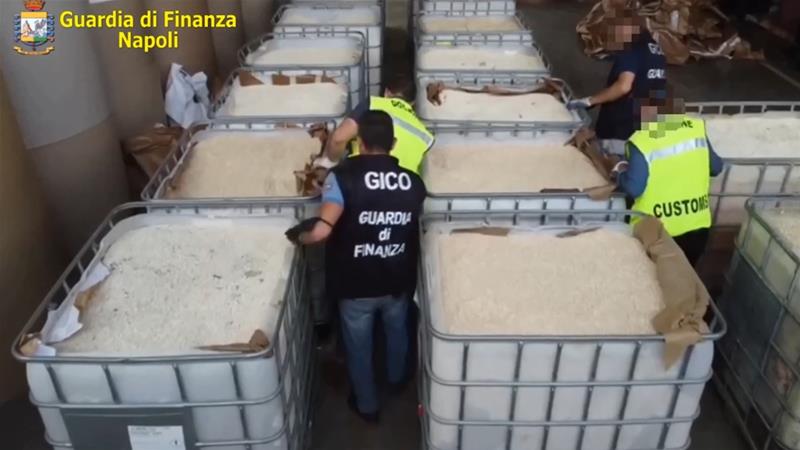 Italian police have seized 14 tonnes of amphetamine pills, allegedly produced in Syria by the Islamic State of Iraq and the Levant (ISIL or ISIS) group to fund “terrorist” activities and destined for Europe’s illegal drug market.

Investigators said they impounded three suspicious container ships on Wednesday that had docked in the southern Italian port of Salerno and found 84 million tablets of the drug Captagon inside machinery and large paper cylinders for industrial use they were carrying.

The drugs were worth about one billion euros ($1.12bn) and intended to be sold on the European market “to finance terrorism”, the finance police of Naples said in a statement.

“We know that the Islamic State finances its terrorist activities mainly by trafficking drugs made in Syria which in the past few years has become the world’s largest producer of amphetamines,” the statement said.

“This is the largest seizure of amphetamines in the world.”

Cutting open the paper rolls and metal gearwheels with chainsaws, police found them filled with tablets imprinted with two semi-circles, the symbol of Captagon.

Video taken by police showed pills spilling out of the rolls and wheels as they were forced open.

Police said they were investigating if Naples-based Camorra organised crime clans might have ordered the huge shipment for international sale.

Two weeks ago, a smaller shipment of the drug was seized in Salerno’s port in a shipment of clothing.

Captagon, a brand name, was originally used in the 1960s to treat narcolepsy and depression.

Captagon is one of several brand names for fenethylline hydrochloride, a drug compound belonging to a family of amphetamines that can inhibit fear and ward off tiredness.

Customs police in a statement noted that Captagon is reputed to be used by ISIL fighters to “inhibit fear and pain”.

The amount of drugs seized was sufficient to satisfy the entire European market, police said, without providing a timeframe.

Two weeks ago, also at the port of Salerno, police seized a container sent from Syria hiding 2,800 kilos (6,200 pounds) of hashish and over a million amphetamine pills bearing the same symbol as those intercepted on Wednesday.