BRUSSELS — Iran for the first time tied the British seizure of an Iranian oil tanker to the ailing nuclear deal on Sunday, calling it illegal and a violation of the agreement.

By making that link, Iran appeared to be trying to press the Europeans to make good on the promised financial benefits of the 2015 agreement known as the Joint Comprehensive Plan of Action, or J.C.P.O.A.

“Since Iran is entitled to export its oil according to the J.C.P.O.A., any impediment in the way of Iran’s export of oil is actually against the J.C.P.O.A.,” Iran’s deputy foreign minister, Abbas Araghchi, said after emergency talks in Vienna with other parties to the nuclear deal.

The United States withdrew from the nuclear deal last year but Iran and Europe are in talks to try to salvage it.

British forces impounded the Iranian tanker in early July near Gibraltar, accusing it of violating European Union sanctions on Syria, an act Britain said had nothing to do with the nuclear deal.

On July 19, Iranian commandos seized a British-flagged tanker in the Strait of Hormuz, the world’s most important waterway for oil shipments, arguing that it had committed violations but formally denying that it was a tit-for-tat response.

Since then, Iran has blown hot and cold over suggestions that both sides release the tankers and Tehran promises not to send the oil to Syria, in part because London insists that the decision on what to do with the Iranian tanker must go through the courts.

Iran also warned against the British idea of sending a European-led naval force to escort tankers in the Persian Gulf, where the United States has already increased its military presence. A government spokesman in Tehran, Ali Rabiei, said the proposal “carries a hostile message, is provocative and will increase tensions.”

At the same time on Sunday, President Hassan Rouhani of Iran congratulated the new British prime minister, Boris Johnson, and said that he hoped that Mr. Johnson’s “familiarity with the issues of the relations of Iran and England and your presence once in Tehran will be a considerable help in getting rid of existing obstacles in the growth and expansion of relations between us.” 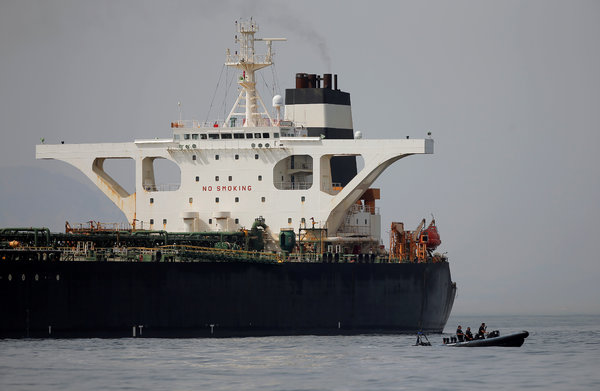 A British-Iranian dual national, Nazanin Zaghari-Ratcliffe, has been imprisoned in Iran since 2016. A deal that would free both the tanker and Ms. Zaghari-Ratcliffe would be a significant coup for Mr. Johnson, but he is also expected to come under pressure from President Trump to join the United States in abandoning the nuclear pact and increasing pressure on Iran.

Iran agreed to accept limits on its nuclear program in the 2015 accord in exchange for the lifting of international sanctions against it. After the United States withdrew from the deal last year, the Trump administration imposed even harsher sanctions this year aimed at shutting off Iran’s oil exports, its main source of income.

The new measures include secondary sanctions against third countries that do business with Iran. European countries have been trying to construct an alternative trading platform using barter to allow Iran to bypass the American-linked global financial system to avoid the new sanctions.

Those efforts have so far come to nothing, even though European officials have said for months that the system was nearly ready. Even then, only goods that would not be sanctioned, like food, medicine and medical products, would be traded.

To pressure the other signatories — Britain, France, Germany, Russia, China and the European Union — Iran has argued that under the terms of the agreement it is entitled to breach the pact’s restrictions since Iran is not getting the benefits it was promised for compliance. So far it has breached limits on uranium stockpiles and levels of enrichment, but not so drastically as to cause the other signatories to do more than admonish Iran to stick to the deal.

On Sunday, Iran threatened another breach — to begin activity again at the Arak heavy-water reactor. Ali Akbar Salehi of Iran’s Atomic Energy Organization told legislators of the plan on Sunday, according to state-run media.

He denied, as Iran regularly does, that Tehran has any intention of building a nuclear weapon.

At the same time, Iran’s escalatory tactics in the Gulf, and its seizure of tankers, have been partly counterproductive, hardly encouraging Britain or the other Europeans to go out of their way to defend the nuclear deal. The Europeans have consistently warned Tehran that it must stick to the deal as written if it expects the other signatories to do the same.

“It’s clear that the ongoing escalation, particularly in the Gulf, has been and is playing a big part of the reason why the deal in and of itself is in deeper and deeper trouble,” Nathalie Tocci, a senior adviser to the European Union foreign policy chief, told the BBC.

“Of course that escalation in the Gulf is taking place precisely because there has been a violation of the J.C.P.O.A. by the United States. But as the escalation continues it becomes increasingly difficult politically and therefore technically to summon the will to see this mechanism follow through with its first transactions.”

In Vienna, there were talks to try to de-escalate tensions.

All parties agreed to preserve the nuclear deal and “to continue to implement the J.C.P.O.A. in a balanced manner,” said Fu Cong, China’s representative at the talks. “All sides have expressed their strong opposition against the U.S. unilateral imposition of sanctions,” he said. At times during the talks there were some “tense moments,” Mr. Fu said.

Mr. Araghchi, the Iranian delegate, said that “I think the atmosphere was constructive and the discussions were good,” but added that “I cannot say that we resolved everything.” He said that preparation for another meeting at ministerial level was underway, but no date had been set. And he confirmed that the barter mechanism is “not functioning yet, but it is in its final stages.”