‘My pension is killing his future.’

When I go on climate protests, I often carry a photograph of my middle grandson when he was 24 hours old. I usually have this sort of slogan attached to it.

And I go to these protests because my wife, Pauline, and I have a rising concern about the safety of our three grandchildren and future generations.

As elderly people with time on our hands and some sense of responsibility for the current state of the world, we want to try and make a difference.

I became an environmental activist six years ago at the age of 70.

It was when I became aware – particularly through a friend of mine who set up a group called Grandparents for a Safe Earth – of the huge dangers of climate change.

I’d been interested in environmental issues for many years, but the idea that the damage seems irreversible dawned on me with some horror. 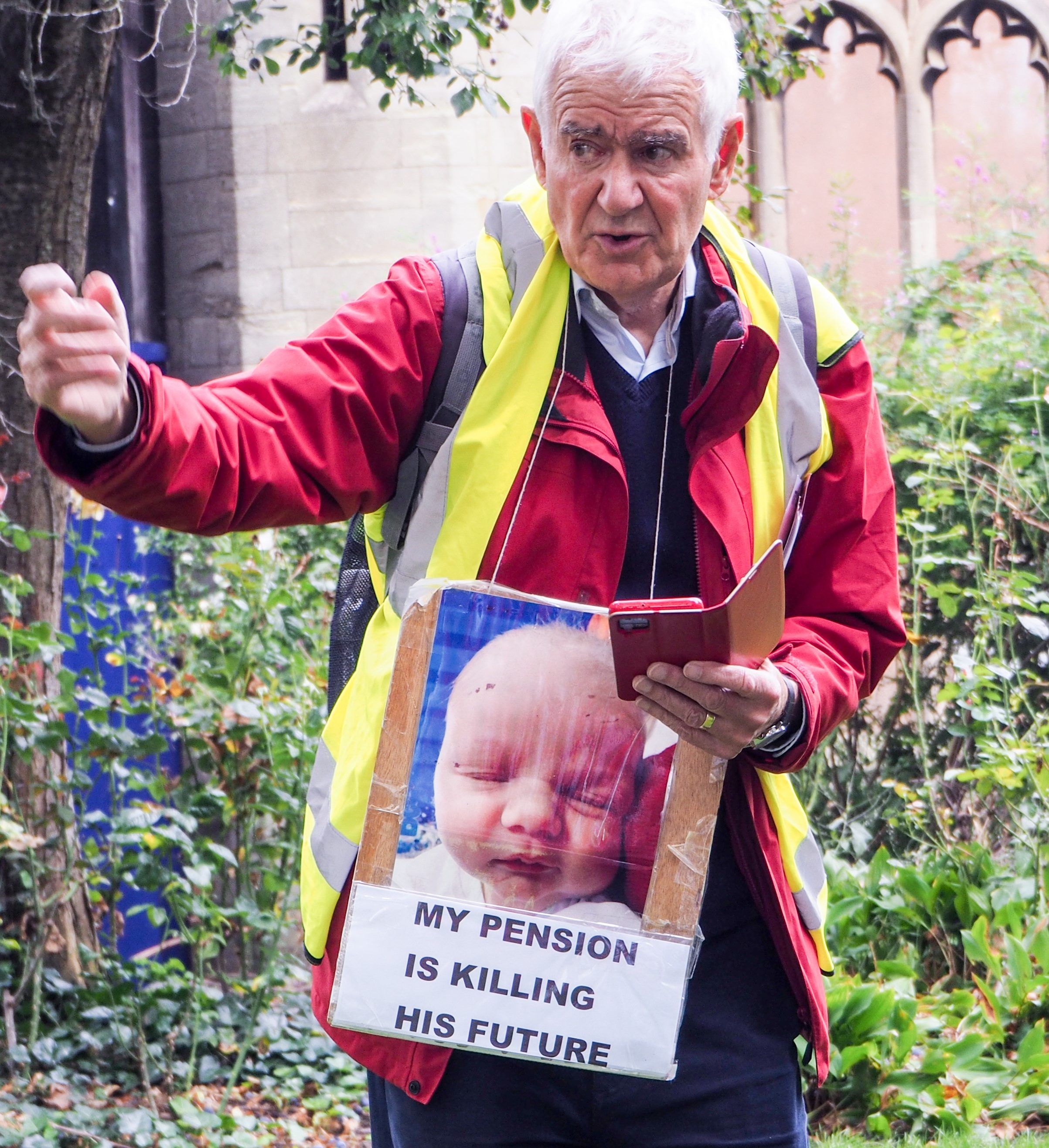 After that, I realised there was no time to waste, and got straight down to business.

As a retired therapist, I know that doing something that has a slightly humorous or absurd aspect to it is a way of getting through to people.

So we’ve held climate funerals, where we’re carrying an empty coffin through the streets dressed in mourning clothes.

We also had a die-in against the expansion of Bristol airport.

It wasn’t to stop holidaymakers getting to their planes, and it wasn’t particularly to make people feel guilty. We wished them a happy holiday, actually. It was about the continual expansion of air travel as one example of this madness we’re in.

One of our most colourful actions was at London’s Department for Business, Energy and Industrial Strategy (BEIS) in 2018.

Nine of us from Grandparents for a Safe Earth – which sadly no longer exists – hired some wheelchairs, and other environmentalists provided us with equipment to lock ourselves together, which I unloaded in a street parallel to Downing Street.

We tucked the equipment under the blankets of the people in wheelchairs, and wheeled our way down Victoria Street.

How we weren’t apprehended, I don’t know. We probably would be now. I think grandparents and elderly people had that image then. People thought they’re a bit past it, but we should have a bit of respect for them.

In the background, we had a network of young people who were savvy with social media, contacting news outlets. These were people we’d never met, but without whom it would have been impossible to do what we did.

I went in first and told the security guard I had a letter for the minister. Then in came the people in wheelchairs and some others. Within 60 seconds, they’d sat down in the waiting area and locked themselves together. I handed my letter over and went outside to speak to the media.

The building was closed down. Some members of staff whispered as they were going on their lunch break: ‘We’re on your side’. Others were quite angry at being inconvenienced. After six hours, we said goodbye to the security staff, thanked them for their tolerance and went home.

There are personal challenges protesting as an older person. Levels of physical energy are not what they were, and some of us have some mobility issues, which are important if you’re sitting or lying down for extended periods.

One may need help in getting up at the end! At BEIS, some protestors did the hokey cokey sitting down. It’s great for circulation and for keeping the spirits up.

They also had incontinence pads. Even as a young person you might need the loo at some point, and you can’t do that if you’re chained to someone else! And frankly, most of us have lived fairly quiet, conventional and law-abiding lives.

I’m now a member of Extinction Rebellion. But it’s not just about colourful actions. Everyone can do something. You can change your bank account, you can choose who you insure with and you can invest your pensions in different ways. These are powerful things anyone can do at the touch of a button.

And of course, I don’t have clean hands myself. I’m aware that my own consumption is part of the problem and it’s something I have to attempt to deal with; I just hope I’m doing some good now through my actions.

How hopeful am I about the future? I feel pretty sure that my grandchildren will be in very severe trouble by the time they reach my age – if that even happens – because of the destruction of the climate and world instability.

On the other hand, as Greta Thunberg said, hope lies in action.

I sometimes have a feeling that what we are doing is futile, but it’s still worth doing. That may seem totally mad.

But while I am alive, I have a duty – and a pleasure in that duty – at least in trying to act as if something can be done, and maybe it can.

Age is Just a Number

Welcome to Age is Just a Number, a Metro.co.uk series aiming to show that, when it comes to living your life, achieving your dreams, and being who you want to be, the date on your birth certificate means nothing.

Each week, prepare to meet amazing people doing stereotype-defying things, at all stages of life.

If you have a story to share, email [email protected]