The commentator said she “never tires” of seeing the Duke and Duchess of Sussex “winning” after Prince Harry won a bid to bring a High Court claim against the Home Office over his security arrangements while in the UK. Taking to Twitter, she said: “BREAKING: Prince Harry wins again – I’ll never tire of #MeghanAndHarry winning.”

Dr Mos-Shogbamimu is a self-confessed fan of Meghan and Harry and recently heaped praise on the Duke following his speech at the UN General Assembly in New York.

Her joy comes after Prince Harry was offered a boost in his row with the British Government over his security in the UK when a High Court judge said his case could proceed, granting permission for part of the duke’s claim to have a judicial review.

Harry lost the right to publicly funded protection when he stepped down as a senior royal and was told he could not privately pay armed police for the same levels of protection as the rest of the Royal Family during his visits to the UK. 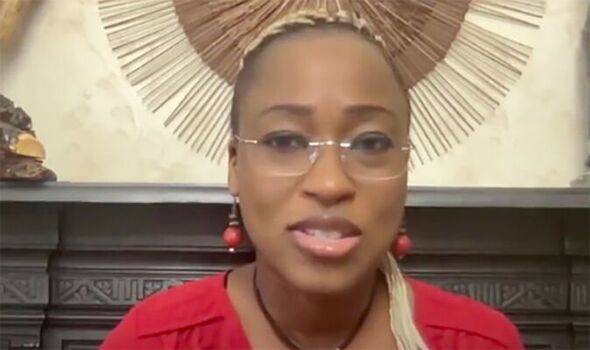 Since then, the couple have relied upon a private security team in the US but the couple’s legal representatives argue this team does not have adequate jurisdiction abroad or access to UK intelligence information which is needed to keep the Sussex family safe.

Harry has argued that he cannot ensure the protection of Meghan and their two children Archie Harrison and Lilibet Diana without the Met Police because of their access to UK intelligence.

He is now taking legal action over a decision not to allow him to pay for police protection for himself and his family when visiting from North America.

In the first stage of the case earlier this month, the Duke’s lawyers asked Mr Justice Swift to grant permission for a full hearing to have a judge review the Home Office’s decision.

The Duke’s challenge concerns the February 2020 decision of the Executive Committee for the Protection of Royalty and Public Figures (Ravec) over his security, after being told he would no longer be given the “same degree” of personal protective security when visiting.

Harry’s legal team argued that the security arrangements set out in a letter from Ravec, and their application when he visited the UK in June 2021, were invalid due to “procedural unfairness” because he was not given an opportunity to make “informed representations beforehand”.

Shaeed Fatima QC, for the duke, told the court earlier this month: “He didn’t know at that stage that the Royal Household was involved at all … he was told it was an independent decision.”

And in a public judgment on Friday, Mr Justice Swift said the duke had brought the claim for judicial review on five grounds, four of which were “arguable” and were granted permission, with some parts of the grounds removed.

This means there will be a full High Court hearing to review the Duke’s claim.

Harry was granted permission on the arguments including that Ravec’s decisions were legally unreasonable, and that the duke should have been told about Ravec’s policy before its decision in February 2020.

Discussing one part of Harry’s claim, Mr Justice Swift said it was “arguable” whether the Duke “should have had the opportunity to make representations direct to Ravec, including the opportunity to comment on other matters Ravec considered”.

However, the judge denied permission for other parts of Harry’s claim, including that he should have been told who the members of Ravec were and that he did not have the chance to discuss the “appropriateness” of some people being involved in the committee.

Mr Justice Swift said: “In the course of submissions, it became apparent that, while the claimant may have had disagreements with persons who were Ravec committee members, there was no evidence at all to support a claim that any committee member had approached decisions with a closed mind… Ultimately it was accepted for the claimant that no such case was, or could be, advanced.”

The Duke’s lawyers had also argued that Ravec’s policy was applied in an “overly rigid and inflexible manner”, but the judge said this part of the claim could also not go ahead.

Mr Justice Swift added: “As all who are familiar with judicial review claims will know, a conclusion at the permission stage that a case is arguable is some distance from a conclusion that that the case will succeed at final hearing.”