Brexit supporter and former Conservative Party leader Iain Duncan Smith hinted the Chancellor did not have long left in his current role. It comes after Philip Hammond criticised former foreign secretary Boris Johnson for pursuing a policy of leaving the European Union with or without a deal at the end of October if he becomes Tory leader. Speaking on BBC News, Mr Duncan Smith insisted the Chancellor has “sounded the message of doom” around Brexit since “day one”.

“I don’t agree with him, it’s not as Boris Johnson has said, what we want.

“What we want is an arrangement with them that allows us to get to the free trade deal.

“That is wholly able to put on the table and I think it’s achievable, but you won’t achieve it unless they are clear, whatever we leave on the 31. 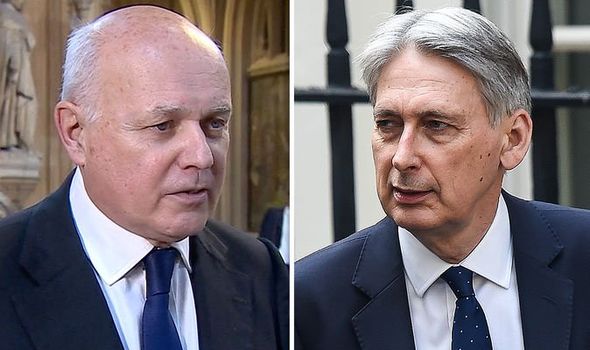 “Our priority is to get that deal, but if we can’t get that deal, there will be a whole myriad of other deals like landing rights and medicine stuff, all that is being sorted at the moment.

“But, you must have that determination to leave on the 31, and I don’t think it’ll be what the Chancellor says.”

He added: “I think we have a real opportunity to expand, but I would love to do it alongside Europe.”

After the launch of his leadership campaign on Wednesday, Mr Johnson was criticised by the Chancellor.

Speaking at Bloomberg’s Sooner Than You Think, Mr Hammond said: “The EU is not likely to be prepared to reopen the withdrawal agreement we have already opened with them.

“They will be very happy to talk to the new PM but they are not going to reopen the withdrawal agreement.”

During his speech, Mr Johnson vowed to deliver Brexit with or without a deal by the end of October.

He said: “Now is the time to unite this country and unite this society, and we cannot begin that task until we have delivered on the primary request of the people; the one big thing they have asked us to do. After three years and two missed deadlines, we must leave the EU on October 31.

“We simply will not get a result if we give the slightest hint that we want to go on kicking the can down the road with yet more delay. Delay means defeat. Delay means Corbyn. Kick the can and we kick the bucket.

On Thursday, the first ballot on the next Conservative Party leader will take place. Candidates will need to win five percent of the vote (a total of 17 MPs) to move on to the next round – if they don’t, they’ll be eliminated from the race.

‘Who are you listening to?’ Thornberry mocked for Labour’s ‘existential crisis’ on BBC QT