Home » Europe » How do you run a socially distanced nightclub?

How do you run a socially distanced nightclub?

It’s an industry based on close-up social interaction where people go to escape every day life.

Over the last few decades Scotland’s nightclubs have also nurtured music scenes often on the periphery of society – from underground dance and electronic to heavy metal.

Now, having shut up shop during the lockdown, owners of some of the nation’s most well-known venues say the future is difficult to imagine. 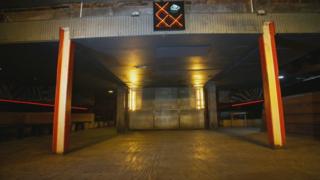 ‘It’s impossible – we need a vaccine’

Having opened in the late 80s, Sub Club on Glasgow’s Jamaica Street claims to be among the longest running underground dance clubs in the world.

Lauded as a “proper house venue”, the club installed one of the UK’s largest bodysonic dance floors in 2006 – a feature that allows clubbers feel the music pulsing below their feet.

The basement venue has no outdoor areas and a capacity of 410 people.

As a result, Mike Grieve – one of the owners of Sub Club – believes the only way the sector can get back in business is if a vaccine is found.

He said: “One of the concerns we have is there’s some attempt to force businesses like ours to reopen with limited capacity. It’s really not possible for us to open that way.

“People congregate very much on the dance floor, the very nature of the business is about close-up social interaction.

“Unless the disease fades away it’s very hard to see a future for clubs.”

Like many clubs in Scotland, The Tunnels in Aberdeen closed to the public with about three hours’ notice when lockdown was first announced.

Built into the city’s underground tunnels, the self-described “rave cave” regularly hosted DJs from around the world and has allowed the city’s dance and electronic scene to grow.

Owner Danny Galloway says the closure has meant the loss of a “huge social hub” for people in Aberdeen.

He is a little more optimistic about the possibility of clubs reopening – he says it is possible, but does not believe there will be much benefit for the customer or the business.

Danny said: “I think it’s going to be a challenge opening a venue like this with social distancing and really hard thing to police with two-metre separation on the dance floor or at a bar or in public toilets.

“We’re going to have to reduce capacity which is going to take the atmosphere of the place down a little.

“We’re going to have to employ more staff to police the two-metre guidance and financially it’s not really feasible.”

Hope for the future

Things may seem bleak in Scotland, but people in the business across the UK have far from given up hope.

In Manchester a fundraising project has launched to support the night time economy and local businesses through lockdown.

The live streaming service called United We Stream, set up on 3 April, has hosted the likes of poet Lemn Sissay and ex-Hacienda DJ Graeme Park, from Aberdeen.

The Scottish DJ’s sets have been viewed by millions online during lockdown.

Mike Grieve is concerned about the impact the nightclub hiatus will have on young people’s mental health – he says clubs are “vital to their sense of self and wellbeing”.

But he adds that dance is “built into the human existence”, and while the environment may look different in the future, “dancing will prevail”.

“There’s always the worry that people fall out of love with the idea of going out to a night club,” he said.

“People have always danced, it’s not a generational thing, it goes back to the dawn of time. So I think there’s always going to be people looking for a way to create a party.”