There was an unmistakable sense of conviction in Tom Moore’s voice as he addressed the camera after completing his walk.

“To all those people who are finding it difficult at the moment,” he said, addressing a British public who have seen life turned upside down by coronavirus. “The sun will shine on you again, and the clouds will go away.”

Moments before, the then 99-year-old war veteran had completed the 100th lap of a sponsored walk around his Bedfordshire garden. With service medals pinned to his breast pocket, and clutching his walking frame, he crossed the finish line at a slow but determined pace.

In just a few days, Mr Moore, nicknamed Captain Tom by his growing legion of fans, had risen from nowhere to the status of near national treasure.

When he had started fundraising for the walk, it had been with the modest aim of raising £1,000. Inspired by the dedicated work of medics, Captain Tom had wanted to thank the “magnificent” NHS staff who had helped him with cancer treatment and a broken hip. By the time he had reached the finish line, he had become a social media phenomenon and raised an astonishing £12m. By the teatime the same day, donations had risen to £15m. And the total keeps growing and growing and has now passed £30m.

Alongside the donations, Captain Tom had inspired the sort of intense fandom more commonly associated with Instagram influencers. Schoolchildren had been inspired to send cards for his 100th birthday. Artists had produced illustrations celebrating his achievements. 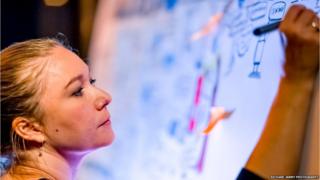 Rebecca Osborne is one of those who fell under Captain Tom’s spell. As the coronavirus headlines began to dominate, his fundraising gave her hope.

“We’ve been watching the figures go up, and instead of watching those figures go up I could watch the money go up for the NHS,” she says, referring to Captain Tom’s online fundraising page.

In normal times, Rebecca sketches at live events. But since the outbreak, she has turned her artistic talents to drawing cartoons of key workers, asking people to donate to the NHS when they share them online. She didn’t expect her sketch of Captain Tom, shown at the top of this page, to be liked more than thousands of times after it was shared from his Twitter account.

He inspired her because, despite being in a vulnerable category, she says, he has chosen to do “something that nobody else has done”.

“It’s setting a very good example to everybody that we can all do something.”

‘What Yorkshire is all about’

Fellow cartoonist Graeme Bandeira – whose office at the Yorkshire Post is about 20 miles from Captain Tom’s hometown, Keighley – says he personifies the endurance that the country needs to get through this epidemic. He chose to depict Tom Moore crossing a red finish line to emphasise his “phenomenal achievement”.

“He epitomises what Yorkshire folk are about: tough, gritty, stern exteriors. They sort of fight from within, you know? They’re very proud people.”

‘He saw the best and worst of humanity’

Born in 1920, Tom Moore trained as a civil engineer before enlisting in the Army for World War Two, rising to captain. He served in India and Burma. His military experience features prominently in the many messages of support he has received on social media.

There have been calls for him to be knighted, online and on the notice board of at least one London Tube station, thanks to the anonymous duo All On The Board. One member of the pair, who both work for London Underground, says most people have “huge admiration and respect for those who fought in the war”.

‪We should all be more like Captain Tom Moore. Thank you for doing what you do, raising so much money so far for our NHS Heroes and for inspiring a nation. You are a national treasure and a legend. @allontheboard ‬ . . ‪#CaptainTomMoore #SirTomMoore #WalkWithTom ‬#allontheboard

‪We should all be more like Captain Tom Moore. Thank you for doing what you do, raising so much money so far for our NHS Heroes and for inspiring a nation. You are a national treasure and a legend. @allontheboard ‬ . . ‪#CaptainTomMoore #SirTomMoore #WalkWithTom ‬#allontheboard

“Those who survived it have seen the best and worst of humanity. So when someone like Captain Tom does what he has done it will galvanise people and work wonders. Individually we all have our own invisible enemies to fight, in regards to health and mental health and we are having to fight this invisible enemy too. We all have to unite to fight it.”

‘It brought everyone together’

It is clear that Captain Tom’s appeal spans generations.

In mid-April, Only Fools and Horses star John Challis called for him to be made an honorary Army major – prompting a flood of support from fans of the 1980s sitcom. “100% agree,” one Twitter user commented. “He is a hero,” wrote another.

More than 150 miles from the Trotters’ Peckham stomping ground, in Port Talbot, south Wales, eight-year-old Reegan Davies set up her own campaign to thank Captain Tom. In a video posted on Twitter, she asked children around the country to send him a card for his 100th birthday on 30 April.

“I had never [seen] a 100-year-old before,” she says on the phone, explaining why she wrote her own card. He was a war hero. Now he’s my hero and he’s the nation’s hero.”

Her mum, Lisa Carter, says her daughter’s campaign is evidence of young people “giving back”.

“It finally shows the younger generation are looking up to the older generation,” she says. “There’s always been something negative in the media – that they don’t respect their elders, and things like that. I think it’s just brought everyone together.”

Kyle Dowling, from Sheffield, was inspired to draw his own cartoon of Captain Tom by the sense of patriotism he feels he has stirred.

“This hero has fought for our country and is now fighting again for our country by raising millions for our health service,” he says. “He’s a true gent and really does put the great into Great Britain.”

For Kyle, Captain Tom’s assurance that “the clouds will go away” is a great comfort during the lockdown.

“It’s helped me smile and think… it’s not forever. Tomorrow is just another step towards it being over.”