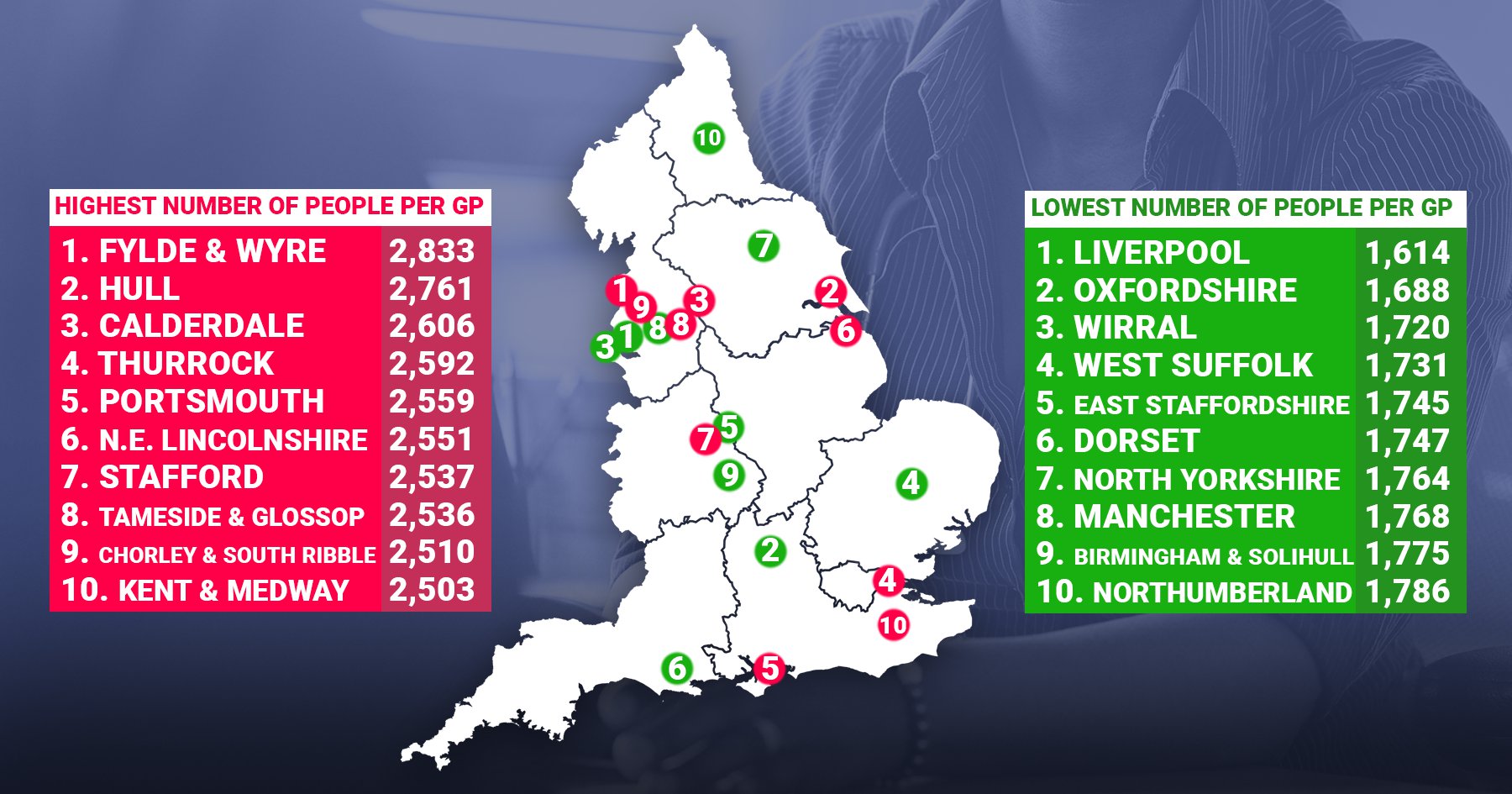 Some parts of England only have one GP for nearly 3,000 residents, new figures have revealed.

Worst-affected areas like Fylde, Hull, Thurrock and Portsmouth have almost twice the number of people per GP compared to better served places like Liverpool and Oxfordshire.

An analysis commissioned by the Liberal Democrats shows patients face a ‘postcode lottery’ in England, with their chances of being able to see their doctor partly dependent on where they live.

For England as a whole, there is on average one fully trained GP per 2,038 people, a 5% rise since 2015. The number of GPs has decreased by 1% in that time while the country’s population has gone up by 3.2%.

Some areas have seen an increase of around 40% in the number of people per GP over the same period, demonstrating the huge disparities across the country.

Fylde and Wyre in Lancashire is the worst affected part of England with one GP per 2,833 inhabitants, excluding trainee doctors.

The rest of the top five worst places are Hull, Calderdale, Thurrock and Portsmouth.

This compares to parts of the country which boast far more GPs to serve the local population.

Liverpool, just down the road from Fylde, has the best rate in the country with one GP per 1,614 people – nearly double that of its near-neighbour.

The rest of the top five areas with the highest number of GPs per head are dotted around the country – in Oxfordshire, the Wirral, West Suffolk and East Staffordshire.

Some parts of England have high numbers of trainees coming through, which should help address the situation to a certain extent in the next few years.

But questions are being asked over why the ratio has got so bad in many areas, even in places that haven’t seen rapid population growth.

The population of Hull for example has only grown by 0.2% in the time period, but its number of GPs per head has increased by 36%. This is mainly due to a quarter of the area’s GPs leaving the profession since 2015.

The Liberal Democrats have called on the Government to train more GPs in light of the research.

Health spokesperson Munira Wilson MP said: ‘These figures reveal a postcode lottery of care that is leaving people struggling to get GP appointments or waiting weeks to be seen.

‘But instead of fixing the GP shortage crisis, the Conservatives are making it worse by failing to train the new doctors we desperately need.’

She added: ‘Families rely on being able to see a GP when they or their children fall sick to get advice, access treatment and get well again. The Government must invest more in our GP practices and train up more doctors, to ensure patients get the fair deal they deserve.’

It comes after recent analysis from the British Medical Association showed there are over 1,800 fewer fully qualified GPs now than there were in 2015.

Reacting to the latest stats, Dr Richard Vautrey of the BMA said: ‘These figures clearly highlight the serious pressure that is being placed upon general practice at present, as the shortage of GPs alongside a large increase in demand means that many practices are struggling.

‘In many parts of the country it is very difficult to recruit and retain sufficient GPs, practice nurses and other staff.

‘This then adds further pressure on an already overburdened workforce, with the risk of burnout and some leaving the profession altogether.’

A Department of Health and Social Care spokesman said last year had been ‘record breaking’ in terms of the number of new doctors who started training as a GP.

He added: ‘We are grateful for the tireless efforts of GPs throughout the pandemic and have invested £270million to expand capacity. We are committed to increasing the number of training places available to 4,000 a year.’