Home » Europe » Greeks Approve Deal to Rename Macedonia, in Victory for the West

Greeks Approve Deal to Rename Macedonia, in Victory for the West

ATHENS — Overcoming Russian meddling in the Balkans and intensive domestic opposition, Greek lawmakers on Friday cast a wrenching vote to set aside historical antagonisms and recognize the newly renamed nation of North Macedonia, in a rare victory for the European Union and NATO.

The 153 to 146 vote by the Greek Parliament now essentially clears a path for Greece’s northern neighbor Macedonia, under its new name, to join NATO and potentially the European bloc, strengthening the West’s foothold in the Balkans over Moscow’s protests.

Greece had fiercely objected to its neighbor’s use of the name Macedonia, arguing that it appropriated Greek history going back to Alexander the Great and implied territorial ambitions over the northern Greek territory of the same name.

The issue has stirred months of mass demonstrations in Greece, and the decision to support the deal by Prime Minister Alexis Tsipras, who has sought to burnish his reputation as a statesman, may yet come back to haunt his government in elections this year. Polls show well over 50 percent of Greeks opposed to the new name, as well as the old one.

After the voting in Parliament began, legislators of the neo-fascist Golden Dawn party interrupted the roll call by shouting “traitors” at leftist lawmakers backing the deal. A small group of demonstrators protested in the rain outside the building.

But more broadly, the seemingly arcane fight over a place name became a test of geopolitical power pitting Europe and the United States against Russia in the perennially unstable Balkans.

The effort by Greece and its neighbor to come to an accommodation was groundbreaking, and it punctured the myth of a mighty Russian president, Vladimir V. Putin, hurling thunderbolts down on defenseless Western democracies.

While Mr. Putin may be able to meddle in the West, the outcome underscored that Russia still fails to present an alluring model to compete with the prosperity and democratic values offered by Europe, where Macedonia appears determined to make its future.

In Russia’s effort to sway the Greek vote, it allegedly paid protesters, tried to stoke nationalism on both sides of the border as well as influencing Greek Orthodox priests, and in a by-now familiar tactic, littered the internet with disinformation and propaganda.

But this time, Greek and American officials and observers say, the Russians appear to have overplayed their hand.

“I would call it an unforced error,” said Christopher R. Hill a former ambassador to Macedonia, who added that Russia upset the Greek government and pushed it closer to the United States and the European Union. For the West, Mr. Hill said, “It is a bright spot.” 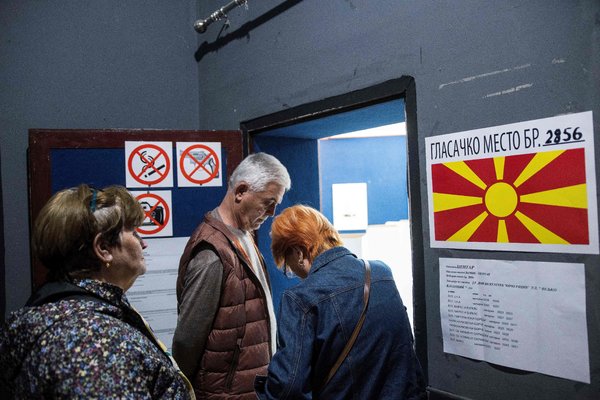 The standard-bearers of the West have celebrated the agreement by Mr. Tsipras, whom they saw not so long ago as the hard left and anti-American problem child of European politics.

In 2014, Mr. Tsipras demanded that Chancellor Angela Merkel “go back” to Germany, which had insisted on devastating austerity measures in Greece. This month, he welcomed her warmly as she admired how he “took the initiative” to resolve the name controversy.

“I am convinced that the solution will benefit Greece, North Macedonia, the stability in western Balkans and European Union,” she said.

Russia had hoped to prevent such an outcome, in no small part, analysts said, out of fears that its ally Serbia could next be lured by the West. The vote Friday essentially ratified an agreement struck in June last year between Mr. Tsipras and Prime Minister Zoran Zaev of Macedonia.

At the time, the Russian ambassador to the European Union, Vladimir A. Chizhov, warned that while the country would “not shoot nuclear bombs,” there were “errors that have consequences.”

Geoffrey R. Pyatt, the United States ambassador to Greece and a former American ambassador to Ukraine, acquainted with Russia’s playbook, alerted Washington that the Kremlin might be up to something.

That same month, American officials intercepted communications revealing that Ivan Savvidis, a Greek-Russian billionaire, soccer-team owner and former member of the Russian Duma with Mr. Putin’s United Russia party, was working with the Kremlin to undermine the deal by paying protesters.

They turned the intercepts over to the Tsipras government, which had previously refused to discipline Russia for the poisoning of a former spy and his daughter in Britain and which had argued against Western sanctions.

The evidence of Russian meddling quickly soured relations with the Greek government, which expelled two Russian nationals and barred the entry of two more.

Soon after, the Greek government pointed in a statement to the presence in Greece of the “Imperial Orthodox Palestine Society,” a Russian organization created to ‘‘de-Hellenize’’ patriarchates of the Eastern Orthodox church — rivals to the Moscow patriarch. Created by the Czars’ secret services in the 19th century, the group is now run by Sergei Stepashin, a former chief Russian spy and government minister.

In a September interview with Der Spiegel, he effectively called for the secession from Greece of the important religious site Mount Athos as ‘‘an independent monastic republic — something like the Vatican state in Rome.”

In response to the strong condemnations from Greece, top Russian officials canceled visits and Mr. Putin denied the allegations of meddling as “rubbish.”

On his way to Serbia this month, Mr. Putin told two Serbian newspapers that “the policy of the United States and certain Western countries aimed to foster their dominance in the region constitutes a major destabilizing factor.”

George Katrougalos, Greece’s deputy foreign minister, said in an interview Wednesday that in trying to prevent the Greek approval of the deal to recognize North Macedonia, Russia had “reacted in the same way that they have reacted with Montenegro.”

(In 2016, a report argued that Russian spies and soldiers worked clandestinely to topple the government of Montenegro, another Balkan country, after it joined NATO.)

He said he hoped these were “isolated” incidents and said he would give the Russians the benefit of the doubt, though just this month they seemed to call for a Greek referendum on the issue. “Even what they have said — that we need to hear the citizens of our state — is an interference in our internal affairs,” Mr. Katrougalos said.

By contrast, he seemed to downplay the involvement by the United States, though it brought plenty of pressure to bear, including a phone call in May from Vice President Mike Pence to Mr. Tsipras during a rough patch in negotiations.

“For the United States, seeing Skopje advance quickly toward NATO membership is a key aspect of our strategy to stabilize the region to deal with the problem of malign influence from Russia,” Mr. Pyatt, the American ambassador to Greece, told the Athens-Macedonian News Agency in November.

But for many Greeks, especially in the northern territories known as Macedonia, the issue of what to call Greece’s northern neighbor raised issues central to their identity.

Many Greeks considered the renamed state of North Macedonia a misnomer because Macedonia was to them a northern province of Greece and an ancient kingdom ruled by Philip II and Alexander the Great.

During the Greek Civil war of the late 1940s, Tito, the leader of Yugoslavia, had an ambition to extend the southern province of Macedonia down to the Aegean Sea, encompassing all of Greek Macedonia.

Opponents of naming deal said Tito had invented the nation of Macedonia out of a Yugoslav region populated by Bulgarians, and that for decades the country’s Slavic schoolchildren had learned that they were the inheritors of the ancient Macedonian history.

When the Republic of Macedonia, with a population of only 2 million, declared independence in 1991 during the disintegration of Yugoslavia, Greeks worried that it still harbored irredentist claims on a Macedonian minority in northern Greece.

Greece’s opposition effectively blocked Macedonia from joining NATO until it changed its name. The failure to join that club has in turn kept the European Union out of reach. And while most of the world came to recognize the state of Macedonia, Greece only agreed to call it the Former Yugoslav Republic of Macedonia, or Fyrom.

“For us in Greece this issue is one of the most sensitive matters for the country,” said Adonis Georgiadis, the Vice President of New Democracy, the rival party to Mr. Tsipras, and a staunch opponent to the deal. He stipulated that only the name “Fyrom” be uttered in his office. “If you ask me what I am, I’m a Macedonian, and I am Greek.”

Analysts said the anxiety about a loss of sovereignty was built on the resentment and impotence Greeks felt after years of Europe-imposed austerity.

Mr. Tsipras has made clear that the deal makes a definite geographic distinction between the northern Greek region called Macedonia and the new country called North Macedonia and that the neighbor “can claim no relation to the ancient Greek civilization of Macedonia.”

Late Thursday night in Parliament he said, “We are one step away from a very historic event after almost 30 years of inactivity.”

His supporters have argued that he did not want a weak and unstable state on his northern border divided among potential Bulgarian, Albanian and Macedonian factions.

But political observers here said he also saw the deal as a potential wedge issue to use against his opponents in the New Democracy party by pushing them to the nationalist right.

“The government saw an opportunity to kill two birds with one stone,” said Thanos Dokos, the director of the Hellenic Foundation for European and Foreign Policy.

Whether that strategy bears fruit remains to be seen, as many Greeks have seemingly been left aggrieved.

“They are not Macedonians, they are Slavs,” Michalis Patsikas, an organizer of the protests and self-described patriot, said on the eve of the vote as he sipped a coffee under the Acropolis.

He mocked the notion that the Russians had a hand in the protests, saying the funding came often from the Greek diaspora in the United States.