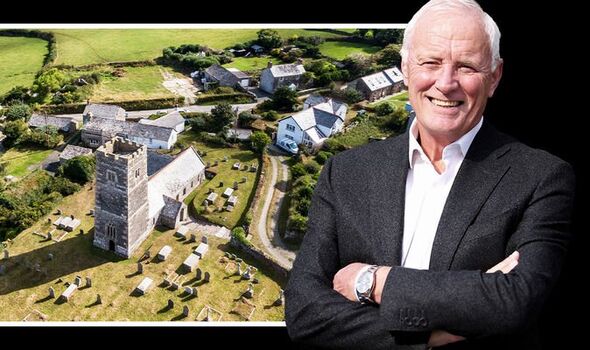 They claim the sports promoter has caused “significant anxiety” after stating he would have to increase some rents and transform their church into a venue for celebrity weddings, a move they branded “grotesque”.

Mr Hearn, 74, has visited the Cornwall beauty spot on several occasions ahead of making an offer – and he told campaigners on meeting them that they had “nothing to fear” from him with no one being forcibly evicted.

But campaign coordinator Serena Patrick said: “He did advise that some of us are “paying too little” and confirmed that rents may rise beyond what we can afford.

“Mr Hearn also spoke of holiday lets in some of Trevalga’s houses, celebrity weddings and knocking down our Manor House to build a £1,000-a-plate restaurant.

“He would not engage in any discussion about the history of Trevalga or its importance as a part of our shared heritage.” The group has postponed its Rally for Trevalga until it digests Mr Hearn’s plans.

Ms Patrick added: “There is concern about the future of the Manor House, the history of which Mr Hearn has made clear he sees no value in. But celebrity weddings are not in keeping with the spirit of Trevalga or our church.

“St Petroc is one of the patron saints of Cornwall and associated with humility. The idea of holding celebrity weddings in a church dedicated to him is grotesque. But change is coming to Trevalga, whether in the form of new trustees or a new owner, all we can do is try to navigate it in the best way we can.”

Trevalga Estate is home to just six let farms and 17 other homes – all of which from part of the sale. A legal battle is ongoing as locals claim it is in breach of the wishes of former owner Gerald Curgenven.

He left it in his will to Marlborough College in 1959 with the instruction to “preserve it” and not break it up. Campaigners’ main aim originally had been to have the charitable objectives on the register of the Charity Commission amended to reflect the intentions of Mr Curgenven – but the commission told them it was not able to intervene in the sale.

The village has been praised as one of the final coastal communities in Britain untouched by second homes. Ms Patrick claimed: “It is a medieval parish largely unchanged – a living piece of shared history.”

Mr Hearn has said previously he was treating it as a “generational” purchase for his family and pledged not to make “significant” changes.

He went on: “I am a busy person. I’d not be wasting my time down there if I was not a serious player. But it will be the best news for the residents if I do buy it. Anyone else looking to buy it would be looking at investment and development. I am not doing that. I like it.

“It is spectacular and this is not a money-making operation for me. I would be a godsend for the tenants. Not much has changed in a few hundred years – and we want to keep it special.”