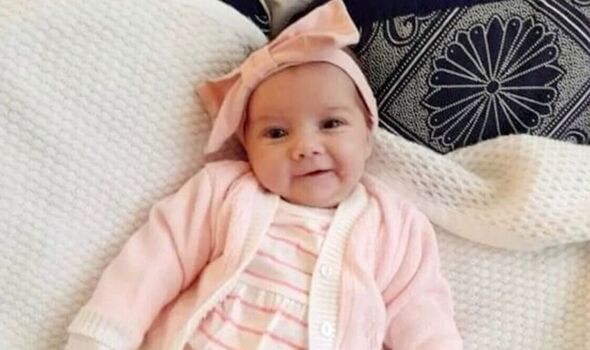 An inquest heard how Mia was found on the floor of the bedroom with the one-year-old dog standing next to her with a bloodied mouth. Mia’s family described how their “hearts are broken forever” after their daughter was viciously dragged from her Moses basket and killed.

The inquest was heard at Cork Coroner’s Court as Mia’s parents Ella Wood and Rhys O’Connell talked about their beloved daughter.

The couple from Waterford, Ireland, got engaged on New Year’s Eve 2020 and Mia was born in February 2021 which left the couple “ecstatic”.

The tragic incident occurred on June 6, 2021 at the house in Saint Mochua’s Terrace in Clashmore.

Ella’s sister, Emily and her son Jayden, 6, were visiting the house on the evening of the incident which saw Mia put to bed as she struggled with teething.

Emily checked on her niece and she saw ‘Red’ the rescue dog standing over the baby who was lying on the floor.

She said: “I could see Mia on the ground in the middle of the room, between the bed and the Moses basket.

“The dog was just standing behind he as he had already done it. There was blood all over the dog’s mouth.”

She continued: “My first reaction was to scream out for Ella. I picked Mia up straight away.

“There was a pink and white muslin cloth on the single bed that I grabbed straight away and put it to the back of her head to stop the bleeding.

“Mia was wearing a vest and a Babygro when I found her. I can’t remember seeing any tears of rips on her clothes. I just remember the blood on her head and on the floor.

“When we brough Mia down to Noreen (her grandmother), Noreen started putting pressure on Mia’s head and giving her CPR.

“We kept ringing and ringing 999 and telling them to hurry up as the child was bleeding from the head.”

Paramedics arrived at the property just after 1am and Mia was taken to hospital by ambulance and received further CPR.

She was pronounced dead at Cork University Hospital just after 3.30am.

Ella told the Gardai of hearing her sister’s scream when she found Mia.

She said: “I have never heard her scream like that before. I went flying up the stairs. When I got upstairs, I could see Emily on the landing. Emily was holding my baby, my Mia in her arms.

“I could see blood down one side of Mia’s face, on the back of her head and on her clothes.

“Emily said ‘it was the dog, it was the dog’. I could see the dog’s face was covered in blood. Noreen started doing CPR. Mia was still bleeding. I was in shock. I froze.”

Ella spoke of her initial doubts of the dog, saying that she did not like Red “from the beginning”.

She continued: “There was just something about it.”

“I love dogs and animals, but I did not like this dog from the beginning. It wasn’t allowed inside but if a door was open it would try to come in and someone would shoo it out.

“I always felt uncomfortable with the dog and the baby in the house.”

Noreen was also heard at the inquest and told of how Ella and her son Rhys lived with her and her husband.

She told the court that she and her husband rehomed Red but that she “hated the dog” and had “big concerns” about him after he tried to snap at Mia when she arrived home from the hospital.

Noreen told of how her husband insisted that they keep the dog but that it would be kept outside and slept in a kennel on the side of the house.

Pathologist Dr Margot Bolster reassured the family that Mia “wouldn’t have felt anything” after Mr O’Connell asked if the baby would have felt pain.

She concluded that Mia died from a traumatic brain injury with haemorrhage and shock from scalp lacerations consistent with an animal attack.