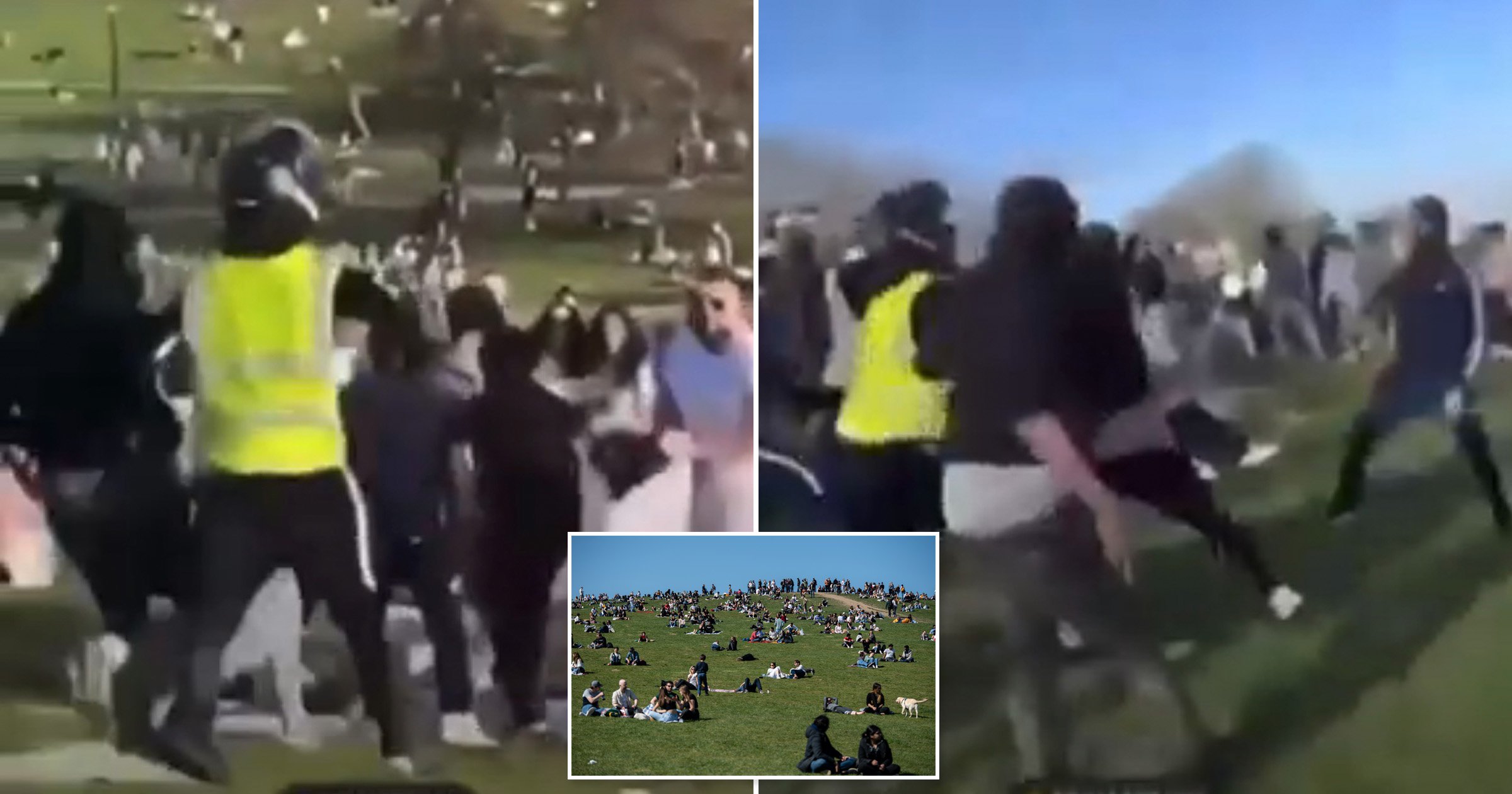 Primrose Hill will be closed off overnight for the first time in decades after it became a hotbed of anti-social behaviour post-lockdown.

The north London park, near Camden Town, has attracted huge crowds recently with a minority getting drunk, brawling and urinating over the beauty spot.

Famous for its views of the London skyline, the green space is the only Royal Park not already locked at night and has been open 24 hours a day for the last 50 years.

It’s popular with a wide-section of society, including many celebrities who live nearby, such as Taylor Swift, Dominic Cooper and Lily James.

The move is being seen as a ‘circuit break’ before a permanent solution is found and involves metal fences blocking the entrances after 10pm on Friday, Saturday and Sunday.

Labour leader Keir Starmer, who is the area’s MP, has weighed in, slamming the ‘selfish minority’ for ruining the park for the rest of the community.

He said: ‘Primrose Hill is a fantastic green space, boasting one of the best views of the London skyline and we are very lucky to have it in Camden.

‘Many people have enjoyed meeting up with friends and family there as lockdown has eased.

‘However, serious anti-social behaviour from a selfish minority is taking a terrible toll on the surrounding community.’

Mr Starmer took part in a video call with residents recently in which the majority wanted the park locked, and agreed with the temporary gates closure.

But local resident Amy McKeown has started a petition against the gates, which has gained more than 1,100 signatories.

She said: ‘We want to tackle the current problems without resorting to constructing gates.

‘We want positive encouragement of behaviour change rather than all losing the freedom to enjoy the hill day or night.

‘The suggestion of erecting gates and permanent closure of the park is disproportionate and unnecessary.’

Green spaces across the country have been over-run with revellers post-lockdown, particularly in the period where some socialising was allowed again but pubs were not yet open.

Videos filmed recently in Primrose Hill showed a shirtless man being beaten with a crutch and gangs scrapping with knives.

It’s a far-cry from the image of the park as seen in films including the Bridget Jones series, Paddington and Tinker Tailor Soldier Spy.

A spokesperson said: ‘We are continuing to work closely with the police in their duty of enforcing the law.

‘As a temporary measure to support them in breaking the current pattern of anti-social behaviour at Primrose Hill, we are trialling the installation of fencing at the park gates over the next few weekends, after the police have cleared the park.

‘This weekend the park will be closed from 10pm on Friday, Saturday and Sunday. We will keep the situation under review.”

Inspector Paul Clarke, from Camden Police, said he understood that some people would be upset by this decision.

But, due to police resources being stretched, officers alone were unable to tackle the issues.

He said: ‘This has been a long running issue for local residents that needed a wider solution than just policing due to competing and more serious demands for our attendance that can come from across Camden and Islington.

‘The police have put a considerable amount of resources into trying to deal with the issues on Primrose Hill and these were unsustainable in the medium to long term due to the reopening of the night time economy as a result of the easing of Covid restrictions.’