Fears baby missing with aristocrat and rapist ‘sleeping in tent’ 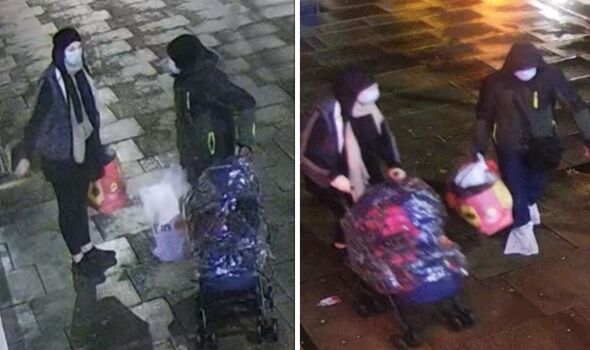 The Metropolitan Police are urgently appealing to the public to help them find a newborn baby who they believe has been sleeping in a tent in freezing temperatures. A team of officers are “working around the clock” to track down Constance Marten, her baby and partner Mark Gordon, who have a substantial amount of cash allowing them to live off-grid. They have established they went into Argos on Whitechapel Road, E1, at 6.19pm on January 7 to buy camping gear.

Gordon entered the store alone and bought two big bags full of items, paying in cash, including a blue two-man tent, two sleeping bags and two pillows. He left the store at 6.40pm.

The couple are then believed to have spent more than three hours walking around the Whitechapel Road area, where they tried to unsuccessfully flag down three black cabs.

They then left the area on foot and were last seen making their way down Brick Lane, towards Bethnal Green Road at 10pm. Gordon is often seen walking alone ahead of Constance and the baby. That was the last official sighting of the family.

Gordon had spent 20 years in prison in the US after being convicted in Florida of kidnapping and sexual battery, according to US law enforcement records. He was deported from the country after his release.

Detective Superintendent Lewis Basford, who is leading the investigation, said: “We are extremely concerned that a newborn baby – less than a week old at the time on January 7 – has been exposed to sub-freezing cold temperatures if Mark and Constance have been camping out somewhere as our evidence suggests.”

“No child, especially a tiny, newborn baby, should be forced to endure such dangerous, potentially life-threatening, conditions.

“This is why it is absolutely vital that anyone with information about their whereabouts contacts us as a matter of urgency – whether it is with a recent or older sighting. Every piece of information is crucial to enabling us to find the baby and ensure it is okay.

“My officers will continue working tirelessly behind the scenes to piece together the family’s movements and current whereabouts. It could be that they are trying to blend in with homeless communities, either here in London or further afield, or they could be camping in more rural or wooded areas.

“They could be absolutely anywhere in the country. Please keep your eyes peeled, especially while you are out and about in waste ground or beauty spots, or while you’re walking the dog, and report any information, no matter how insignificant you think it is, to us.”

On January 5 at 6.33pm, police were called to a car that was on fire on the hard-shoulder of the M61, near junction four (Farnworth, Bolton), but the occupants were not at the scene.

Officers believe believed most of their belongings were destroyed in the car fire.

Marten and Gordon were quickly identified as the occupants of the car and that she had very recently given birth, possibly one or two days before, but had not been assessed by medical professionals.

Greater Manchester Police launched a missing persons investigation and established the family had left the vehicle and the motorway safely. They are believed to have walked to the Anchor Lane bridge that connects the Highfield and Little Hulton areas.

It is then thought they travelled to Liverpool and then onwards to Harwich via a taxi at about 3.30am on January 6.

At 9am the following day, the two adults and a baby were seen by a member of the public in Harwich. Officers had also received several confirmed sightings of the family in Colchester on January 6 and 7. As a result, Essex Police took over the investigation on January 9.

The force carried out a host of enquiries and reviewed several hours of CCTV before then being able to place the couple near East Ham Station in London between 10.30am and 12.30pm on January 7. This was the last confirmed sighting of the family, so the investigation was handed over to the Met on January 12.

Detectives are now confident they travelled by taxi from East Ham before being dropped off in Whitechapel Road at 6.14pm.

They were last seen leaving the taxi with an orange carrier bag and a pram. CCTV shows both adults have their heads and faces covered, while Gordon is wearing white plastic bags on his shoes.

Anyone who has information on the family’s whereabouts should call the incident room on 020 7175 0785.

Alternatively, information can be reported 100 per cent anonymously to the independent charity Crimestoppers on 0800 555 111. They never ask for personal details and they do not trace your device.