Brussels sources have revealed that EU leaders are keen to limit the impact of a hard Brexit on the bloc and working on a long Article 50 extension with a number of so-called “guillotine clauses” involved. The plans, cooked up by senior aides, will aim to give Britain and Brussels “time apart to figure out how best to proceed” to ensure the withdrawal agreement is supported by MPs in London. Theresa May or another British prime minister would be given the opportunity to immediately kill the extension once the Brexit deal is ratified in Parliament.

But similarly EU leaders will be handed the right to end the delay if Britain refuses to take part in the upcoming European Parliament elections in May.

An EU diplomat familiar with the talks said: “EU leaders want to avoid an uncontrolled no deal and there is no appetite to come back every three weeks to agree another delay, only to be blamed when the UK eventually stumbles out without a deal.

“This will give the UK and EU time apart to figure out how best to proceed and we’ll hear from the UK where they want to take this at another time, unless you fail to organise European elections and then it ends there and then.” 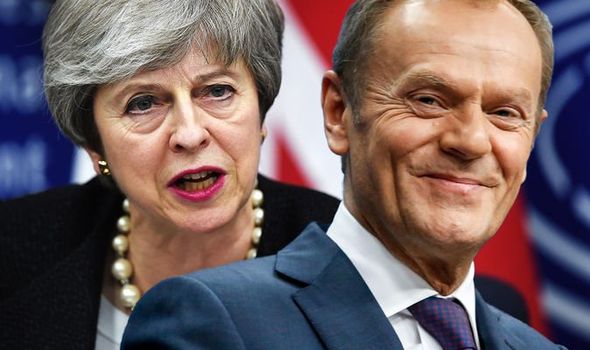 The Brussels strategy is likely to cause friction amongst EU leaders when they convene for emergency talks next Wednesday.

French President Emmanuel Macron is concerned that Britain’s prolonged influence in the EU’s decision-making process will prevent him for pushing reforms.

Previously discarded texts from March’s European Council summit could be revived and worked up as a “demand for good faith” from Britain.

But diplomats and officials are unsure whether the plan will be entirely enforceable while Britain are in the process of leaving the bloc.

EU ambassadors will meet in Brussels on Tuesday night to finalise plans ahead of the emergency European Council summit a day later.

Mrs May today requested to delay Brexit until June 30 in a letter to European Council President Donald Tusk.

She wrote: “The United Kingdom proposes that this period should end on June 30, 2019. If the parties are able to ratify before this date, The Government promises that the period should be terminated early.

“The Government will want to agree a timetable for ratification that allows the United Kingdom to withdraw from the European Union before May 23, 2019 and therefore cancel the European Parliament elections, but will continue to make responsible preparations to hold the elections should this not prove possible.”

Earlier this week Michel Barnier, the EU’s chief negotiator, and Jean-Claude Juncker, the European Commission President, warned Britain would not be able to reopen the withdrawal agreement during any long extension.

Attorney General Geoffrey Cox has also warned that Britain is heading for a long Brexit delay, which will likely be “longer than just a few weeks or months”.

Speaking on the BBC’s Political Thinking podcast, Mr Cox insisted failure to reach a compromise with Jeremy Corbyn’s Labour Party would lead to the delay.

Mr Cox said: “The problem, then, would be that we would be in an extension.

“It’s likely to be a long one, by which I mean longer than just a few weeks or months.”

He added: “We will no doubt be offered an extension with a date on it and the Prime Minister will be required to accept or reject it.”

A backbench bill championed by Labour’s Yvette Cooper and Tory rebel Oliver Letwin will force the Prime Minister to seek an extension if she is yet to agree her Brexit deal with the Commons by April 12.