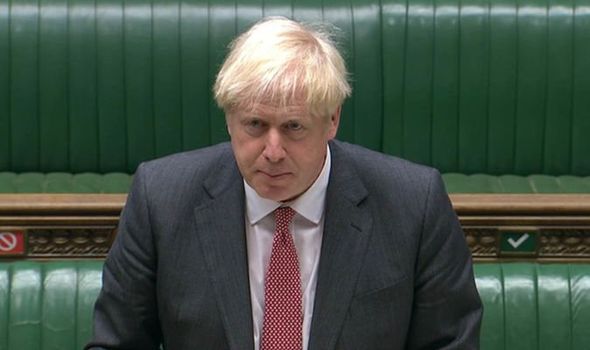 He said that the bloc wanted to use measures contained within the Withdrawal Agreement to use as leverage against the UK. Mr Johnson said that the EU was effectively threatening to “blockade” the movement of goods “within our own country”. “Absurd and self-defeating as that action would be, even as we debate this matter, the EU has not taken that particular revolver off the table and I hope that they will do so and we can reach a Canada-style free trade agreement as well,” he told MPs.

The PM made the comments in the House of Commons as he sought to quash a Tory rebellion over his plans to alter parts of the Withdrawal Agreement.

Britain and the EU are now in the closing weeks of negotiations for a post-Brexit trade deal before the transition period ends on December 31.

It will be one of several multi-billion-pound trading partnerships the UK is hoping to have around the world.

In a statement, she told the Commons: “The UK-Japan comprehensive economic partnership agreement is a major moment in our national history.

“It shows that economic powerhouses like Japan want ambitious deals with the UK and it shows the UK can succeed as an independent trading nation.

“It shows that we can strike deals that go faster and further than the EU.”

Ms Truss said that it was a “key stepping stone” in the UK joining a Trans-Pacific free trade group which will allow the UK to tap into £110billion of trade opportunities.

She said that talks with the USA on a bumper trans-atlantic trade deal were “very positive”.