Home » Europe » Essex lorry deaths: Migrant tells court he was smuggled into UK just days before 39 others died in a trailer

Essex lorry deaths: Migrant tells court he was smuggled into UK just days before 39 others died in a trailer

An illegal Vietnamese immigrant has told a jury how he was smuggled into the UK in a lorry 10 days before 39 others were found suffocated in the back of a similar trailer in Essex.

The man, who the judge has allowed to remain anonymous in court because of his “anxiety”, said his parents paid smugglers up to £40,000 so he could get to Britain and apply for Home Office papers.

The man, in broken English, told the court he flew with a friend to Poland, where he studied for six months, and later travelled to France where a contact arranged for him to wait in a field with others before they were helped into a lorry trailer and driven, via a ferry, to England.

He said his family paid for a “VIP” smuggling service in which the lorry driver knew he was carrying illegal immigrants. He said in an alternative service the driver would not know there were people hidden on board.

Jurors were told the man, known as Witness X, had posted a video shot in Paris on 10 October last year before beginning his illegal journey to the UK.

Vietnamese friends showed him how to contact a woman called Hieu via Facebook and she put him in touch with a man called Phong, who set up the trip for him via a UK telephone number.

He said he was given a postcode and told to go there, an hour from Paris, near a lake, where he was met and taken to an apartment where there were other Vietnamese waiting to make the same journey to the UK.

Taxis collected them and drove them for 90 minutes to a place near a factory, where they were told to hide in a nearby field, though there was really nowhere to hide, he said. There were already two European men waiting there and there were 15 of them altogether – men, women and children.

He told jurors: “An Englishman in a truck came to the place. It drove up. The driver opened the doors at the back of the lorry and brought all the people to the truck. He helped me in. He said ‘quickly, quickly’ and ‘keep quiet’.”

He described the Englishman as tall and slightly fat and he didn’t understand everything he said. 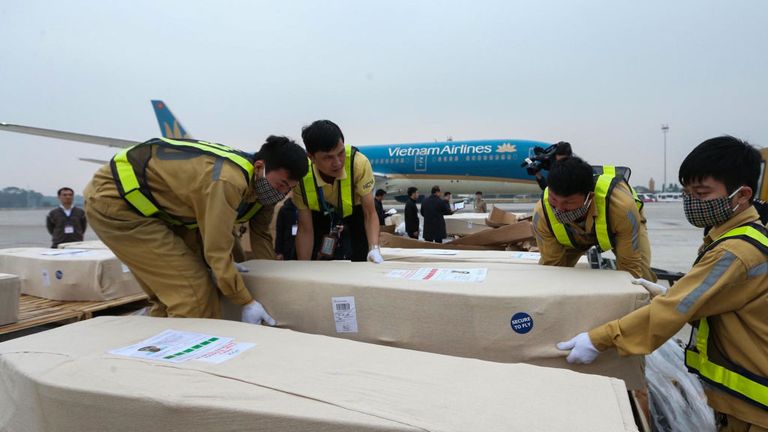 Witness X said the trailer was empty, dark inside and the door handle could be operated only from the outside. During a stop they were given water and told there were plastic bags to use if they wanted to go to the toilet.

He then described sensing the trailer they were in being lifted, a boat journey of seven or eight hours, then being lifted again. He and others had switched on their mobile phones and knew they had arrived in England.

They were helped out of the lorry and driven again in three black cars for about an hour. The contact Phong met them at a flat, where the witness stayed until he had arranged for his parents to pay into a Vietnamese bank account £13,000 – part of the total payment.

Prosecutor Jonathan Polnay asked the witness how he was going to stay in the UK. He replied: “I was going to go to the Home Office and apply for my papers.”

“Did they tell you what to say?” asked the prosecutor. “Yes,” said the witness. “I don’t want to say.”

Under cross-examination, Witness X said he had wanted to come to England for a better life for him and his children. He could get papers in the UK, but could not in other European countries.

The group of 39 Vietnamese men, women and children were found dead in Grays on 23 October last year after being smuggled into the UK from Zeebrugge in Belgium.

Eamonn Harrison, 23, a lorry driver from Northern Ireland who drove the trailer to the Zeebrugge ferry port, denies 39 manslaughter charges. He also denies a charge of conspiracy to assist unlawful immigration.

Christopher Kennedy, 23, from Northern Ireland, denies conspiracy to assist in lawful immigration. He wasn’t there on the night.