The boxer, nicknamed Del Boy, is back in the ring tonight as he aims to secure a victory against Ukrainian Oleksandr Usyk, with the winner likely to face British champion Anthony Joshua. The outspoken fighter, who is renowned for his out-of-ring antics, is hoping to secure his career comeback after appearing to fall down the heavyweight ranks in recent years. Much like his boxing, Chisora isn’t scared to weigh in on debate and in a passionate defence of Brexit.

The 36-year-old took aim at those in the capital for the lengthy negotiations to secure the nation’s escape from the bloc.

He is an ardent Brexiteer, and moved to the UK from his native Zimbabwe back in 2000, as a 16-year-old.

And during a chat with Mr Farage, he explained exactly who was to blame for the UK’s long, drawn out process of leaving the EU – despite the country voting to leave more than four years ago. 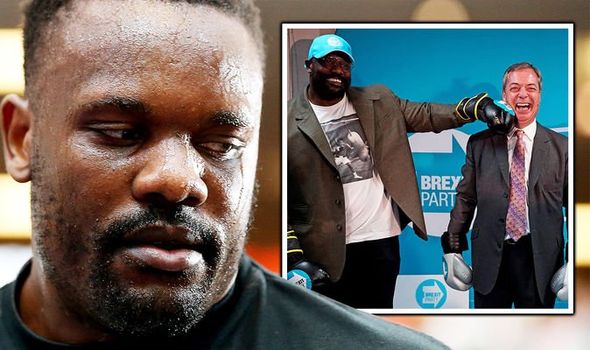 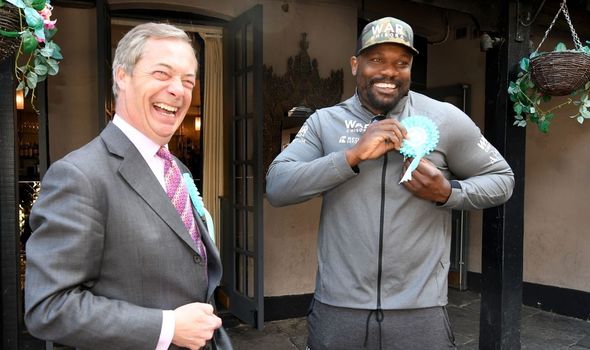 The Brexit Party would enjoy a stunning night, claiming the most MEP seats in the UK, ahead of the Conservatives and Labour.

The ex-Ukip leader said: “Now we met originally through a mutual friend who said to me this Chisora bloke, he’s pretty eurosceptic.

“So we met and we talked and you are a pretty committed believer in us leaving the European Union. What’s the main thrust of that for you?”

Chisora responded: “I think you know, the people voted and when people vote it should be done. The public voted and you know the only people who are making it so difficult is the Londoners. 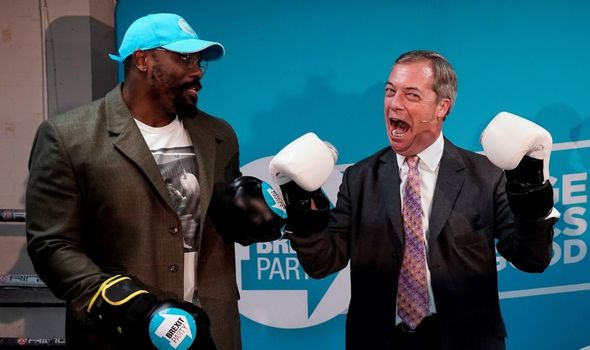 “But when I travelled to the outskirts, like you know Manchester or Birmingham, places like that, the same things need to be changed.

“I just think I voted to Leave, and I think the whole country voted to leave, but we’re still holding on to the same thing, three-and-a-half years have gone which I don’t think is fair.

“Now people will not believe in voting, because if you vote what are we voting for?”

Ahead of the Brexit Party’s stunning election night, Mr Farage and Chisora both took to the ring to spar, as the leader launched his European election campaign. 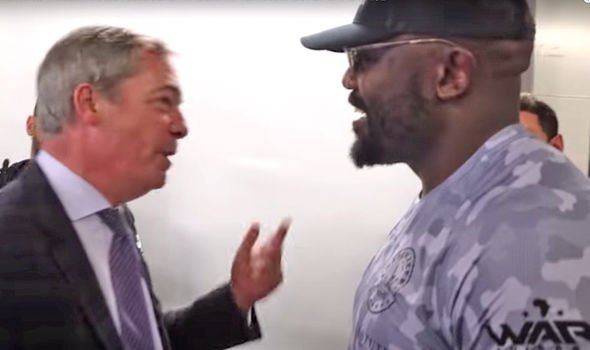 Unearthed footage showed Chisora hugging Mr Farage before he asked him whether he’s been to a boxing match before.

Mr Farage replied: “I’ve been to boxing matches before but not for years, it was quite something in there. You were in there from the boom, boom, boom – you weren’t hanging about in there.”

Chisora said: “Mate I wasn’t hanging about, I didn’t want to waste no time.

“They’re saying they’re wasting time on Brexit, but like that, I just want to get it done.”

The boxer then mimicked his boxing stance, before unleashing a couple of jabs and welcoming Mr Farage into his dressing room as part of his entourage.