More than 66 million coronavirus vaccines have been handed out across the UK since the start of the rollout. Three-quarters of all adults have received at least one vaccine, while over half are now fully vaccinated. The South West of England is currently leading the way for vaccinations, while London is lagging behind.

The UK is expected to lift all Covid restrictions on June 21, which would allow large groups to mix, unsocially-distanced, for the first time in months.

But, concern has been raised over the B.1.617.2 Delta variant, which was first identified in India.

The variant is believed to be more transmissible than previous mutations, but the vaccine is still largely effective against it.

Health Secretary Matt Hancock said: “Shortly after vaccinating three-quarters of adults with a first dose, I’m thrilled that we have now vaccinated over half of adults with the life-saving second dose. 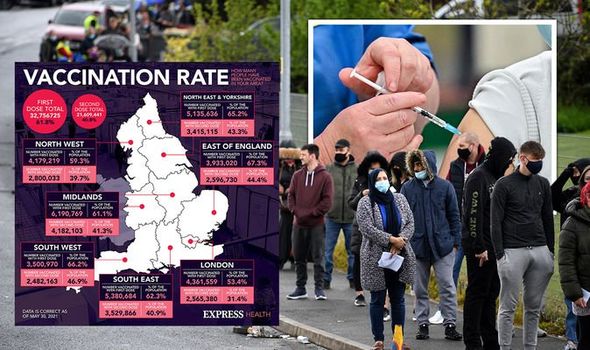 “We know how important the second dose is to give protection, particularly against the Delta variant.

“That’s why we’ve brought forward appointments from 12 to eight weeks for the most vulnerable people.

“I encourage everyone who is eligible to join the millions who have the fullest possible protection from this virus. Let’s roll up our sleeves and put this pandemic behind us, once and for all.”

Despite rising infection rates across the UK, the number of new Covid deaths appears to be remaining stable – largely thanks to the vaccination rollout.

Where has the highest vaccination rate in England?

The South West of England has the highest vaccination rate in the country, as of May 30, according to the latest figures from Public Health England (PHE).

Almost 2.5m people living in the South West had received both jabs, which is the equivalent to 46.9 percent of the population.

That’s the highest proportion of fully vaccinated adults anywhere in England, with the East of England coming in second (44.4 percent).

London had by far the lowest vaccination rate in the country with 31.4 percent – 8.3 percent lower than the second-lowest region, the North West. 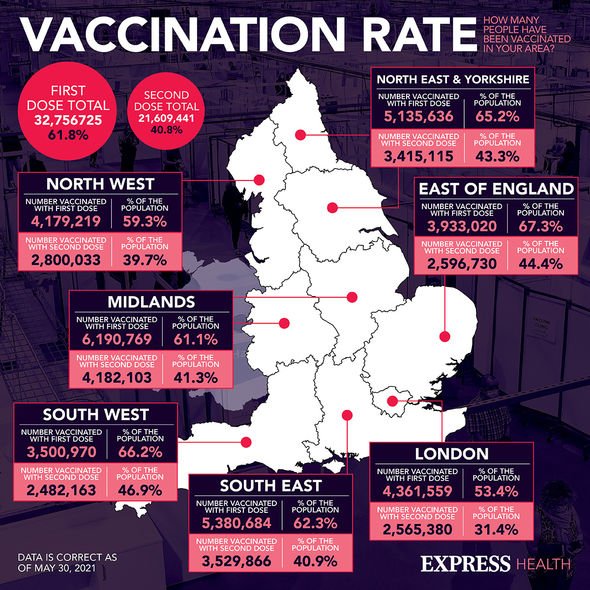 Looking specifically at local regions in England, Shropshire and Telford and Wrekin has the highest vaccination rate of first doses among the over-80s.

Almost 100 percent of those older than 80 years old have been given at least one dose of the Covid vaccine.

But, incredibly, 100 percent of all 75 to 79-year-olds in England have now been vaccinated.

There are a few areas that still need to vaccinate some 75 to 79s – including the Black Country and West Birmingham – but PHE has rounded up the figure to 100 percent. 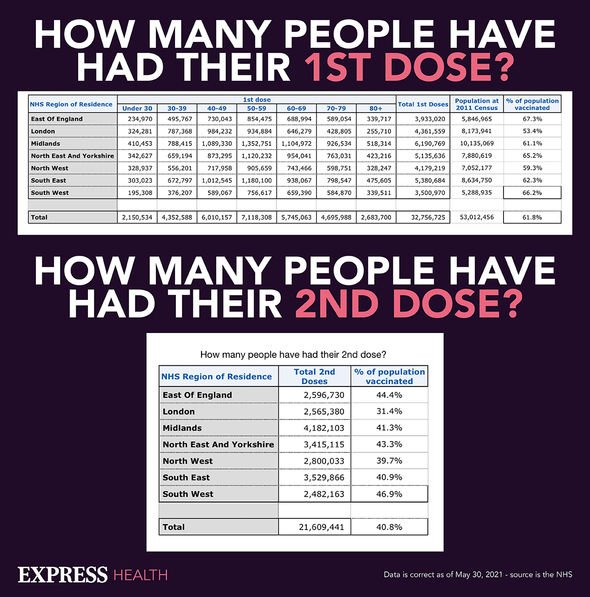 Anybody over 30 years old is currently eligible to book a Covid vaccine.

Most parts of the country have now vaccinated over 50 percent of people aged between 30 and 34.

Derbyshire has the highest proportion of 30-34-year-olds receiving at least one dose of the vaccine, at 61.6 percent.

However, just 33.4 percent of 30-34-year-olds have been given a jab in Bath, North East Somerset, Swindon and Wiltshire – the lowest proportion in the country. 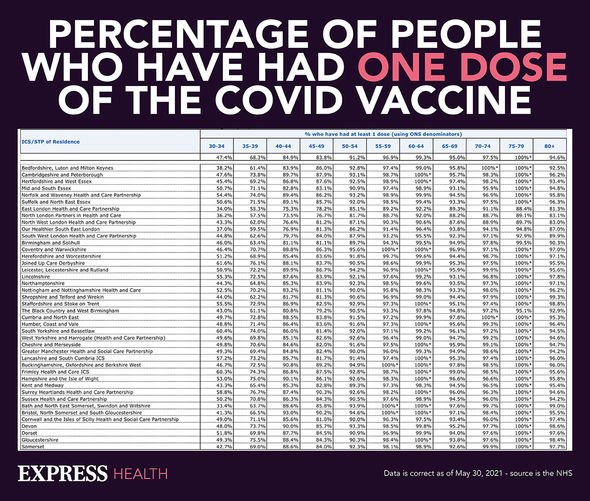 The number of people receiving both vaccine doses is continuing to rise, too.

An estimated 92 percent of all over-80s are now fully vaccinated across England.

Over half of all 50-54-year-olds are now fully vaccinated, too. 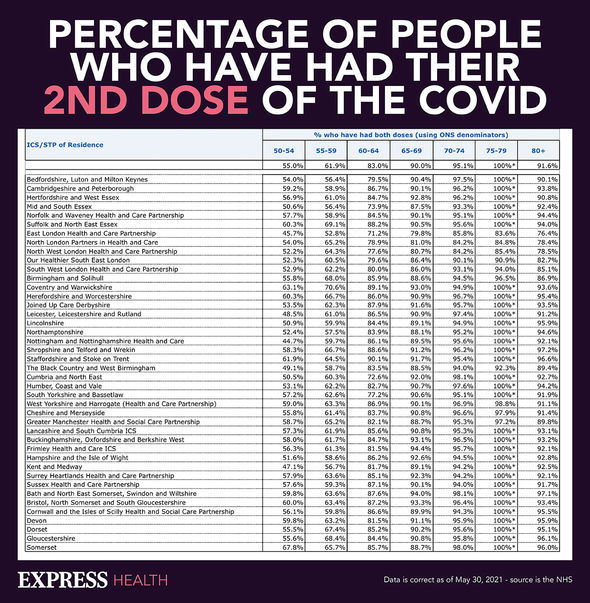 Vaccines Minister Nadhim Zahawi has admitted that there’s still more work to be done with the vaccine rollout, however.

“Over half of UK adults have now been fully vaccinated and have maximum protection against this awful virus, which is heart-warming news,” he said.

“Everyone who has received their second dose can breathe a huge sigh of relief knowing that they have ultimate protection from the virus and the new variants.

“We have come an incredibly long way in just under six months with our vaccination programme. But our work is not done yet. If you’ve had one dose, please come back for your second jab when you get the offer.”