COVID-19: Number of coronavirus infections in England has ‘levelled off’, ONS says

The number of coronavirus infections in England appears to have “levelled off” in recent weeks, the Office for National Statistics (ONS) has said.

The ONS added daily COVID-19 infections rose by an estimated 38,900 in the most recent week to 14 November, down from around 50,000 the week before.

Live COVID-19 updates from the UK and around the world They said in a statement: “The incidence rate appears to have levelled off in recent weeks.”

However, overall prevalence of coronavirus infections rose to one in 80 people from one in 85 the previous week.

The figures also found there were “substantial differences” in COVID-19 infection rates across England, with increases in London, the east of England and the South East.

The data for 8 to 14 November also showed there were rising coronavirus rates in primary school aged children.

The ONS said: “Over the last week, infection rates have continued to increase in London, the East of England and the South East, however rates now appear to be decreasing in the North West and the East Midlands.

“The highest COVID-19 infection rates remain in the North West and Yorkshire and the Humber.”

The ONS estimates for cases are based on 665,759 swab tests in people’s homes in England over the last six weeks, regardless of whether people have symptoms.

Meanwhile, infection rates appeared to be levelling off in people aged 25 and over.

Katherine Kent, co-head of analysis for the COVID-19 Infection Survey, said: “There are early signs that the national level of infections in England might be levelling off but this hides a lot of variation at a regional level.

“New increases appear to be driven by infections in younger people, with increasing levels in primary school age children.

“Elsewhere in the UK, we are seeing a similar picture with increasing infections throughout October which are now decreasing in Wales and Northern Ireland and levelling off in Scotland.”

The ONS said there were an average of 38,900 new cases per day of COVID-19 in private households in England between 8 November to 14.

This is down from an estimated 47,700 new cases per day for the period 31 October to 6 November.

The figures do not include people staying in hospitals, care homes or other institutional settings.

Meanwhile, data from the Zoe app coronavirus study run by King’s College London suggests the UK reproduction number – the R value – is around 1.

The R represents the average number of people someone with coronavirus goes on to infect.

But it said that “worryingly, the east of England and especially the Midlands are both seeing numbers still increasing with R values of 1.1 and 1 respectively”. 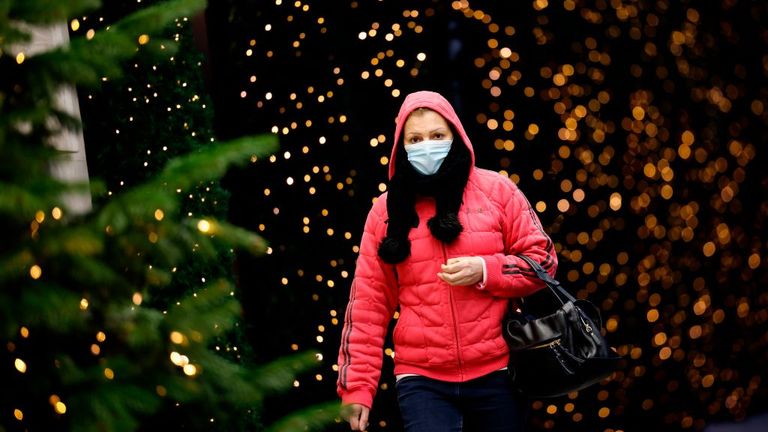 Meanwhile, the North West and the North East and Yorkshire both have R values of 0.9 as cases decline.

In the South East, London and South West, cases are not declining, the researchers said, and the R is 1.

It comes as the health secretary told Sky News he hoped a mass vaccination programme for COVID-19 would get under way “within a matter of weeks”.

Elsewhere, Pfizer and BioNTech are submitting an emergency authorisation request in the US which could allow its coronavirus vaccine to be used to treat high-risk populations in the country by mid-December.

If the vaccine is approved in the US, it suggests a similar rollout of the treatment could soon take place in the UK.