Home » Europe » COVID-19: Ahead of green travel list update, what’s the situation in holiday hotspots and how do rates compare?

COVID-19: Ahead of green travel list update, what’s the situation in holiday hotspots and how do rates compare?

Holidaymakers are holding their breath ahead of an expected update to the UK’s travel traffic light list later today.

Travel firms are hoping a number of major holiday destinations will be added to the green list, meaning people do not have to quarantine on their return.

However it remains unclear if that will happen due to fears of the spread of coronavirus variants from other countries.

Live COVID updates from UK and around world

Reports suggest holiday hotspots like Italy, Spain and France are likely to remain on the government’s amber list, while Malta could go green.

It has also been reported that Portugal could be added to the amber list, as Boris Johnson warned yesterday that the government will have “no hesitation” over moving countries off the green list if data shows it is necessary.

People arriving in the UK from amber list countries have to take two post-arrival tests and self-isolate at home for 10 days.

Sky News looks at some of the UK’s favourite tourism destinations to see the current situation for COVID-19 case rates, vaccines rollouts and entry requirements for travellers.

Spain’s overall infection rate fell to 118.5 cases per 100,000 on Wednesday, nearly halving since the end of April.

The Balearic islands, Valencia and the North African enclave of Ceuta have all recorded a 14-day notification rate of infections below 50 cases per 100,000 people – which means they meet the criteria announced on Wednesday for discos and clubs to remain open until 3am, although some restrictions will continue. 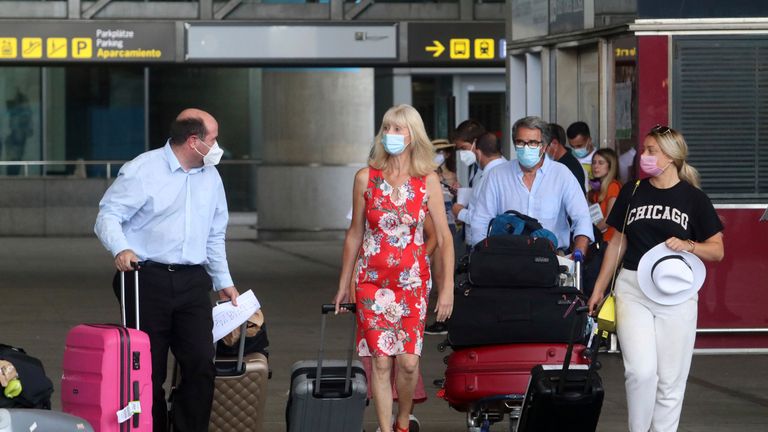 In medium-risk regions with a downward infection rate – which is most of the country – venues may also be opened but
with a 30% indoor capacity.

From 24 May, it has allowed people from low-risk non-EU countries to enter without a negative PCR test.

From 7 June, it will let in vaccinated people from anywhere in the world.

Spain relies on tourism for about 12% of its GDP and in 2019 received around 83.5 million tourists.

Portugal’s coronavirus incidence rate per 100,000 population over 14 days stands at 64.

Nearly 40% of the population of 10.3 million has received a first vaccine and almost 20% has been fully vaccinated.

Although Portugal has significantly eased its limits on movements and gatherings after the pandemic ebbed, authorities are wary of possible new surges.

Health experts say last month’s large street celebrations in the capital of Lisbon after a local football team won the national championship and the arrival of thousands of British tourists in the southern Algarve region, as well as Chelsea and Manchester City fans for the Champions’ League final, could trigger new surges.

Portugal’s government still recommends working from home. Bars and night clubs will remain closed until at least the end of August.

Italy reported 62 coronavirus-related deaths on Wednesday, a steady, continuing drop – however the daily tally of new
infections rose to 2,897 from 2,483.

Travellers can enter Italy from the UK without any quarantining provided they fill out a passenger locator form, can show a negative COVID test within the past 48 hours and that they notify their arrival to the local health authority. On 18 May, it pushed back a nightly curfew to 11pm and eased other curbs in low-risk regions.

The curfew will begin at midnight from 7 June and be abolished from 21 June.

The number of new COVID-19 cases in France held below 10,000 for the second day in a row on Wednesday.

French teenagers aged 12 to 18 will be allowed to get a coronavirus vaccine from 15 June. France allowed cafes, bars and restaurants to offer outside service from 19 May, with indoor dining to follow on 30 June.

It also pushed back a nightly curfew by two hours to 9pm. That will be moved to 11pm from 9 June and scrapped
completely on 30 June.

Shops, museums, cinemas and theatres reopened on 19 May.

Foreign tourists with a “health pass” will be able to visit from 9 June.

Anyone who has been fully vaccinated and tested negative via a PCR or antigen test within the previous 48 hours, or who has had a positive COVID-19 test between two weeks and six months prior, will be able to get the certificate which will be available as either a paper or app version. Latest statistics for Malta show there were just seven infections per 100,000 people reported in the past week.

More than 51% of the country’s population has been vaccinated – one of the highest rates in the European Union.

From 1 June, the Maltese authorities have required a vaccination certificate or a negative PCR test result for people travelling from and to the island.

In 2019, before the pandemic struck, Malta welcomed 2.7 million international visitors. This year, they expect little more than 35,000 throughout the year, marking an 80% decline.

Greece, along with five other European Union nations has already introduced a vaccination certificate system for travellers, ahead of its rollout across all 27 members of the bloc.

As with the French health pass, the certificates are being issued to people who are fully vaccinated as well as those have already contracted the virus and developed antibodies and others who have had a PCR test within the past 72 hours.

The documents will have both digital and paper forms.

Greece, which depends heavily on tourism, has been pressing for a commonly recognised certificate that uses a QR code with advanced security features.

The country reopened restaurants and bars from 3 May and some “organised” beaches on 8 May.