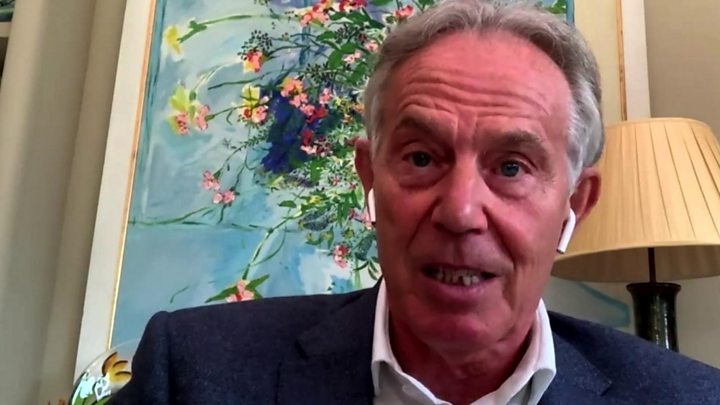 Former Prime Minister Tony Blair has said it is “common sense to move in the direction of digital IDs” as part of efforts to fight coronavirus.

Mr Blair said there should be a record kept by the government of those vaccinated against the virus.

The government recently set out plans to change laws to enable the use of digital identity across the UK.

As prime minister, Mr Blair launched a compulsory ID card scheme, but it was scrapped by the coalition government.

Speaking to the BBC’s Newscast podcast, he said that once a coronavirus vaccine is in use “you’re going to want a record of the fact you’ve been vaccinated”.

“You’ll want a record kept by the government of who’s been vaccinated – this will be essential, again, to restoring confidence,” he added.

The former PM argued that improvements in technology meant privacy issues “can be dealt with”.

“You don’t need a large amount of information,” he said adding: “People give a lot more information to their supermarkets than they do to the government.”

Responding to Mr Blair’s comments, Silkie Carlo, Director of Big Brother Watch – a civil liberties campaign group – said: “The idea of digital ID and vaccination checks could easily lead to a health apartheid that few would expect of a democratic country.

“Digital IDs would lead to sensitive records spanning medical, work, travel, and biometric data about each and every one of us being held at the fingertips of authorities and state bureaucrats.

Mr Blair’s comments come after the government announced plans to update existing laws on identity checking to allow digital identity “to be used as widely as possible”.

It is does not propose resurrecting the ID card scheme, but is “exploring how secure checks could be made against government data,” according to the government announcement.

Digital Infrastructure Minister Matt Warman said: “Digital technology is helping us through the pandemic and continues to improve the way we live, work and access vital services.

“We want to make it easier for people to prove their identity securely online so transactions can become even quicker – it has the potential to add billions to our economy.”

Mr Blair was a keen advocate of ID cards for all UK citizens, as a way of combating terrorism after 9/11, but it was later billed as an “entitlement card” to combat benefit fraud and illegal workers.

The former PM has argued since leaving office that ID cards are the only way to combat illegal immigration.

The ID card scheme began its rollout in November 2009, under Gordon Brown’s premiership, but was scrapped in 2010 by the Conservative/Lib Dem coalition government which saw it as an infringement of civil liberties.

He said he didn’t think the 14 day quarantine period for those returning from certain countries abroad was “necessary”.

“The question is not how you eliminate the risk, it is how you contain it,” he added.

Mr Blair also said it was a “mystery” to him why there hadn’t been a more coordinated international effort to tackle the virus. “I honestly don’t understand the reason for that not happening,” he said.

Speaking of poorer countries in Africa, he said: “They can’t do lockdown, it’s just not possible, but as a result of the global crisis they’re facing real food security problems, real supply problems.”

On vaccines, he said he hoped we “do not end up in a situation where wealthy countries get the vaccines and poor countries are scrabbling for them. This wouldn’t just be morally wrong, it would be totally against our own interests”.