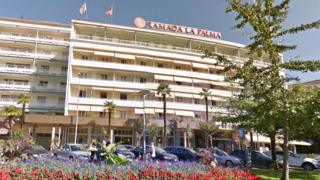 A 22-year-old British woman has been found dead in the bathroom of a hotel in southern Switzerland, police say.

Her 29-year-old German boyfriend has been taken into custody and reportedly told police that the death was the result of a “sex game” that went wrong.

The victim has not been officially named. Local media say a post-mortem examination has shown she died of suffocation.

The UK Foreign Office said it was offering assistance to the family.

Swiss media said the woman had been staying at the Hotel La Palma au Lac in Muralto, in the district of Locarno, with her boyfriend, who lives in Zurich. She was found dead on Tuesday morning.

Police say they are still investigating the circumstances of the death. Reports say officials are looking into the possibility of an intentional killing.

Some hotel guests told Swiss news outlets that they had heard arguing coming from the couple’s room the night before she was found dead.

The UK Foreign Office confirmed it was offering consular assistance to the family following the death of a British citizen.