LONDON — Two days of unseasonable sunshine in Britain this week have resulted in more than the shedding of hats, scarves and winter coats: They have also brought the highest temperatures ever recorded in the country in winter.

Temperatures peaked on Tuesday at 21.2 degrees Celsius (70.16 Fahrenheit) in Kew Gardens, London, the hottest February day in Britain since records began in 1910, according to the Met Office, the national meteorological service.

Warmer than an average summer day in Britain, the record set on Tuesday ended a short-lived run for Porthmadog, Wales, which had laid claim earlier in the day with a high of 20.8 degrees Celsius (69.44 Fahrenheit).

February’s new maximum temperature record was also snatched from the rural community of Trawsgoed, Wales, which had set a record on Monday with a high of 20.6 degrees Celsius (69.08 Fahrenheit).

The run of unusually hot days smashed the previous record of 19.7 degrees Celsius (67.46 Fahrenheit), set in the Greenwich area of London in February 1998.

“To get more than 20 degrees Celsius in May would be a very pleasant day. So to get that in February is obviously very significant,” said Grahame Madge, a spokesman for the Met Office. “Whether we will see that again next winter remains to be seen.”

The weather could not have been more different from a year ago, when Britons found themselves up against a polar vortex nicknamed the “Beast from the East.” On one of the coldest days in the U.K. for three decades, snow and high winds closed schools, stranded drivers and disrupted flights and trains.

The subzero temperatures extended far beyond Britain last winter. Norway recorded temperatures of minus 43 degrees Fahrenheit (minus 42 Celsius) at the start of March, and snow fell in Rome for the first time in six years.

The unseasonably balmy temperatures that sent Britons scrambling for sunglasses and T-shirts this week also broke records in Ireland, where the national meteorological service declared the February temperatures to be the hottest since 1960. 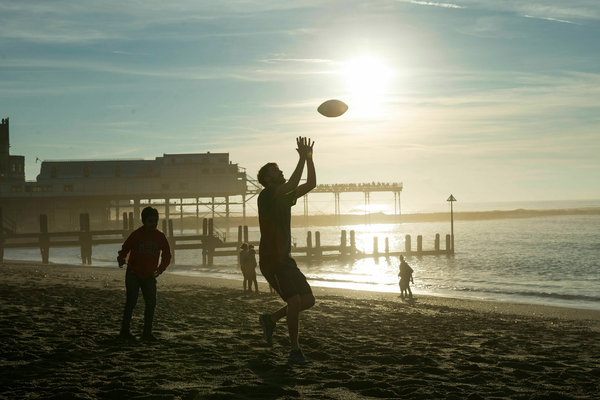 On the Continent, the Netherlands beat its oldest record for the warmest February day with a temperature of 17.8 degrees Celsius (64.04 Fahrenheit).

In France, temperatures were as high as 22 degrees Celsius (71 Fahrenheit), far above the average temperature for the time of year, and a number of towns in Sweden also experienced their hottest ever February days.

But as moods lifted with the unexpected taste of summer, some voiced a creeping sense of concern at such a dramatic shift from the norm.

The record temperature in Britain is “concerning, given what we known about climate science,” Leo Hickman, the director of a energy and climate fact-checking website, wrote on Twitter.

“This unseasonably warm weather is part of a global trend of record temperatures and unprecedented extremes,” Caroline Lucas, the former leader of Britain’s Green Party wrote on Twitter. “This is what climate breakdown looks like.”

The Met Office tied the warm conditions to a vast high-pressure area centered over Germany. Warm air is being drawn up to Britain, prompting the record-breaking heat.

Mr. Madge, the Met Office spokesman, said that the same weather system was also the cause of last year’s freezing temperatures — but because that high-pressure area was centered over Scandinavia, cold air was drawn from the Arctic.

The meteorologists said they could not definitively link the extreme heat to climate change until a full study had been carried out, but Mr. Madge said: “We would expect temperatures in winter to be influenced by global warming and for temperatures to be warmer on average.”

“Simplistically, it does fit the pattern,” he added.

Those caught on the back foot by the climbing temperatures should not store away those heavy coats just yet: February’s regularly dreary weather will return as soon as the high-pressure system dissipates.

That could be as soon as Thursday, Mr. Madge said.