Exporters to the EU face 7,000-truck-long queues in Kent and two-day delays to trade after the Brexit transition period ends, the government has warned.

Imports will also be disrupted in January, according to a letter from cabinet minister Michael Gove to the freight industry, seen by BBC News.

It also raises the prospect of a winter spike in Covid-19 leading to absences of port and border staff.

The transition period is due to expire at the end of the year.

Mr Gove, the Chancellor of the Duchy of Lancaster, responsible for no-deal planning, wrote to logistics groups with the government’s “reasonable worst-case scenario” planning for when the UK leaves the EU’s single market and customs union rules on 1 January.

He will outline the scenario work, which the Cabinet Office stressed is not a forecast, in the House of Commons later.

The picture of chaos at the border might be familiar from a similar set of projections made for no-deal Brexit a year ago as part of what was known as Operation Yellowhammer.

The government says this is not a prediction but an illustration of what could be reasonably expected.

According to the Cabinet Office document, in its reasonable worst-case scenario, there may be “maximum queues of 7,000 port bound trucks in Kent and associated maximum delays of up to two days”.

“Both imports and exports could be disrupted to a similar extent,” it says.

This is caused by up to 70% of freight trucks travelling to the EU being unprepared for new border controls, including up to half on the busiest “shorts straits” routes Dover to Calais and in the Eurotunnel.

The EU is expected to impose full goods controls on the UK, stopping all freight without the correct documentation at the end of the transition period on 1 January.

The disruption is assumed to build in the first two weeks of January, and could last three months, or longer should France rigorously apply Schengen passport checks on hauliers at Dover and the Channel Tunnel. 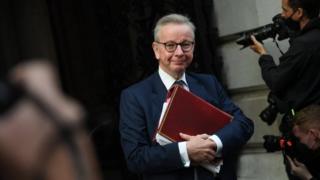 The purpose of this stark communication is to try to get traders to act now to get ready for new border formalities that could help mitigate the disruption.

Mr Gove told the industry that this needs to happen irrespective of whether or not there is a deal in the UK-EU trade negotiations.

The freight industry itself has expressed, in recent days, its concern that the government is not fully prepared with the plans and systems in place to deal with post-Brexit changes, particularly against the difficult economic backdrop of the pandemic.

A recent meeting between the industry and government was described as a “washout”, with insiders describing the relationship as “fraught” and hauliers fearful that they were being cast as the “fall guys” for delays and disruption likely in January.

There are further issues should there be no trade deal agreed. Hauliers would have to rely on special permits rationed by the Department for Transport, though a mutually beneficial deal here is possible.

But discussions on these issues await settlement of the impasse in negotiations on state aid and fisheries.

Industry sources have raised the possibility that the UK would have to sign up to EU rules limiting driver hours, in order to get access to EU roads.

And there is a specific new reference to France imposing strict passport checks at the “juxtaposed controls” currently designed to offer seamless travel across the Channel.

“There also remains a risk of continuing disruption caused by Schengen controls being applied rigorously at the juxtaposed controls at the Port of Dover and Eurotunnel,” the document says.

Mr Gove, in his letter, says the government will introduce a “Smart Freight” IT service to enable drivers and hauliers to complete a border readiness check.

The information will be shared with Kent Police to ensure only compliant vehicles travel to the Port of Dover and Eurotunnel.

An updated model for border arrangements is also expected in the coming days.

But the limited level of trader readiness is a real problem. Many of the changes are required not just because of the possibility of there not being a trade deal with the EU, but as a result of formally leaving the single market and customs union.