European Union bosses are prepared to draw up plans for permanent customs if MPs can form a majority for the strategy in Westminster, according to Mr Barnier. But despite the offer, he thinks no deal is the “more likely” scenario ahead of Theresa May’s third attempt to win support from MPs for her Brexit agreement – which later failed by 58 votes. Speaking in Poland, Mr Barnier said: “We are open to work on the principle of a permanent customs union should the UK decide to take this path.”

He added: “A member state has the right to leave the Union. The Union is not a prison. It’s not a place where countries have to stay against their will. If there’s a door to enter the Union there must also be a door to exit.

“A positive vote would be best outcome. Let me be frank, without a positive choice the default option will be a no deal, which has become more likely.

“It was never our scenario but EU27 is now prepared. What we now need is a positive choice to move forward.” 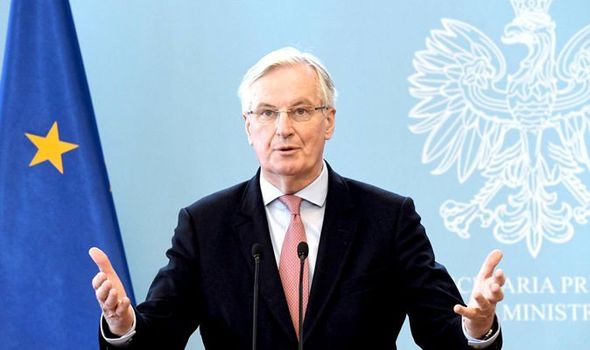 He told MPs if they fail to back the Prime Minister’s deal the UK would lose its right to extend Article 50 talks.

He said the Government would be forced to go back to Brussels and would be at the mercy of EU leaders.

Mr Cox said: “If this withdrawal agreement is not approved, then that extension will expire on April 11. That means that any other extension that this House might desire to be agreed by the union would be at its discretion, subject to the veto of 27 leaders.

“Therefore, by this evening, if the 11pm deadline expires and the agreement has not been approved, that legal right will expire with it. This is therefore the last opportunity to take advantage of our legal right.”

Support is growing for Britain to be offered a lengthy Article 50 extension, which could see the country remain in the EU until the end 2020.

Polish prime minister Mateusz Morawiecki said Brexit could be delayed for up to 12 months in over to avoid no deal chaos.

After his own meeting with Mr Barnier, the Polish leader said: ““We are open to consider a motion to extend the process of Britain’s withdrawal from the European Union by six, nine or 12 months.”

He added: “These options are all acceptable, because we want the UK to stay and if that would not be possible to have an orderly Brexit.

“For us the basic thing would be to have the UK stay in the EU. We have always wanted that and I personally have been persuading Prime Minister May to that, but these are obviously internal affairs of the UK, and three years ago they made their decision.”

The extra time could be used to push for a soft Brexit, including a customs union and single market alignment.

An EU diplomat said: “A UK-wide customs is at heart of the Irish backstop.

“We could lift that out and add the ambitions that we have on either side to complete it.”

Member states, including the French and Dutch, would insist on tough state aid provisions and single market regulations being followed before allowing Britain into the EU’s customs union.

This “dynamic alignment” demand will see Britain forced to follow EU regulations as they change.