Boy attacked by bully as teenagers film assault at school 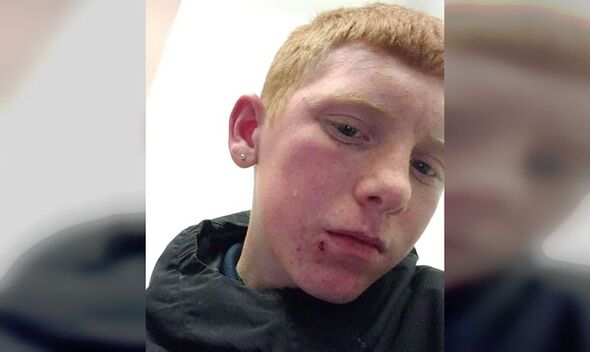 A mother has blasted her 14-year-old son’s school after the boy was “knocked out in an attack by another pupil”.

Katie Gidman says Kenzo Mason was pushed before being punched and his head stamped on at St Peter’s Academy in Fenton, Stoke-on-Trent.

The teen was taken to hospital after being left with bruising and swelling on the side of his cheek following the attack on Monday.

Now Katie has slammed the school after claiming it was the fourth time Kenzo has been assaulted on the premises in a year. She has also alerted the police, Stoke-on-Trent Live reports.

It appears as though the attack was pre-planned as other children had pulled out their phones to film.

The 35-year-old mum, from Fenton, said she received a phone call from St Peter’s to say her son had been ‘kicked in the face’. She added: “He said at break time he was walking along the path and some kids already had their phones out when a boy pushed him. My son got him in a headlock, but the boy punched him in the head twice and stamped on his head three times.

“He’s got bruising and swelling and we had a four-hour trip to the hospital to check him over because he was knocked unconscious. They checked all his vitals, made sure he could walk in a straight line and gave him pain relief.

“I don’t know the boy who did it, but we’ve been down to school and they’ve had his parents in. Apparently it was something to do with name calling, it’s absolutely disgusting. After the video of the attack was shared, I called the police.”

The latest incident comes after Stoke-on-Trent Live reported on another St Peter’s pupil being attacked last month. Katie has criticised St Peter’s for its handling of such assaults.

She added “The school is absolutely hopeless. It’s not the first time he’s been attacked, it’s the fourth.

“They didn’t even ring me, my son’s friend called and told me he was being kicked and punched. Then the first aider rang me half an hour later and said they were sending him home.

“They said I’d get a phone call when school finished at 3pm, but I had to go in the following morning because nobody rang. I just had a text asking why my son wasn’t in school.”

Katie says Kenzo decided to return to school the following day after learning that the pupil responsible had been excluded. But she is constantly worried about him and is now forced to drop him off and collect him amid fears he could be attacked outside the school gates.

The mum-of-four added: “At 14-years-old, the school is only five minutes away from the house, he should be able to walk. I shouldn’t have to be collecting him. I fear that one day he could be coming home in a body bag.

“I’ve spoken to him a few times about moving schools, but all of his friends are at St Peter’s.

“His older sister is also at the school, but I won’t be sending my younger children there, not a chance.”

“Earlier in the day, a teenage boy was attacked by another group of boys, who are believed to be between 13 and 14-years-old, at an address on City Road. The victim, aged 14, was reportedly knocked unconscious and suffered injuries to his head and face.”

Stoke-on-Trent Live and Express.co.uk has contacted St Peter’s Academy for a statement.

Anyone with information, can contact Staffordshire Police on 101, or report online at the website, quoting incident number 557 of January 9.