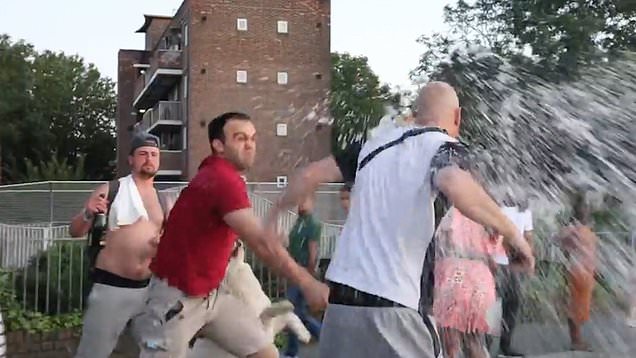 A man smashed a wine bottle over another man’s head yesterday as a bloody brawl broke out over dogs.

Footage shows a calm, sunny evening on the Thames Path in Greenwich descending into chaos as violence broke out in front of a crowd of terrified onlookers.

The trouble appeared to start when a large dog pounced on a smaller dog that was passing.

As the dogs barked, a man in a red polo shirt holding a bottle, who appeared to be with the woman with the small dog, angrily confronts the owner of the large dog.

Almost immediately, a bald man in a white t-shirt gets between the two.

It is not clear if the man in the white t-shirt knows the owner of the larger dog – a woman in a red dress who is standing off to the side.

The small dog owner can be heard accusing the big dog of trying to bite her, while the man in the white shirt can be heard saying: ‘You don’t want that dog eating you mate’ and ‘you tried to be mean to a girl’. 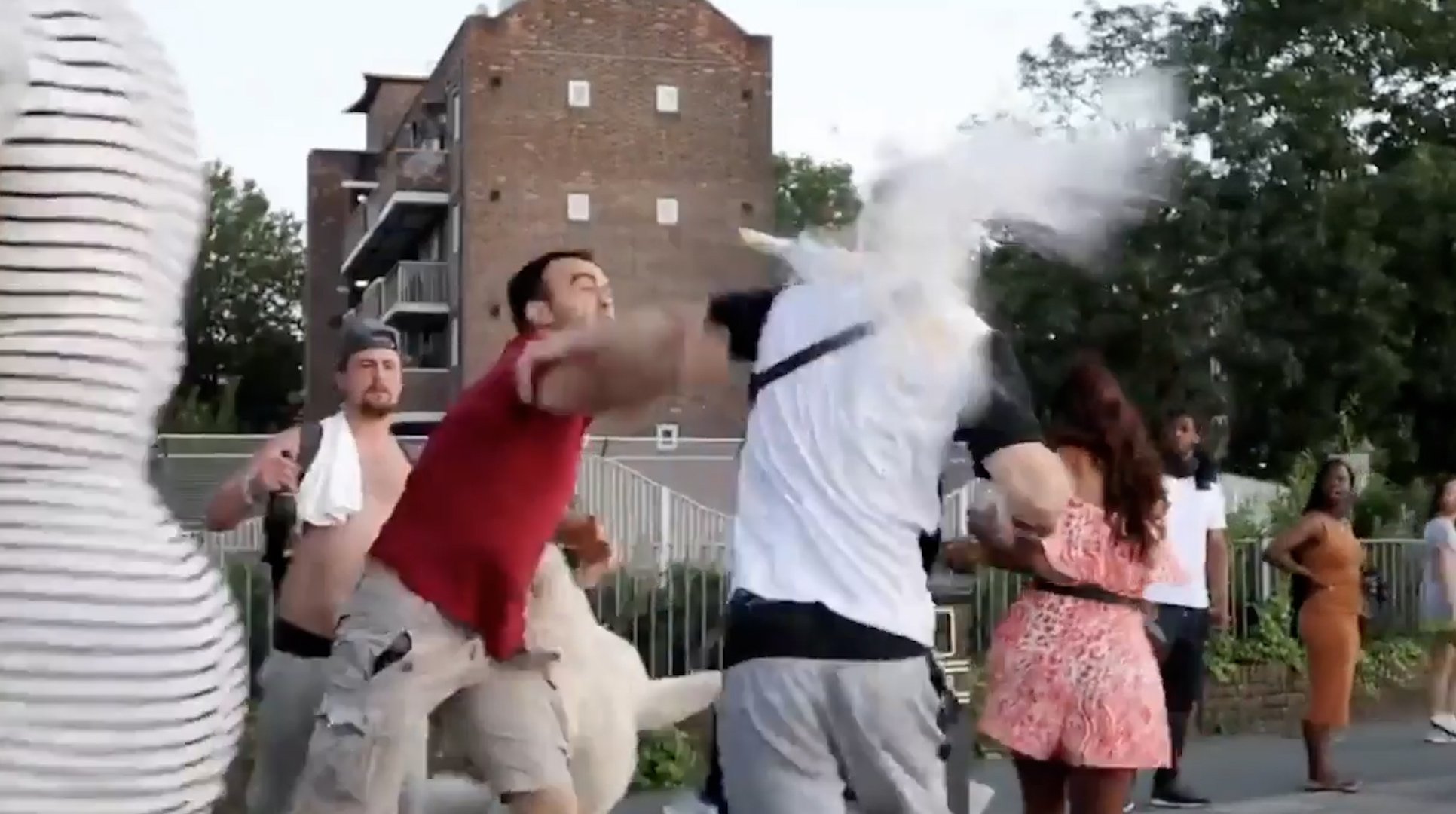 While the dogs calm down, the men keep getting angrier and more people gather to try and diffuse the situation.

Then out of nowhere, a man in a red Adidas t-shirt stumbles into the frame and punches the man in the polo shirt.

Incensed, he raises the bottle he has been holding and lunges towards the bald man in the white t-shirt, who tries to kick him away.

A smash is heard as the bottle comes down on the bald man’s head, breaking instantly and sending blood spilling down his face.

The wounded man is then heard shouting ‘give me the f***ing bottle’ as he grabs one from another man and heads towards his attacker.

Several people step between the pair in an attempt to calm the fray, but the men continue arguing.

At one point in the two-minute long footage, the man in the red polo shirt charges towards the man in the Adidas top who landed the first blow, but he manages to slip away unharmed.

The polo-shirt man and bald man, pursued now by a crowd, inch closer together before the bald man takes a swipe.

A chase ensues, with the bald man hitting the man in the red polo shirt with his bloodied hands.

The video ends with the men still fighting as the woman with the small dog cries and screams loudly.

The bald man, covered in blood from his wound, has been knocked to the ground and is still trying to land blows as onlookers move in to try to break up the fight once again.

In the final seconds of the footage, one man throws a bottle at the guy in the red polo shirt, who starts to run away.

The Metropolitan Police said it was aware of the video, but that the incident ‘does not appear to have been reported to the police’.

The footage was shared by London & UK Crime on Twitter, where it has been viewed more than 900,000 times.

It was originally posted by an Instagram user with the comment: ‘ TRIGGER WARNING A day in a life… So I was just out with the lads enjoying the sun and playing around with my new camera when I caught this (no commentary from me).

Social media users were torn over who was to blame, with the chaotic footage difficult to untangle.

The incident happened on what was the hottest day of the year so far in England and Wales, with temperatures soaring above 31C.